PREVIOUSLY ON MASTERCHEF AUSTRALIA: I dunno man, I thought I knew this show, y’know? I thought I had it all figured out. I thought I had it clocked, beaten, done and dusted. I spent the better part of the last decade or so breaking myself over backwards trying to nut the ins and outs of MasterChef out and I figured I had a pretty good grasp of it. But then last night rolls around and we’re doing fucken CHICKEN FEET ICE CREAM for god’s sake so clearly what the hell do I know.

Mystery Box challenge number one for the season brought with it just a truly unholy pile of chicken feet, and while 99% of everyone used that particular ingredient in a totally normal fashion, Ben Ungermann, who is not long for the competition, went fully off the deep end by putting that into an ICE CREAM.

It’s something not even the judges were expecting. Not even Jock Zonfrillo, who made his bemusement about the whole thing repeatedly clear.

The idea of chicken feet alone is probably going to wrinkle the nose of most caucasian palates, but shoving the foot of a chook into a bone cold dessert is borderline insanity. And yet somehow it turns into a critically beloved dish? This madman, this animal, this absolute lunatic, went and turned this… 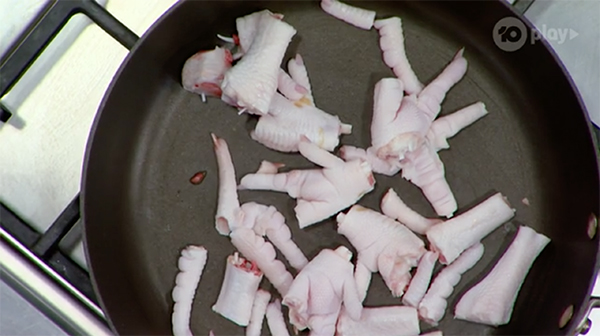 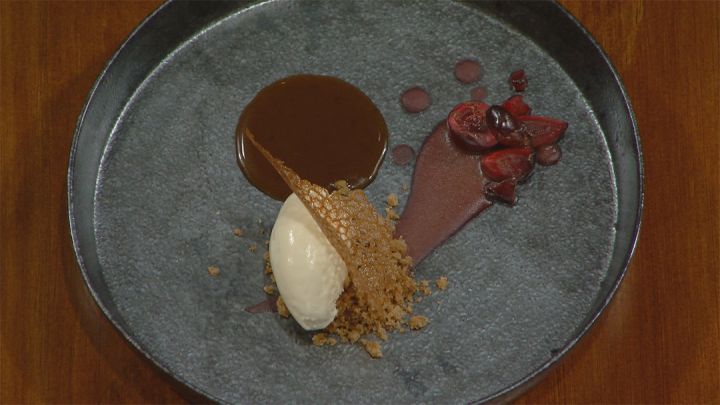 But let me be very clear about this: I don’t care how delicious it turned out to be, nor do I care how common using other animal fats as a caramel base is. That’s a horror show. In fact, I don’t know what’s more fucked up: The concept of the dish itself, or the fact that we spent all goddamned episode being promised a full-on chicken feet ice cream, only for it to wind up as a caramel accoutrement.

Honestly, if you’re going to promise me that much, at least have the common decency to deliver the product. Lean in fully. Give me nightmares. I want fucked up talons jutting out of a cone like a big scratchy Bubble-O-Bill.

I’m not the only one utterly bamboozled by all this either. Peep just a handful of the social media response to the whole shebang.

Chicken feet ice cream?
Ok so now we know why he got arrested.#MasterChefAU

Ben: doesn’t want to be known as the ice cream guy

We still don’t know what Ben did, but someone definitely needs to be arrested for the chicken feet ice cream tomorrow. #MasterChefAU

The idea of eating Chicken Feet Ice-Cream knowing it will probably end up being fantastic has us like #MasterChefAU pic.twitter.com/7p5bGyFDSQ

And all that doesn’t even graze the surface of Simon‘s attempts at a chicken feet jelly, which became a chicken feet mousse when that didn’t work because that’s just the kind of totally normal thing you think of when this competition is squeezing your brain like a brown banana in a bench vice.

When you bring the first root home after iso and he pops before the belt comes off.