MAFS bloke Michael Brunelli has shared an update on how his fiancé Martha Kalifatidis is doing after falling ill while on vacation.

ICYMI: The pair were forced to cut their lengthy Europe trip short after the beauty influencer caught a viral infection.

He went on to document their return to Australia and subsequent treatment of her illness before going quiet on social media.

He has now addressed their absence and provided an update on his fiancé’s health.

“So it’s been a little while…” he wrote on Insta, adding that Kalifatidis is “slowly getting better”.

Brunelli also recounted rushing Kalifatidis to hospital one night, only to be “pulled over by police.”

“I got pulled over by police at 12am after taking Martha to the hospital (she’s OK) for having these on my plates,” he wrote. 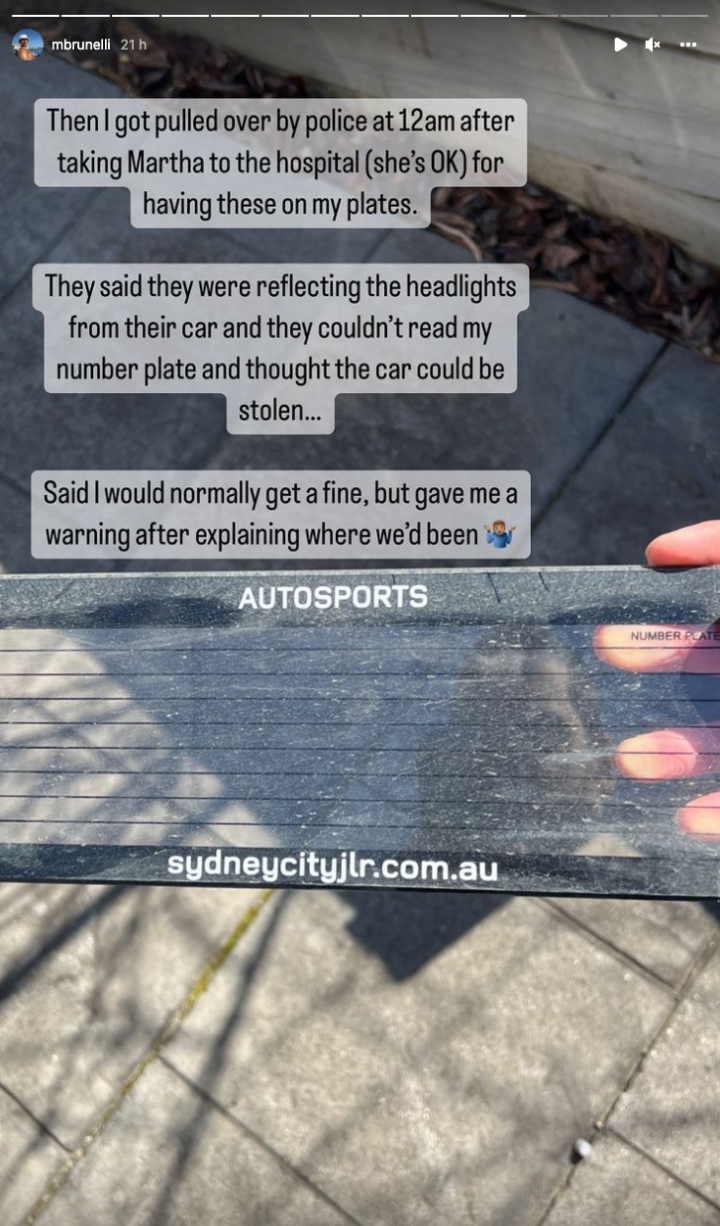 In addition to his fiancé’s health battle, he revealed he’s also had issues of his own.

He told his followers he’s been suffering from abdominal pain “for a few months” and even underwent an X-Ray and a CT scan. 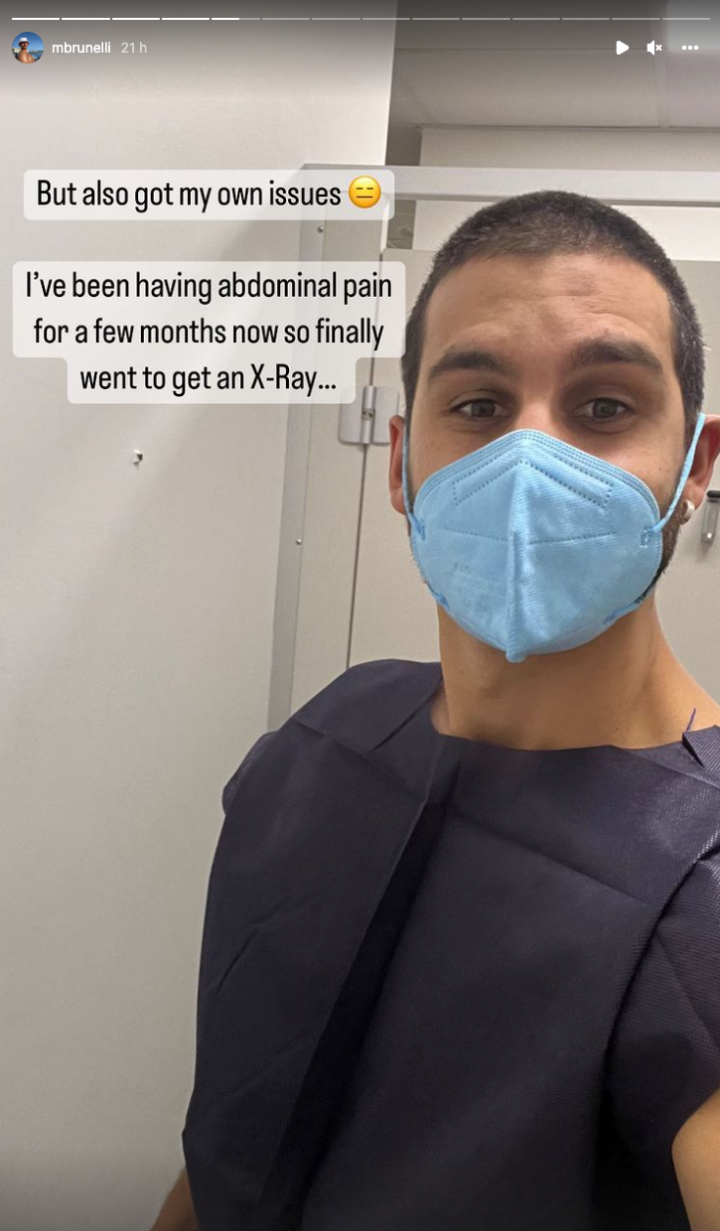 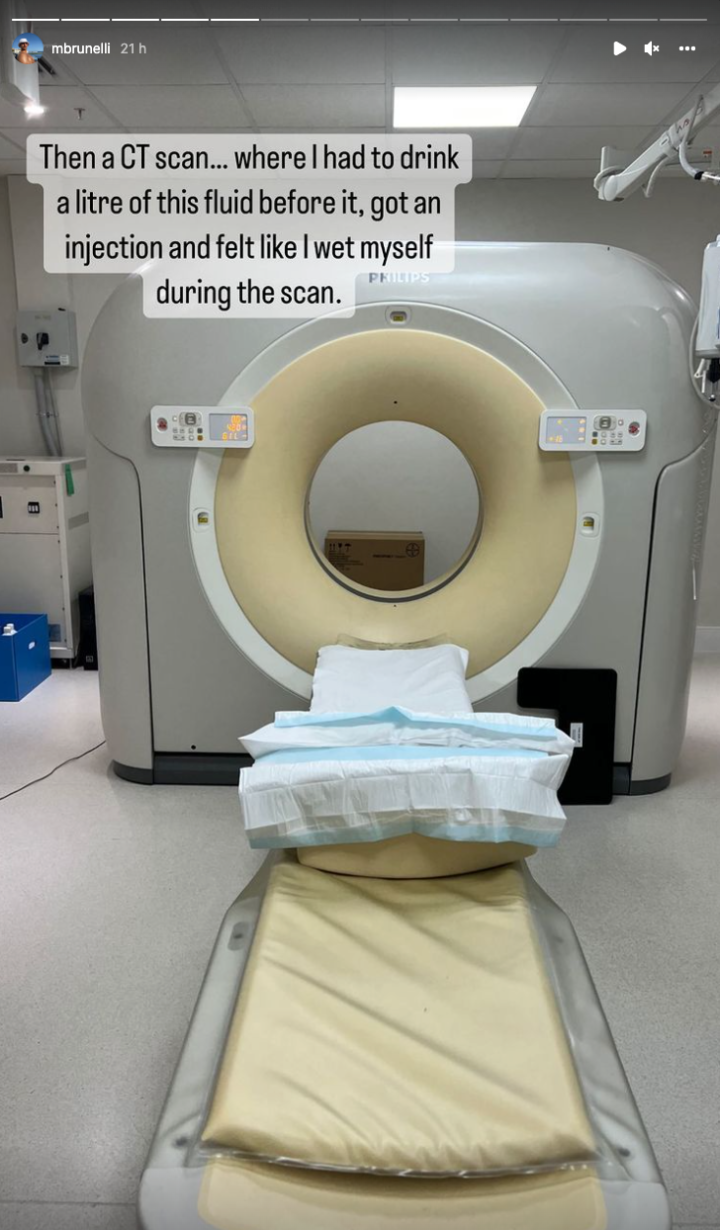 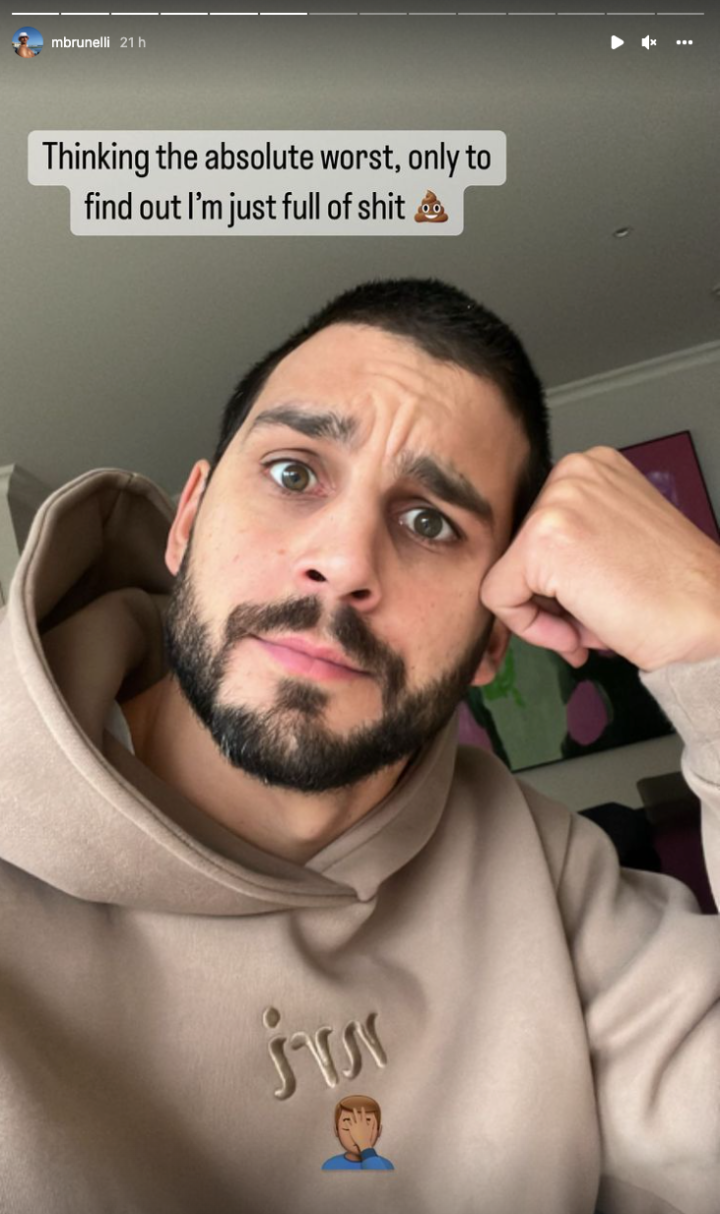 Upon their return to Australia, Brunelli shared a series of Instagram Stories informing his fans of what had happened.

“I’m obviously getting a lot of DMs about Martha after my [Instagram] Stories over the last couple of days, but just want to reassure everyone she is okay,” Michael wrote via IG Stories.

“She’s getting better, it’s nothing you need to worry about.

“I’m just showing you kind of what’s going on in our lives while she’s not posting.”

Kalifatidis also took to Instagram to reveal that they had abruptly ended their trip.

“Hi everyone, I know I’ve been quiet on here,” the influencer wrote via IG Stories.

“I’ve been bedridden for a few weeks, but I’m finally home and getting the care I need. I’ll be back soon!” 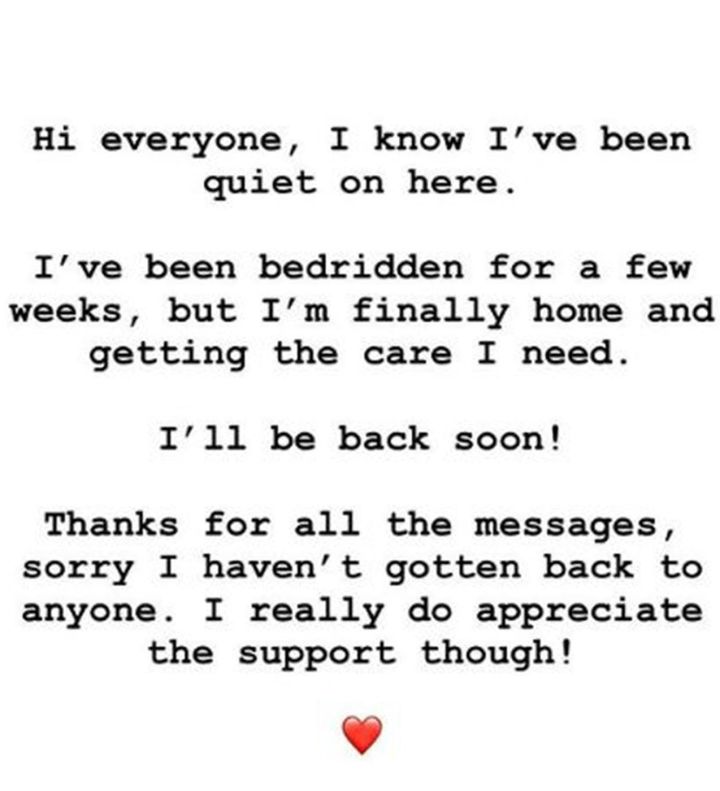 Brunelli also made a post about the trip, writing: “Cut our trip short, but that’s life. So we came back a month early, to be around family and more comfortable at home.

“But we had an amazing three months overseas, experiencing different cultures, relaxing, having fun and seeing friends! ⁣Something we are both truly appreciative and grateful for!”

He added that not all trips go entirely to plan, but “that’s just life”.

“We aren’t getting caught up in the ‘what ifs’, because it doesn’t serve us. ⁣Health is the priority above all else and that’s what led us home.”

Upon returning, Brunelli has documented his fiancé’s health journey.

“I just want to say a big thank you to everyone who has reached out and messaged us asking about Martha,” he wrote on Instagram.

“She’s been offline and unwell with a viral infection. It’s taken a toll on her energy levels, but she’s okay and on the mend.”

The couple really do be having the worst luck with vacations.

Last year the pair took a trip to LA and it did not quite go to plan.

“Guys, LA was terrible!” Martha said during an IG Q&A.

“We went back because we loved it so much when we were there two years ago… but it’s not the same.

“It’s changed so much since COVID. The homelessness situation is so bad. I can’t even begin to describe it. We drove past a lifeless body face down in a gutter outside a gas station on Melrose, fucking Melrose! [People] driving and walking past it completely unbothered!”

The reality star continued: “It was horrific, I couldn’t eat for the rest of the day after seeing that. I felt sick. The crime rate is up 300%! Every Uber driver told us to beware, don’t wear anything flashy because [people] have been getting robbed at gunpoint.

“Nowhere is safe. Even Beverly Hills is super dangerous and experiencing [violent] crimes daily. The news over here is so different, we don’t hear about anything going on, so we booked a stay here completely unaware.”

She added, “The mayor of LA just announced any tourist wanting to visit should stay away! It’s such a scary time, we are so lucky in Australia! I will not be coming back to LA/USA for a very long time! It’s been horrifying! We felt completely unsafe the entire time!” 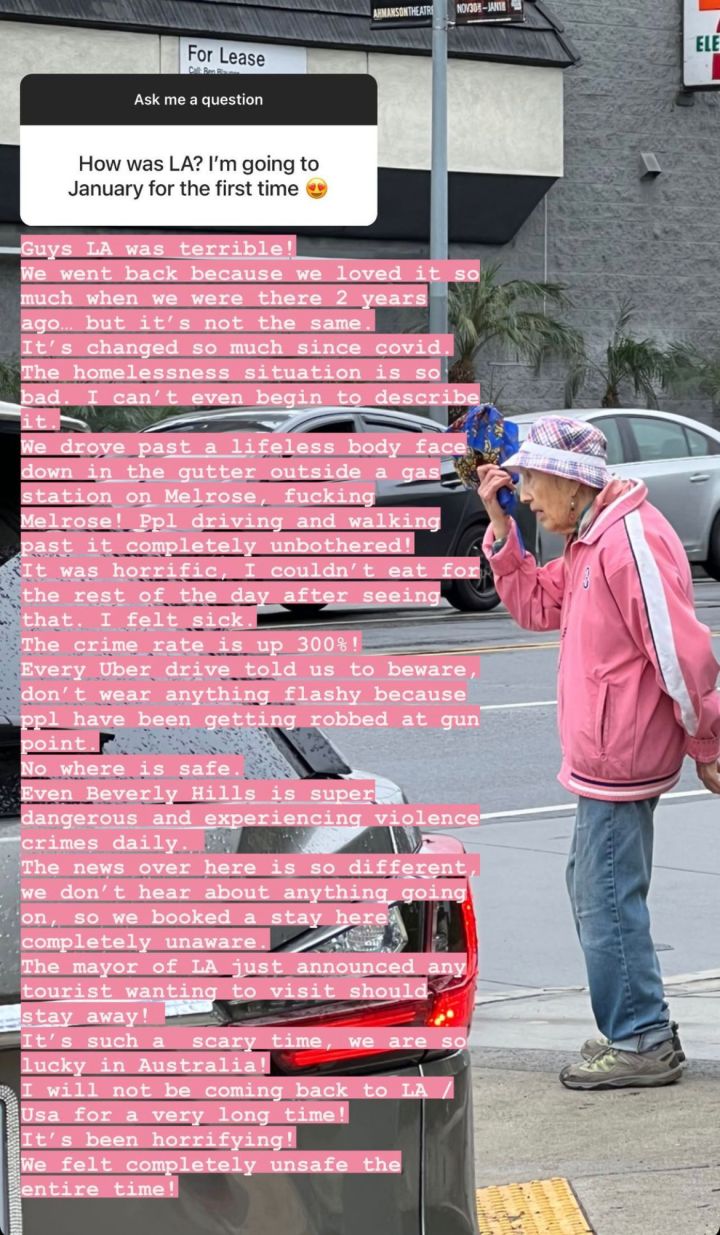 In another slide, another follower asked where they planned on going next, to which she responded, “We had planned to do 10 days in NYC, but we’ve cancelled. We looked at going to London for the 10 days and maybe doing a few days in Paris, but due to COVID we can’t risk it.”

She continued: “The UK are implementing more lockdown laws again and we don’t want to be stuck away from our family for Christmas. The truth is, it’s just not a good time to travel. We thought we would be fine, we didn’t want COVID to rule our lives, so we decided to come [overseas]. 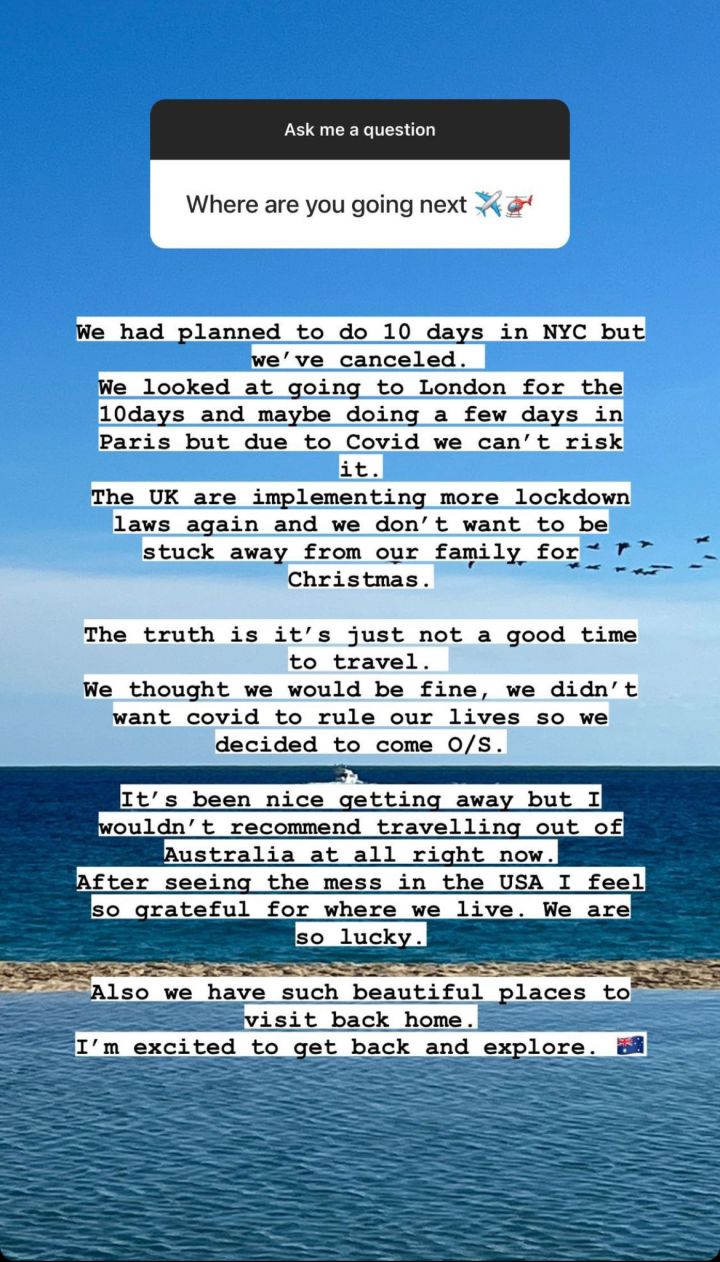 She added, “It’s been nice getting away, but I wouldn’t recommend travelling out of Australia at all right now. After seeing the mess in the USA I feel so grateful for where we live. We are so lucky.

“Also we have such beautiful places to visit back home. I’m excited to get back and explore.”

In another slide, Kalifatidis was asked if she was nervous about getting COVID overseas and she said: “[To be honest] yes, we have been avoiding crowds etc. Although they are diligent about wearing masks and checking vax certificates.” 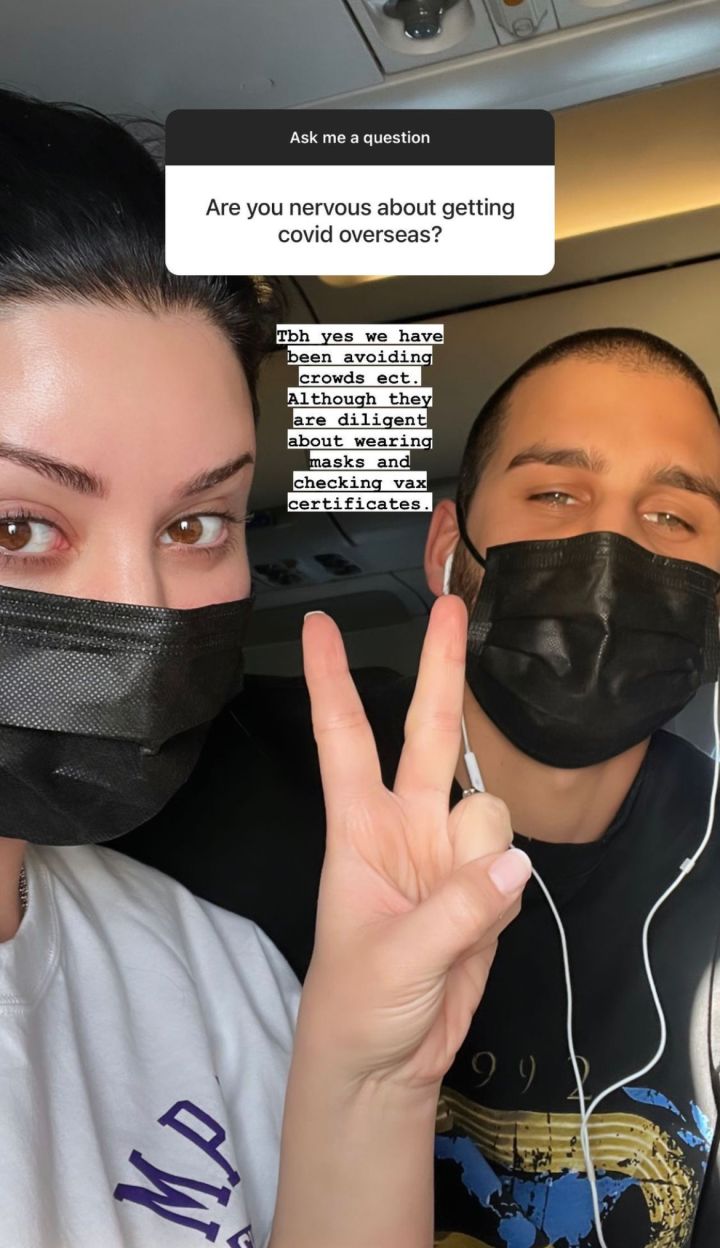 She went on to reveal that she’s heard “many similar stories about LA” from her followers, before sharing some DMs sent to her by fans. 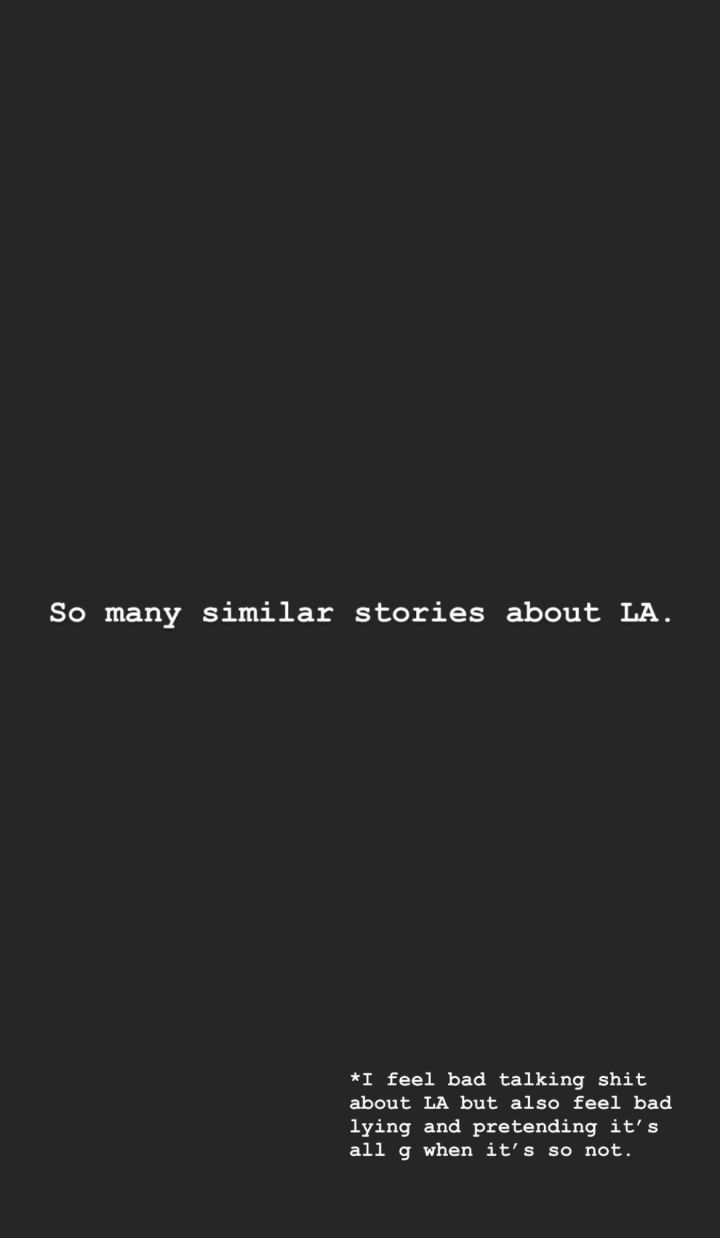 One follower told the reality star that her daughter had been robbed during her visit to the States.

Another follower wrote that she moved to America last month and is so “scared.” 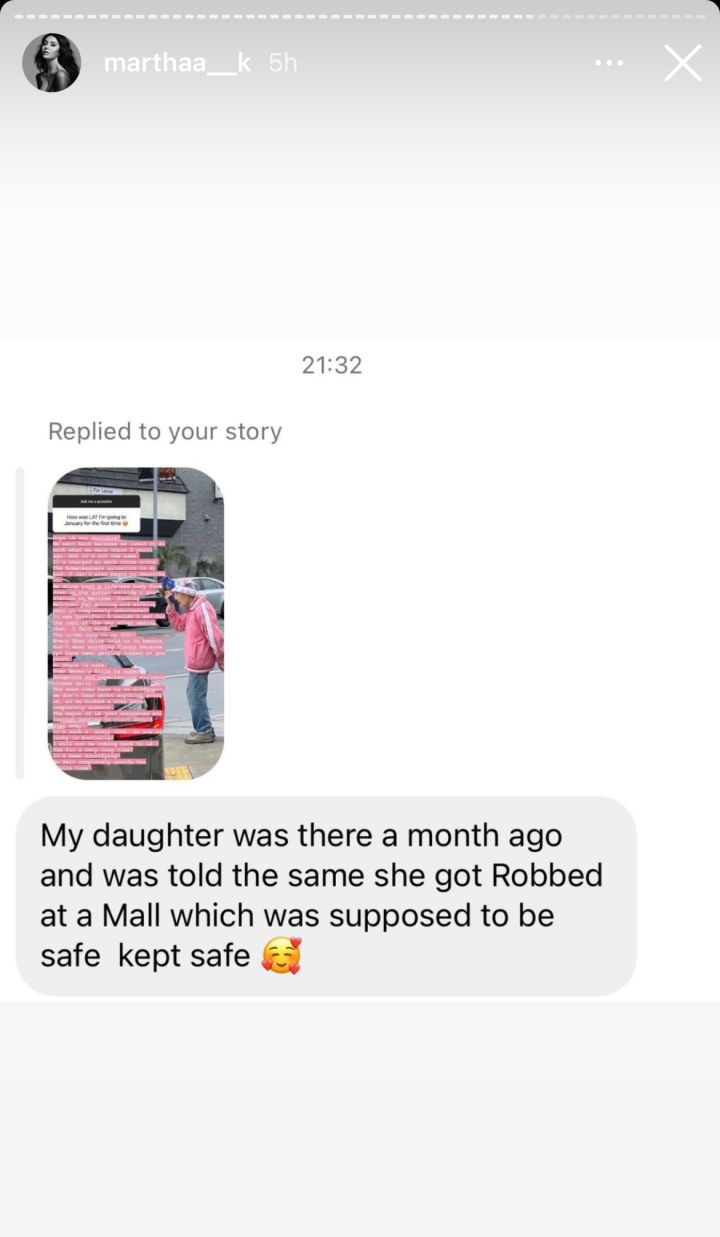 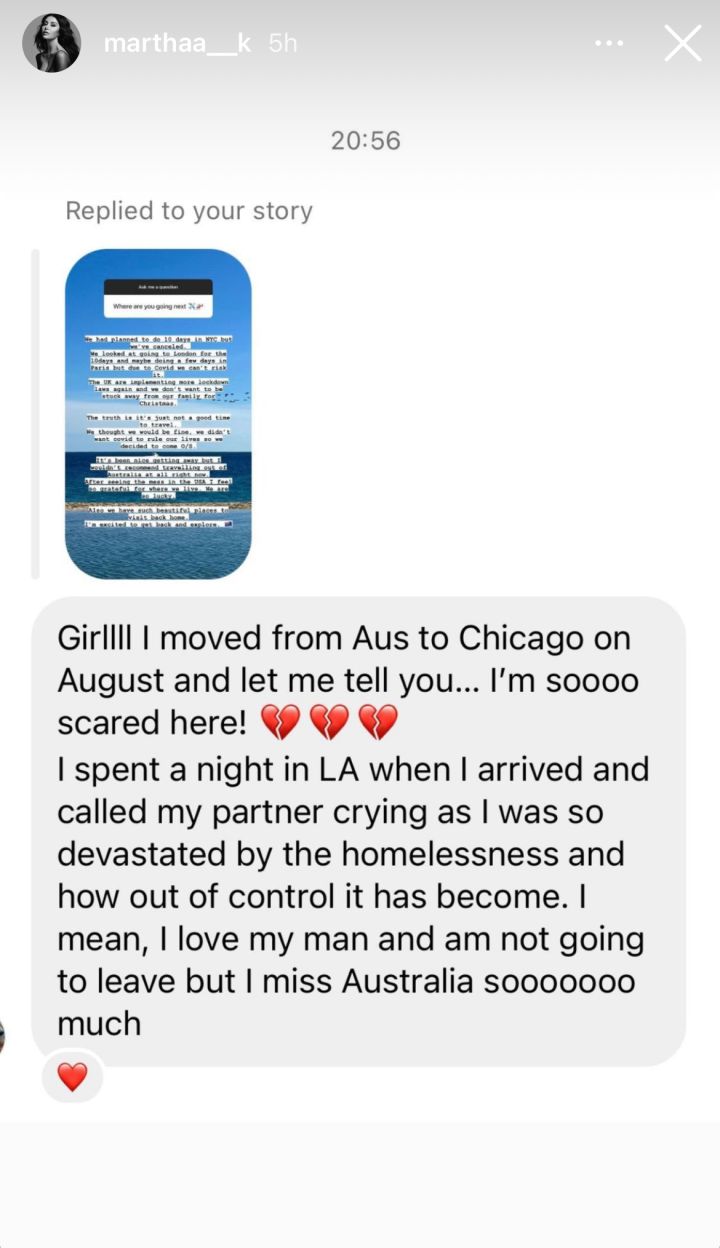 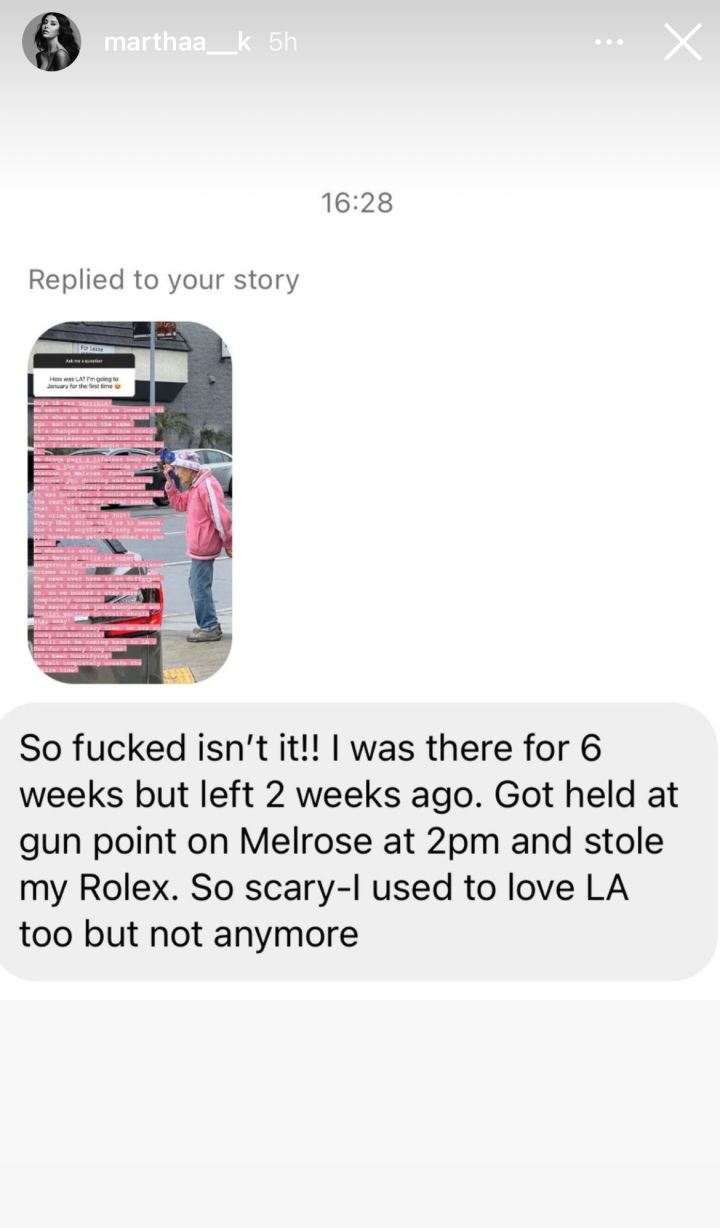 As Kalifatidis started to receive backlash from fans for calling out the lack of safety in the States, she wrote in a follow-up story:

“I’m not saying all of America is trash, only talking about my experience,” she wrote. “I went to the basketball and had fun, but that’s it tbh. The rest was a complete waste of time and money.” 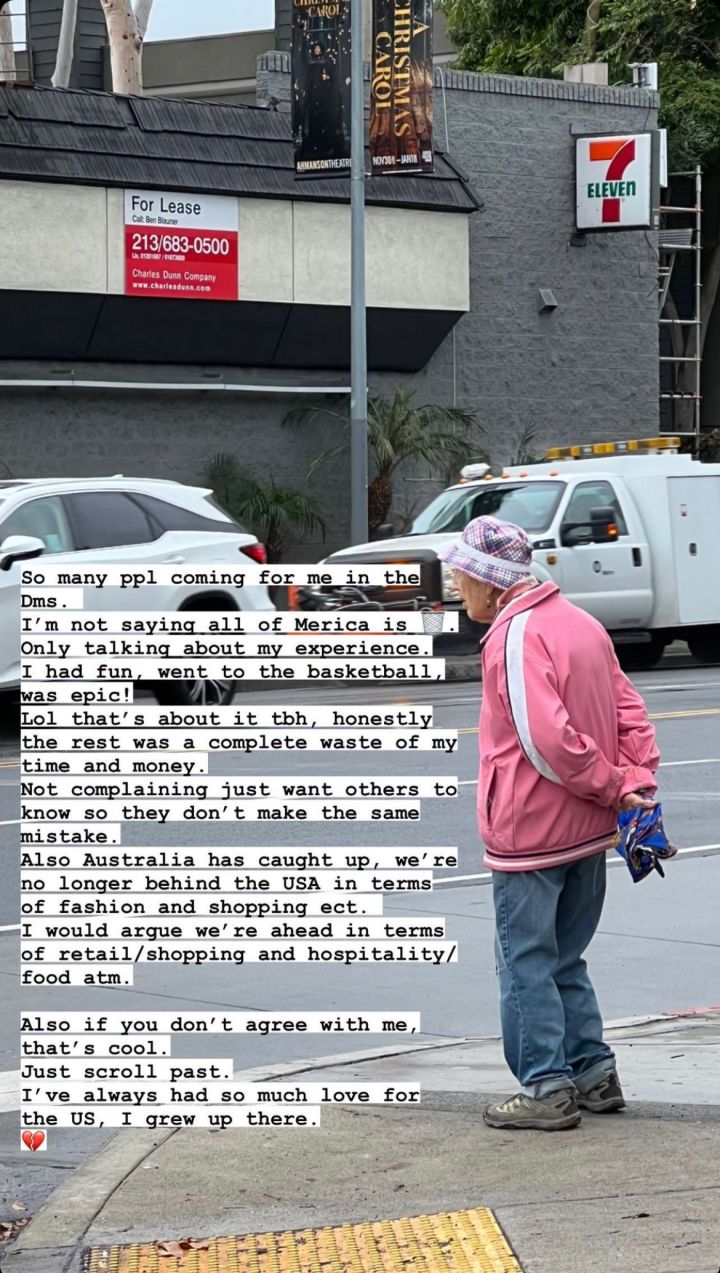 “Not complaining, just want others to know so they don’t make the same mistake,” Martha Kalifatidis continued.

“Also Australia has caught up, we’re no longer behind the USA in terms of fashion and shopping. I would argue we’re ahead in terms of retail / shopping and hospitality / food ATM.”

She concluded, “Also if you don’t agree with me, that’s cool. Just scroll past. I’ve always had so much love for the US, I grew up here.”