MAFS Kween Of Pot Stirring Selin Defends Herself For Poking The Hive, Says Justice For Dom

The MAFS kween of stirring the pot Selin claimed her attempts at bringing up old beef between the dolls at Girls’ Night were *checks notes* for Domenica’s sake.

ICYMI: the Married At First Sight brides reunited for a cheeky bevy and to spill the tea in Wednesday night’s episode.

Selin rocked up wearing an evil eye pendant (iconic wog behaviour). She then asked the group to explain what happened at the Couples’ Retreat AKA Olivia and Dom’s first major feud.

The other girls were having none of this. Olivia, Sam and Tamara ignored her and dragged her from directly across the table.

It was peak shit-stirring behaviour. And Selin was definitely acting like a little nosey Nelly over there. But I loved it personally.

If not for her nosiness, we wouldn’t have gotten this incredible shot of the Mean Girls trio talking shit about Selin as she’s munching on a wrap in the corner of the screen. 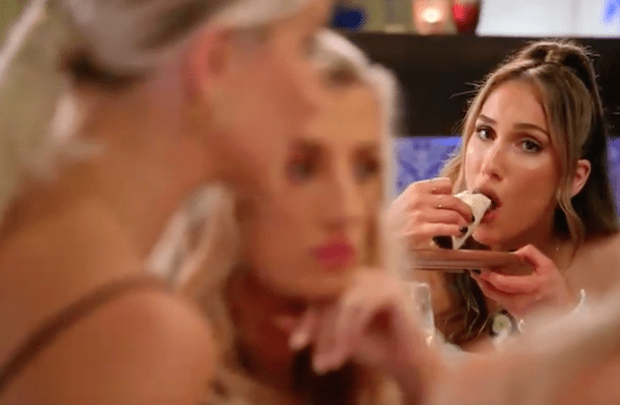 Selin denied claims she had maliciously messy intentions on the night. She told Today Extra’s David Campbell and Belinda Russell on Thursday morning that she brought up the Couples Retreat to call out the group’s behaviour towards Dom.

“I actually heard rumours of the girls ganging up on Domenica which didn’t really sit with me well,” she said.

“I wanted to go in and address that issue front on and I really didn’t get any answers. The girls didn’t want to talk about it.”

“Dom’s light was dimmed so low that she wasn’t herself,” Selin added

“She could’ve even really speak that night. I didn’t like seeing that.

“I didn’t like seeing everyone gang up on someone. That’s bullying and I just wasn’t there for it.”

Is it a bit rich for someone to say this when they allegedly called their on-screen husband a princess because he was emotionally mature? Maybe. But there’s also a difference between one person’s comments about a person and a whole group piling on someone.

Selin then explained to the Today Extra hosts why she was so invested in the Daniel and Carolina drama when she left before they arrived. Beyond just loving some reality TV drama.

“What they did and how they put Dion down and the way that they treated him in the process, it just wasn’t nice.

“[Carolina] actually came in with her head held high which is really funny to see… She came in very confident and just sat down like she’d done nothing wrong.

“At the end of the day, people wanted to know why she did it and why she couldn’t go about it another way.”

Married At First Sight airs on 7pm on Sunday and 7:30pm on Monday to Wednesday on Channel Nine and 9Now.