MAFS Recap: Jack Makes It Out Alive After Dom’s Dad Takes Him On A Tour Of The Family Dungeon

Bring on the parents, friends, roommates and any other third parties that will expose these people for who they really are.

Everyone’s still reeling from last night’s commitment ceremony where Danny Boi and Diva asked if they could get more airtime. I’m going to ignore the blatant product placement of KFC and Door Dash.

Bebe Al is still in recovery mode after wanting to stay in the experiment for his own personal growth and to work on his friendship with Sam – not an actual relationship. The 24 hours Resting John Face afforded them is almost up but Bebe Al has a plan! Kind of!

He tells her he was to do something “fun” together so that they can have a beautiful final memory. He’s telling her it’s just as friends even though it’s a master plan to make her love him. She agrees to stay one more week?

Princess Bogan and Nice Guy are preparing for a visit to her family farm. He asks Princess Bogan if he should wear R.M. Williams for the occasion to which the answer should always be yes. I actually fuck very hard with Nice Guy’s wardrobe. He knows how to button up his shirt and we love a minor achievement on this show.

Speaking of unbuttoned shirts, Jackson is ready to set sail on the sinking ship that is his relationship with Olivia.

Alright, I do love a weird, old family farm and Princess Bogan’s El Rancho Calarco is… that.

There are Teletubbies on the roof turbine and it’s very horror movie areas.

Princess Bogan’s Dad is now showing Nice Guy – who is a vegetarian, mind you – where he does murders. He is wearing Crocs so truly, we should have known. 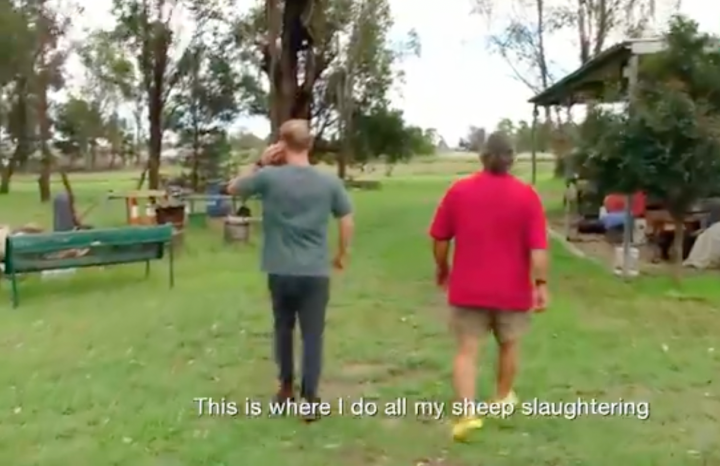 Jackson has taken the very real risk of inviting his wife to meet people he cares about.

GET A LOAD OF DAMO, EVERY BODY.

I’m assuming the other roommate is his missus. But if it wasn’t I’d be like a seagull on Finding Nemo.

Olivia tells Damo she is a “petty bitch, deadset”. We love self-awareness.

She then tells them the bridesmaid dress story as if it’s her proudest moment. The fact that this woman wants to go back to high school and teach is beyond me.

Back at Teletubbyland, Princess Bogan’s Dad is questioning Nice Guy over a spot of weights in the family’s gym-kitchen. Kitchen-gym. Room with sink and weights. Room that’s trying to find it’s purpose.

I REPEAT: IN BONDI.

Anyone who lives in Bondi and doesn’t have mould growing out of every corner of the room is fucking killing it.

Yes, she lives in a four-bedroom house but she also lives on the Gold Coast. If it was a competition she would still lose.

Speaking of beaches, Selina has suffered the unfortunate fate of staying at Cody’s Stank Pad in the Northern Beaches. Cody’s roommate who I will not service with a name has decorated the abode with rose petals.

The rose petals lead to Cody’s Batman sheets and the most fucked up “art” above the bed, which, surprisingly is a) not made out of pallets and b) not a king single.

Da Boiz confirm that the watermelon is her vagina. Um? That is not fucking on. Disgusting, PETULANT behaviour.

Baby Seal has been invited to stay at @badgalella‘s place, where she lives with her extremely cool and Melbourne ‘rents. He is scoping out how much naked-headstand space there is in the ensuite and that’s about as exciting as their Home Stay gets.

Nice Guy’s parents have arrived at the Teletubbies Farm. Nice Guy’s mum! I’ve missed her and her desire to share her stunning procreation skills. She’s wearing Gucky sneakers. To a farm.

Ballarat Paris and Brent are waking up after a lit night on the wines, before heading to Brent’s parents’ place for a hair of the dog. Brent’s dad asks them if they are siblings or dating.

Selina is waking up to the rustiest fan I’ve ever seen. This place reeks of dudes who moved out with the sole intention of somewhere to take their hook-ups back to. But mum still comes over to do the washing once a week.

Selina gives us a friendly reminder that Cody is 30 and she’s right, this soulless house is even sadder when you factor that shit in.

Olivia is trying to help Jackson make breakfast with an absurd amount of butter before they head to the gym. She asks him what she should wear, only to get pissed off that he is unhelpful in giving her clothing direction.

It’s the gym, Olivia. Figure it out.

She hates being there because it reminds her of being overweight and she’d rather be having a tea party with Princess Bogan.

Jackson tells Olivia that the gym is his world. She feels threatened by the gym because she believes she should be his world now. She’s not joking.

See you all tomorrow as we watch Olivia continue to ruin this relationship by just being her shiny self.

Chantelle Schmidt is a freelance writer. You can tell her how much you hate these MAFS recaps on IG here.