We’re back after a nice 24 hours away from people who make us grateful for even the shittiest relationships in our lives. Are we all ready for Diva and Daniel to be norti?

We’re less than a minute in and this behaviour is already being whipped out by Cody:

It isn’t the basic empathy Selina was after but it’s fine to see him trying.

Meanwhile, Matt is snoring and further pissing Kate off with his existence.

Mr Moneybags is still hopeful Diva will find a spark with him even though she’s busy developing a spark with something rhyming with schmaniel. She’s daydreaming about a life where she can go to the gym five times a week with her lover but is convinced she’ll see things out with Mr Moneybags first.

Jackson and Olivia have arrived at the theatre to meet the mums. Sandy and Mandy! I almost forgot about this magical mum rhyme that’s forcing Olivia and Jackson to be endgame.

Sam and Bebe Al are next. I hope Bebe Al’s mum is there because she was a savage at the wedding and I’ve missed her. Sam’s mum asks Bebe Al if he’s ready to get married, and he says yes, but Sam points out they don’t have much in common.

Bebe Al says he likes to tan and that this is pretty much his only interest. In five years Bebe Al sees himself being well-travelled and starting his own carpentry business. Sam’s mum asks Bebe Al if he can give Sam what she needs, and he says he’ll try to because he is an endangered species who needs to be protected at all costs, remember?

Bebe Al’s mum makes a point that women mature quicker and just wants him to have fun and see this as an adventure. I expected more savagery from Al’s mum but it’s wholesome to see her support him. Also, Bebe Al has another hot sister.

If I had a heart, Bebe Al would be breaking it down the middle right now. He doesn’t feel like he’s good enough for Sam after meeting her parents because he doesn’t have anything in common with their “beautiful daughter”.

Diva is heading to the gym to tempt herself til’ the sweat drip down Daniel’s balls. Daniel says he’s hired out a gym for her because that’s the kind of thing he does as a husband.

He is of course not her husband and he is coming on vvvv strong. He says Diva is “potentially an option” which is the least romantic thing I’ve ever heard someone say.

Daniel now has his leg propped up on one of those seat things that they appear to have at gyms, fully presenting the goods.

Diva tells Daniel she put him second in the ranking task and then they laugh about the fact that Mr Moneybags doesn’t see this coming because of it. Oooft, this is dirty behaviour which I’m 100% here for.

They tell each other they’re “spontaneous” as if they’re reading out their Tinder bios to one another. I’m just going to leave screenshots for the rest of this surface-level conversation because it does not warrant a paragraph. 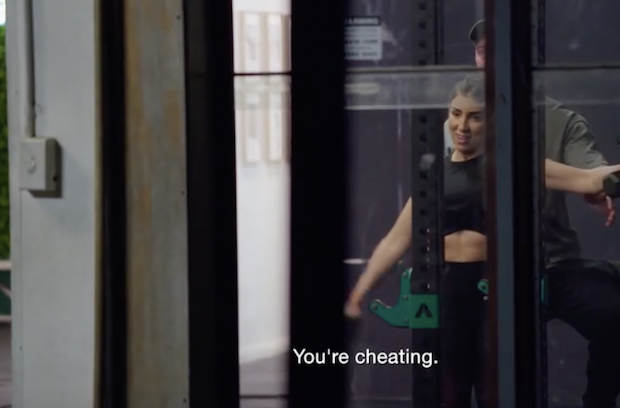 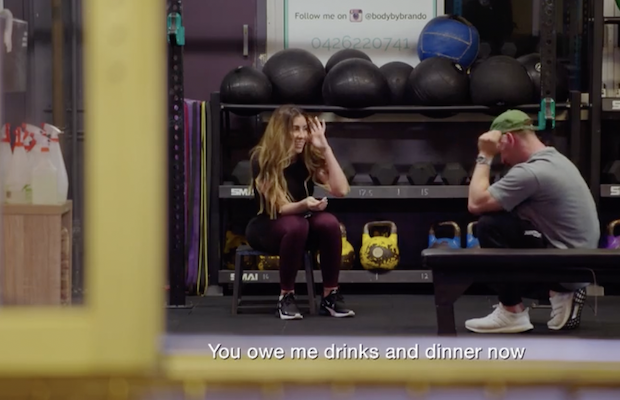 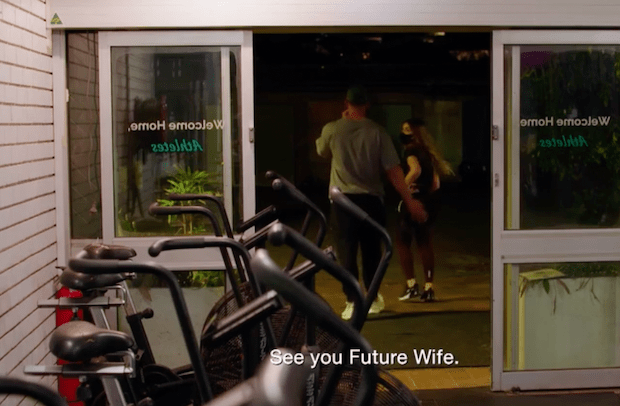 SWEAT DROP DOWN THESE BALLS.

I’m sure this is a legit dream some people have about PTs. I wouldn’t know as I waste hundreds of dollars a year on a gym membership I do not use.

Cody and Selina are now in the theatre. Cody’s mum and stepdad, and Selina’s bestie, are there. Selina tells everyone Cody isn’t comforting her. Cody says Selina focuses on the negatives and this doesn’t warrant hugs.

Cody’s stepdad says it’s difficult to hug people when you’re anxious but that Cody needs to make compromises. Cody shows emotion to tell the stepdad that he’s been a father figure to him. Selina is excited about how Cody is opening up after being a robot for so long.

Mr Moneybags is preparing a romantic cheeseboard for Diva while she’s off doing the norti thing with Daniel. This is fucked.

Deary me, he’s having flowers delivered by the same people who did their flowers at the wedding. He’s going all out which is fine as long as the sparkly Bal-marhn stays in the wardrobe.

My Moneybags reads Diva a letter. He is being very vulnerable about his parents’ separation and asks her to be open, honest and work together with him in this experiment.

She couldn’t care less and it’s atrocious to watch. “Yeah I really appreciate it,” she says to his face. Then she tells the camera she feels nothing and that she can’t connect with him on a deeper level.

She says Daniel has more in common with her because he likes the gym.

Matt and Kate have to do the ranking task. Matt finds it hard to rank the girls because Kate is number one to him and he feels so lucky and so forth and so on.

He feeds her with compliments and I would feel amazing for her if she didn’t despise the ground he walks on. Matt puts her first and calls her beautiful but Kate reacts how she always does – off it.

She says it’s nice but awkward. She doesn’t want to do the ranking because she’ll seem more like the devil than she already does.

Matt tells Kate that he knows the attraction is a barrier between them at the moment and that she can hurt his feelings if it means she’s being honest. Kate puts him third and he’s over the moon to get a bronze medal.

He then proceeds to tell her how attracted he is to her and that he wants to hold her hand and put arms around her waist.

He asks if she’s attracted to him, to which she says:

“Well I dunno you’ve sort of gone on about it so much now, I’m sort of like, well, hang on a minute, I don’t even know, maybe I should change the positioning.”

Now Matt’s stressed she’ll move him down the ranks and Kate’s stressed she’s given him false hope. She tells him she’s not feeling a “sexual desire” towards him “yet”.

Kate tells him that if the ranking is about who she would sleep with then she would move him down.

Now Matt likes her more and how is this possible?

Selina and Cody are bowling and Brent and Ballarat Paris are rollerskating. Olivia and Jackson are dry rooting on the grass.

Mr Moneybags thinks Diva is distant and always on her phone. She reckons she connects with Daniel on every level: the skin level, the height level, the teeth level and the gym level.

Meanwhile, Mr Moneybags has made her another thoughtful dinner, which is pasta. She decides this is a good time to tell him she doesn’t normally eat pasta.

Bebe Al and Sam are having a picnic. She is worried about his five-year plan as if he is a prospective employee or something. She tells him she needs more. He asks what this means. She says she doesn’t know.

She wants a lifelong fire in her belly.

She says “not right now”.

Baby Seal has worn his festival shirt to discuss how he’s feeling about @badgalella with Cody. He says when they’re alone it’s fine.

Cody makes it clear to the cameras that Mitch not wanting other people’s opinions “defeats the purpose of this experiment.”

Baby Seal says that if gets interrogated too much he’ll “walk out of the experiment”. I love his threats. So very cute of him to think anyone would care aside from @badgalella.

Meanwhile, @badgalella is with Ballarat Paris and Princess Bogan. She’s basically asking them to not upset Mitch at the dinner party which is the saddest thing I ever did witness.

“He’s very nervous about the dinner party because he feels like everyone’s going to attack him,” she tells the girls.

“How does that feel for you?” Ballarat Paris asks.

Jesus, Mary and Joseph. Baby Seal’s reactions to basically anything are extremely alarming.

“Good vibes at the dinner party!” @badgalella demands on her way out.

“Good vibes only? What do you think that means?” Princess Bogan asks Ballarat Paris after @badgalella leaves her students for the teacher’s lounge.

Princess Bogan says Baby Seal is being selfish. She’s hoping someone will say something about him threatening to leave the experiment.

Hell on earth. This is not ending well for anyone except the viewers at home. And perhaps @badgalella in roughly three months when she can see the light.

Diva has been texting Daniel in between using the Mermade hair waver incorrectly.

Mr Moneybags says he’s trying to be better for her and she ain’t giving him shit. He says all she cares about is her phone.

Diva tells Mr Moneybags his letter was “so surface” which is the meanest thing I’ve ever heard come out of her mouth. And homegirl has said some shit. She said she’s been giving this a chance despite her not walking down the aisle to her dream man.

I’m actually shook that a 34-year-old thinks these are important things to connect on in a relationship.

She then calls him delusional before demanding he shuts up so she can berate him some more.

Mr Moneybags bounces – but not before he slips on his Gucci loafers.

He tells her he has a heart – insinuating that Diva, in fact, does not have said heart– and I love it.

“She’s sucked the life out of me,” Mr Moneybags tells the camera as he bounces as far away from Diva as he can.

There is no visuals of this convo so it is now clear to me that MAFS producers have phone-tapping privileges.

Daniel asks Diva if she could fall in love with Mr Moneybags, but tells her she has to answer it quickly.

He proposes another catch up. She’s into it.

Tomorrow night is our next dinner party. Will Diva reveal her gym escapades with the class? Will Baby Seal have a baby tanty? Will he set @badgalella free from a life of repressing her feelings to appease him?

I’m crossing every body part for the good shit.

Chantelle Schmidt is a freelance writer. You can tell her how much you hate these MAFS recaps on IG here.