I dunno what the scenario is with the MAFS contestants’ Instagrams.

We know the producers have taken over, but do they approve the pics and captions and get the stars to hit post themselves, or do the producers take care of everything?

Well whoever’s running Daniel Holmes‘ ‘gram made quite the blunder and it did not go unnoticed.

As spotted by the So Dramatic! podcast, the controversial contestant shared a snap in which he can be seen smooching his new lover, Carolina Santos.

The caption reads: “Tip toeing to kiss my man.” 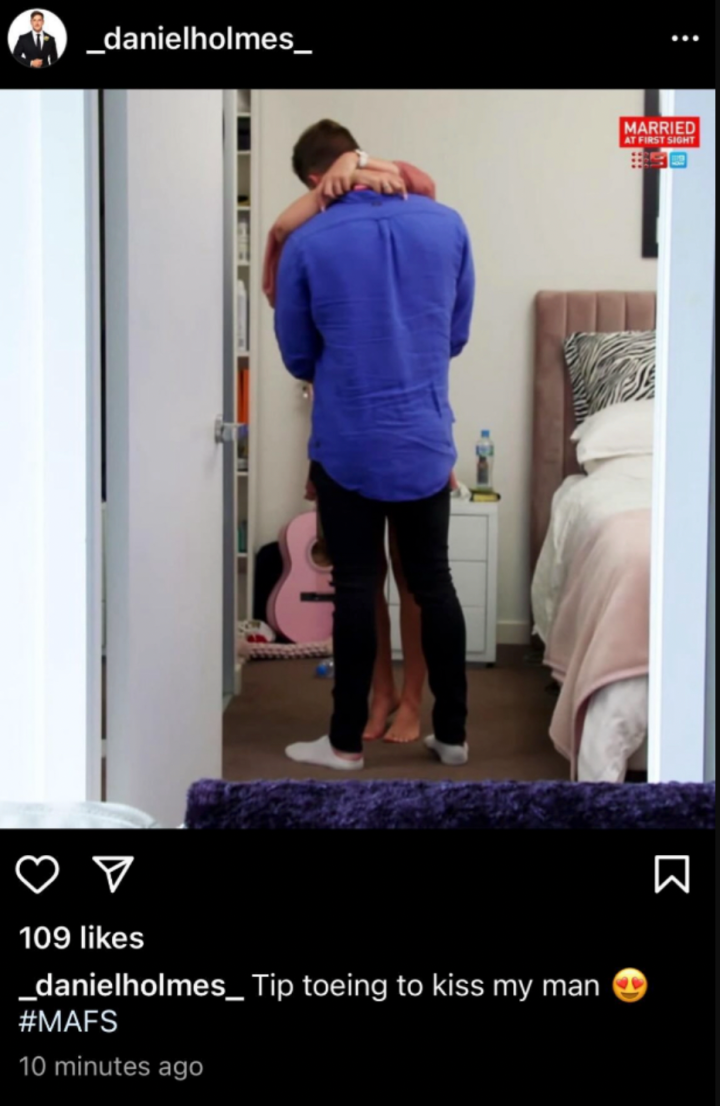 That caption was obviously meant to go to Carolina, who later shared the same pic with the corrected caption.

Meanwhile Daniel edited his caption to read: “The only thing that matters to me,” which sounds like an obvious dig at his now-ex bride.

It comes after a sneaky MAFS source told Daily Mail Australia that the cast “won’t be getting their socials back until at least May after the show has finished airing in the UK.”

The source claimed there’s “a lot of pressure” to stop the sneaky stars from going “rogue” while the show airs in New Zealand and the UK (which is ironic given the rogue activity that’s gone on here).

Apparently the brides and grooms are pissed about this, with one anonymous bride telling the site everyone’s “worried” they’ll be “old news” by the time they regain access to their Instas.

“We have no choice but to wait,” she huffed.

“We are trapped. Some people have quit their jobs and are hoping MAFS is going to be their big break to never have to work again.”

The unnamed contestant went on to slam her co-stars, claiming “some girls have been buying fake followers to come out on top.

“It’s so obvious who it is. They’ve jumped 28,000 followers overnight two nights in a row, while everyone else is getting a few thousand.”

She concluded, “We’ve really got two or three months to get big before the new cast come along and we’re forgotten about.”

Cry me a river, sis.

MAFS continues on Sunday night at 7:30pm on Nine.

Sydney WorldPride
There are no more articles to be viewed