My favourite thing ever is when normal folk expose rude celebrities because, frankly, if a celebrity is gonna be a dick, they deserve to be called the fuck out.

A staffer who worked at a Los Angeles restaurant has opened up to Deuxmoi about the nice and not so nice celebs they’ve served over the years.

They say it’s a “very well known” restaurant with loads of celebrity “run-ins and experiences,” so buckle up and let’s dive into them, shall we?

“Kendall Jenner came in with a group of friends, very loud and they are kind of intimidating, but overall 5/10 is what I would rate my experience serving her but she was nice enough,” they began. 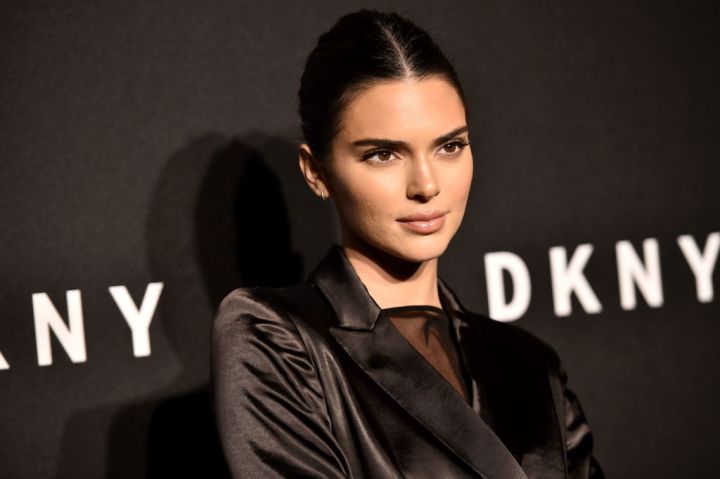 They said Pete Davidson “is probably the funniest celeb I’ve ever met, he loved to crack jokes while I was serving his table and was a really fun guy and he definitely made my night. He shouted ‘drinks on me’, offering everyone in the room a drink. He was pretty drunk that night, even though he claimed he wasn’t, but I could tell he was. 10/10.” 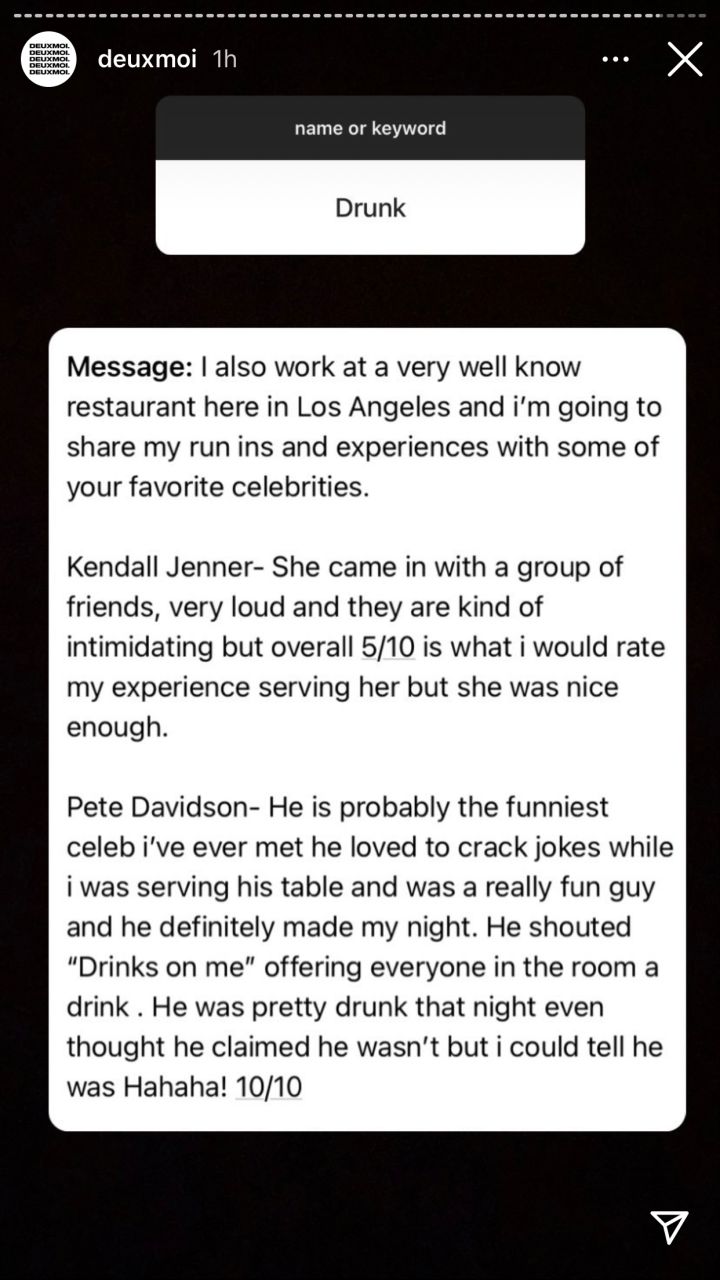 “Her Australian accent makes her 10x more attractive,” the staffer wrote. “She is very easy to talk to and is one of the most down to earth celebrities I’ve met.

“I remember when I was getting ready to pick up her and her friends’ plates, she helped me by picking up all the trash around everyone’s plates and stacked them so I wouldn’t have to do as much work. Which was pretty sweet of her, so 10/10!” 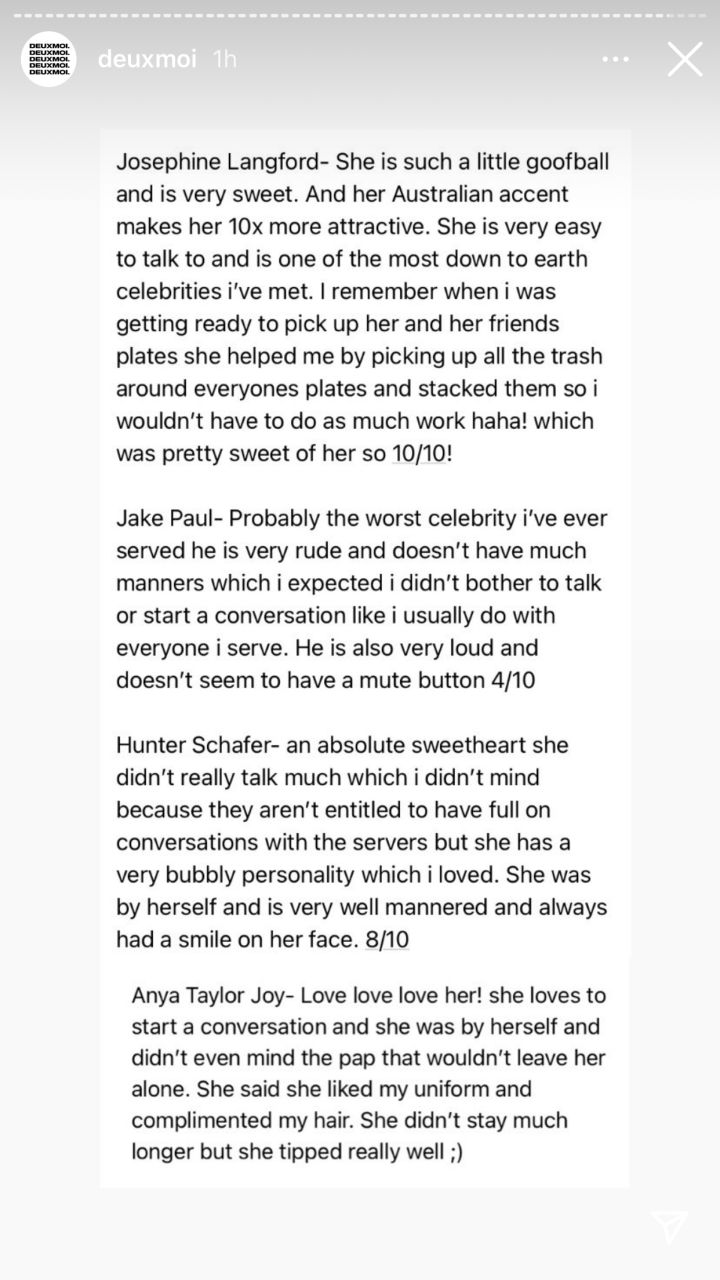 Euphoria star Hunter Schafer was “an absolute sweetheart! She didn’t really talk much, which I didn’t mind because they arne’t entitled to have full-on conversations with the servers, but she has a very bubbly personality, which I loved.”

In news that will surprise absolutely no one, Jake Paul was “the worst celebrity I’ve ever served, he was very rude and doesn’t have much manners, which I expected. I didn’t bother to talk or start a conversation like I usually do with everyone I serve. He is also very loud and doesn’t seem to have a mute button. 4/10.” 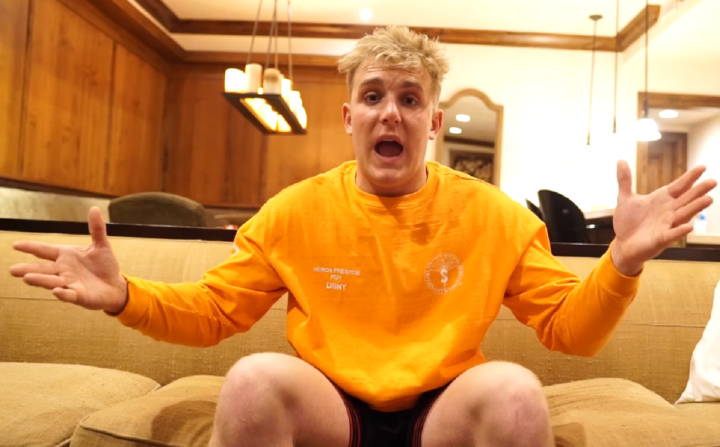 And as for angel Anya Taylor Joy, “love love love her! She loves to start a conversation and she was by herself and didn’t even mind the pap that wouldn’t leave her alone. She said she liked my uniform and complimented my hair. She didn’t stay much longer, but she tipped really well.”

Love this kind of shit? SAME, bestie! Head here to read a similar yarn that I wrote over the Easter break.