A Case For The FBI: Did Kim Kardashian Make Kris Jenner Delete *That* Seemingly Unedited Photo?

Ya know, for a family who literally makes a living off social media, the Kardashians sure do fuck up on there quite a bit, don’t they? The latest culprit being momager Kris Jenner and honestly queen, I thought you were better than this!

So what happened was, Kris Jenner posted then swiftly deleted a seemingly unedited photo of herself alongside daughter Kim Kardashian and grandbaby Chicago West because GOD FORBID they share a photo where they actually appear as they do IRL.

The pic was snapped over the weekend at Chicago’s fourth bday. The caption read:

“Happy birthday to my beautiful granddaughter Chicago!!!! You have the sweetest spirit and always have the cutest little smile on your face with the softest little voice and your precious laughter lights up wherever you are!

“You are such an amazing sister, daughter, granddaughter, cousin and niece and I can’t believe you are now four years old! You bring us so much joy and happiness every single day. I love you so much Chi Chi!!!!! Have the most magical day!!”

Here’s the snap that was subsequently yeeted off the internet faster than you can say “The devil works hard but Kris Jenner works harder”: 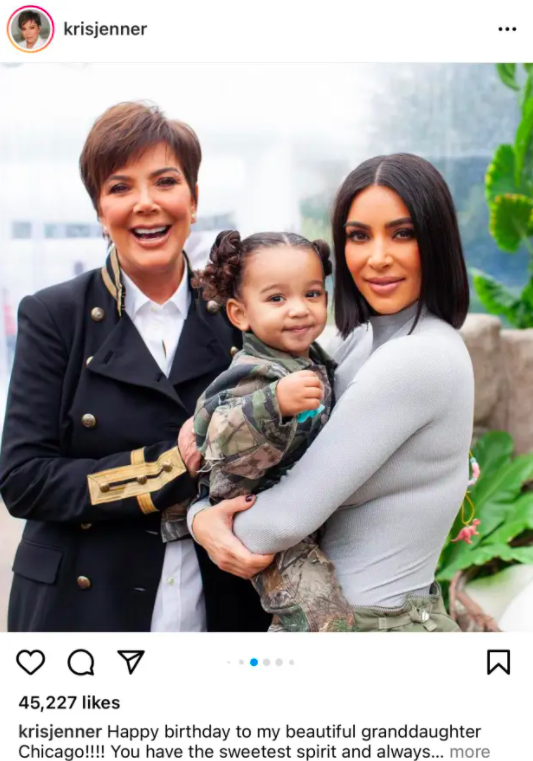 Um, all three of them look stunning. STUNNING.

They’re not even my family, and I wanna get it framed and hung on my wall.

Neither Kris nor Kim have commented on the sitch so to be honest, we have no bloody idea why it was shitcanned. But the internet has speculated that it may be because the photo appeared to be unedited and as we know, the fam seldom uploads a pic without FaceTuning it to the point that they’re unrecognisable and sometimes don’t even look human.

Before it was deleted, there was a Reddit thread discussing the pic and one fan wrote: “I’m surprised KJ got away with posting this (seemingly) unfiltered pic. They both still look great tho!”

“Sheesh you can really tell a difference. They still look great though!” another fan added.

Meanwhile a third fan wrote: “I think it’s def still filtered, just not AS filtered as we usually see. I think Kim doesn’t really like her kids to be filtered but I def could be wrong.”

Shortly after, folks in the Reddit thread noticed that the pic had been scrapped.

“Omg she took this down! It’s not posted anymore!” the fan wrote.

Uh, maybe they took it down because nasty-ass fans were commenting on how surprised they were that the pic went up in the first place?

I wouldn’t put it past Kris and Kim to trawl Reddit threads, TBH.

This is why we can’t have nice things, people. Ya can’t leave well enough alone, can ya?