The Tonight Show starring Jimmy Fallon is under fire for seemingly editing the fuck out of Kim Kardashian‘s face during her appearance. I’d personally like to know what filters they’re using because I too would like to look like an unblemished cherub every time I wake up.

Instagram account @problematicfame, which is known for pointing out celebrity photoshop fails, posted the pics of Kim K on The Tonight Show onto their Instagram story.

In the pics, you can see whatever filter the folks on The Tonight Show used changing the very shape on Kim K’s face. Thing is, they mustn’t have applied the smooth layer of beauty in every scene, because there are some moments where Kim’s face looks perfectly normal. Then there are others where she looks perfect and shiny like that one facetuned pig.

Have a gander at the pics below. You can definitely see some changes to Kim K’s nose and other parts of her face.

My question is why did they do this in the first place? And why did they miss some scenes when applying the filter onto her face?

I may be smart, sexy and intelligent, but some things in the world of celebrities escape me. 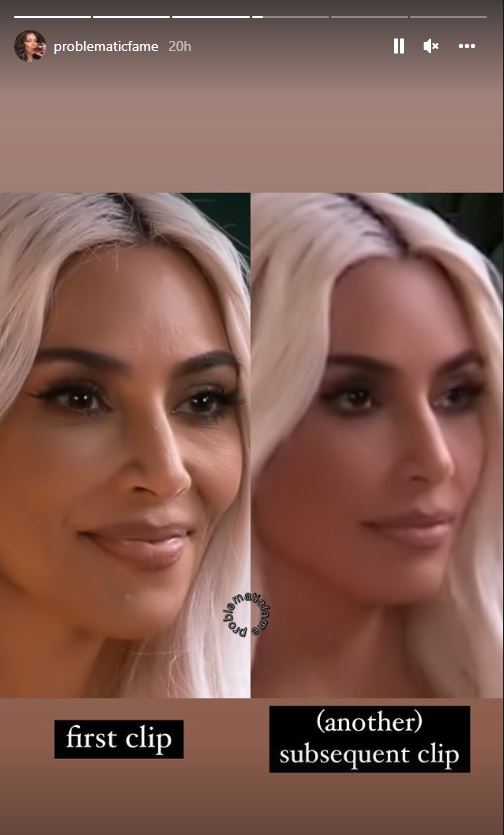 Kim K, who is absolutely 100 per cent not in Australia (although we really wish she were) was on the show to promote her skincare line Skkn by Kim.

During her interview with Jimmy Fallon she spoke about how she never really watched SNL until she had to be on it. Thus, she didn’t really know that Jimmy was once on the show.

Similarly, she revealed that she had no idea that Will Ferrell is an ex-SNL star as well.

“Even a month after, I was at dinner, and Will Ferrell was sitting right next to me — the show had just aired, when I was on — and he had mentioned he had seen it,” she said.

“And I literally had to text Pete and be like, ‘Wait, was Will Ferrell on SNL?’ And I was so embarrassed.”

You can watch Kim’s full appearance right here, smooth filter and all.