Just gonna say it: I’m in a toxic relationship with the Kardashians. Have been for years. And even though I’m well aware that the majority of the shit they put out is fake, I still keep coming back for more. But after their most recent of many scandals AKA the breakup of Kim Kardashian and Pete Davidson, I must admit, I’m feeling the love that I have for them slip away a little.

Following the news that the couple had split after nine months together, a bunch of insiders have claimed that the relationship was basically a big ol’ PR stunt for their reality show The Kardashians.

Yep, that sweet but unexpected relationship that we’ve been fawning over for the last nine months was apparently just a storyline cooked up in the Kardashian laboratory.

It certainly wouldn’t be the first time (never forget the rumours that Kris Humphries auditioned to be Kim K’s husband), but still, I feel like such a fool for watching on with love heart-shaped eyes. 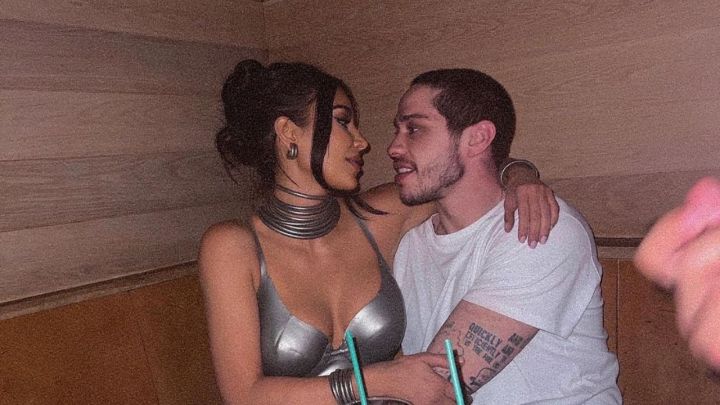 How do we know this? As usual, insiders close to the sitch have spilled the tea to Deuxmoi. Which means we should most definitely take it with a grain of salt, but still, there’s an awful lot of evidence.

Shortly after the breakup news went live, someone claiming to be related to an employee at Hulu, the network that houses The Kardashians, told Deuxmoi that Kim’s trip to Australia was purely for the show.

According to the insider, production didn’t get enough content for the show when Kim visited Pete in June, so Kim took another trip to see him.

Apparently the two had hardly spoken “in weeks” and Pete was “annoyed” by Kim’s attempts to flirt in Queensland. Yikes.

And now the latest spot of tea is that Pete actually ended it with Kim because he was sick of the fakeness that came with dating her.

“The word is that Pete did the dumping and he’s actually been trying to end it for a little while now,” the source said.

“He never thought it would be a super long-term ultra serious thing and was getting irritated with Kris [Jenner’s] spin making it seem like they were soul mates.

“He tried ending it a few weeks ago, then Kris sent Kim down to Australia to keep up appearances for the sake of the show which he really didn’t like and felt was so forced and contrived.”

They added that “the final straw was his appearance in the Season 2 trailer [of The Kardashians] which he didn’t expect to get used again and again and he was irritated that it makes their romance seem like the centrepiece of Season 2 when in fact he’s barely on camera because he refused to be on camera.”

This also reminds me of the fact that the Kardashians had us bawling our eyes out when they announced they were ending their series only to then move to another network and create an identical show.

They really fooled us into believing that they were leaving our screens for good. I should send Kris Jenner my therapy bills for playing with my emotions like that.

It’s as if they have no respect for their audience and just think we’ll eat up any pile of bullshit they feed us. Because, unfortunately, that’s what we’ve been doing for years. But now that I’m more aware of how contrived their entire public persona is, I’m starting to resent them quite a bit.

Since the time The Kardashians started, basically the only shit going on in their lives has been controversial. From Astroworld to allegations that they’ve been faking their billionaire status.

They purposely withheld the controversies from filming, which I find really shitty because A) it means the show isn’t an accurate depiction of their lives. And B) their reality show would be the perfect platform to actually apologise and show some accountability.

But nup. They’ve pulled the wool over our eyes once again. They even got busted faking a storyline to pretend Astroworld never happened which I find reprehensible.

And because they were low on content for the show, Kris Jenner allegedly decided to cook up this fake Kim and Pete love story which seems to have been BS from the get-go.

Even Pete, who arguably had something to gain from the relationship, got to the point where he was like “Fuck this, I’m out.”

I’m not saying that I’m going to stop following them on socials, watching their show or even writing about them.

Because there’s no denying that they’re an important part of the current pop culture zeitgeist.

But I certainly won’t be allowing myself to become fully invested in the narratives they spin because let’s face it, a lot of the times they’re just that: fictional narratives.