Yikes: Apparently Pete Davidson Proposed To Kim Just Before They Torched Their Relationship

If you’ve got a pulse and an internet connection, you’ve without a doubt heard that royal couple Pete Davidson and Kim Kardashian have reportedly split up. Let’s all cross that breakup off our 2022 bingo cards and dive into the rumours around it, shall we?

According to Radar, Pete got down on one knee and proposed to Kim right before they broke up. Ouch.

“Everything was just moving too fast,” a ~source~ said. Keep your grain of salt ready, folks.

“Kim wanted to slow things down and instead Pete proposed,” the source continued.

“He is devastated. Everyone warned him that he was going to push her away, but he didn’t listen. Remember, this is the same guy that proposed to Ariana Grande after just a few weeks. Pete learned nothing from that relationship. He falls hard and he falls fast.”

“Hard and fast” is an understatement. Pete also has several tattoo tributes to not only Kim but her children, too. And also to all his other girlfriends because the man has no chill. The whole thing is wild, messy, and probably a case of love-bombing. Pete go to therapy and confront your toxic relationship patterns challenge.

Other sources denied Pete proposed but until he or Kim actually put out a statement, we won’t know for sure.

Another “source” told E! News the couple broke up because of the pressures of doing long-distance plus their hectic schedules. Of course, Pete’s currently in Queensland filming Wizard! Maybe Kim just absolutely fucking hated the Daintree or something.

The internet, however, is still abuzz with its own theories and rumours about the split. Gossip guru Deuxmoi posted a bunch of anonymous submissions about the breakup.

I am absolutely going full Benedict Cumberbatch in Sherlock, blowing the cobwebs off my magnifying glass and fetching out a wanky little hat.

One of the spiciest rumours was a story first submitted to Deuxmoi before news of the breakup circulated.

The poster claimed that their gossip was coming from a family member who works for Hulu.

According to the tea, production didn’t get enough content for the show when Kim visited Pete in June, so Kim took another trip to see him. Carbon emissions, yay!

Apparently, the two had hardly spoken “in weeks” and Pete was “annoyed” by Kim’s attempts to flirt in Queensland. Poor Kim! But also this does not track with the heart-broken proposal claim so it’s all looking very suss.

I mean, obviously this is all speculation but I will be watching the next season of The Kardashians with eyes bloody peeled.

Of course Deuxmoi didn’t stop there — they posted a text dated Wednesday which also alleged tension between the two.

According to the texts, Kim and Pete were “on the rocks / over”.

I’m absolutely going to need a John Watson on hand to figure this one out.

But the timeline of these various breakup rumours is a lil off ‘cos Deuxmoi also posted a text from way back in July which claimed Kim and Pete had broken up in Cairns.

To be fair, it’s not like Cairns is known as the city of love. Just the city of really cool coral.

The So Dramatic! podcast also pointed out how quickly the breakup news seems to have dropped. On August 5, articles were being posted about Kim and Pete making long distance work — but on August 6, the breakup story started circulating. 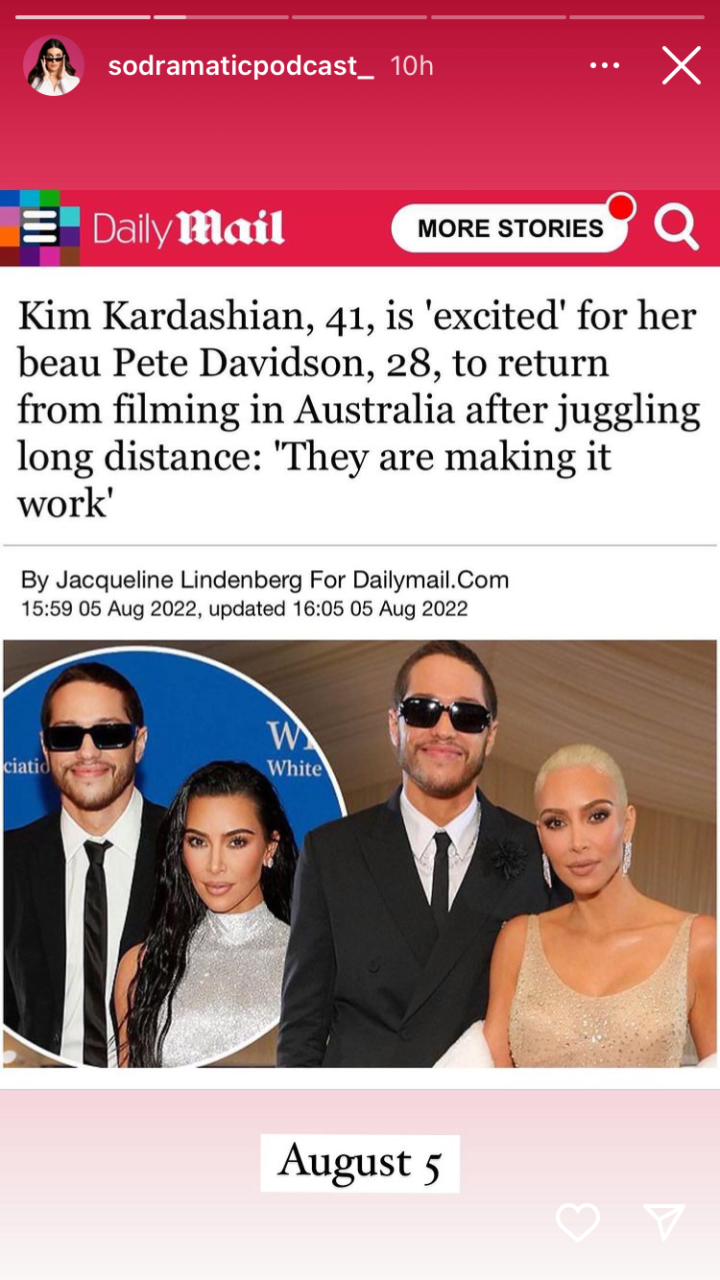 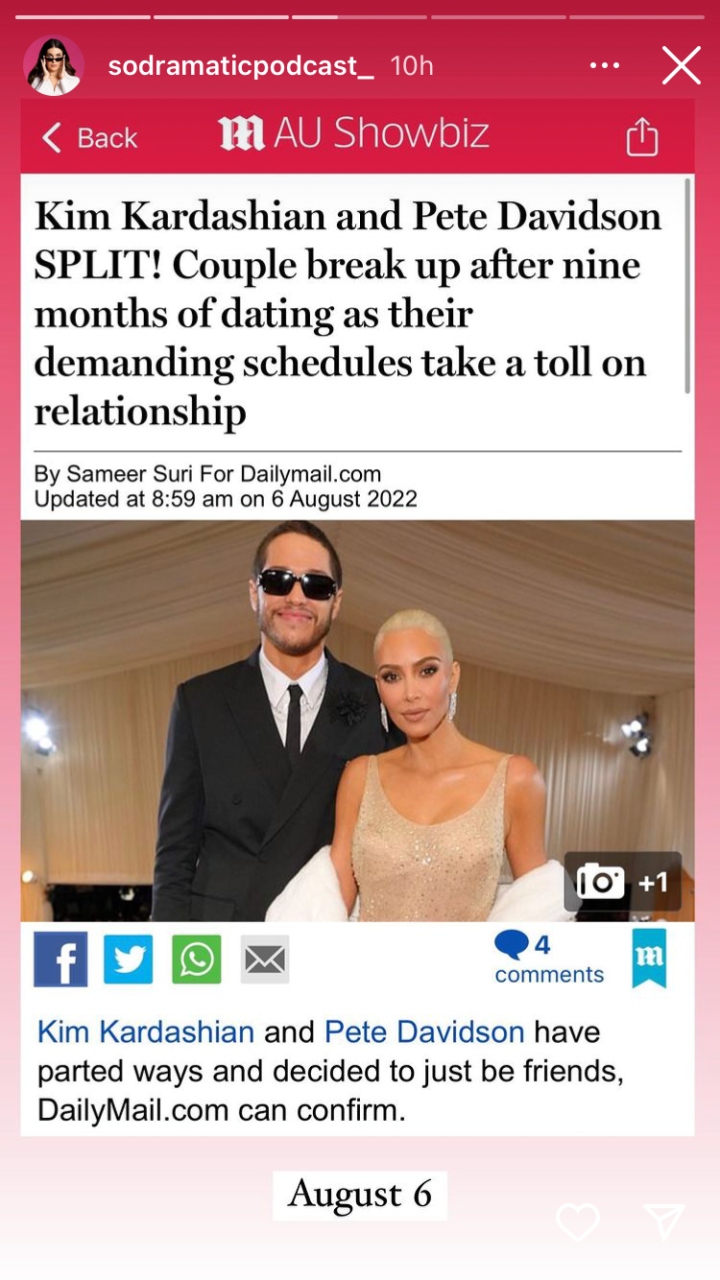 I’m bamboozled, baffled and bemused. What does it all mean? At the end of the day, only Kris Jenner really knows.

A different theory came from Page Six, who reported on August 5 that an “insider” said the couple’s age gap was a big reason behind the breakup.

I mean, I feel like being based on the other side of the world to your partner is probably much more likely but hey ho.

The source said that while Pete’s “spontaneous and impulsive”, Kim wants to focus on her four kiddos. Fair enough.

Neither Kim Kardashian or Pete Davidson have publicly posted about the breakup yet, but I sense we’re in for a juicy season or two of The Kardashians.