After nine months of dating and making Kanye West seethe with envy, Kim Kardashian and Pete Davidson are officially donezo.

The news was quite a shock to fans when it landed over the weekend (I almost spat out my margarita!). But according to Deuxmoi, we shoulda known that something was going on based on Kim’s recent Instagram activity.

The goss guru shared several posts recently dropped by Kim K which kinda alluded to the fact that something big had happened.

“These are some of Kim’s emo posts I was referring to… was she trying to tell us?” Deux wrote via IG Stories.

The two posts are inspirational quotes that are very, well, I guess “emo” is the perfect word for it. Rawr XD.

The other is a quote by Winnie the Pooh (???) that reads: “If there ever comes a day when we can’t be together, keep me in your heart. I’ll stay there forever.” 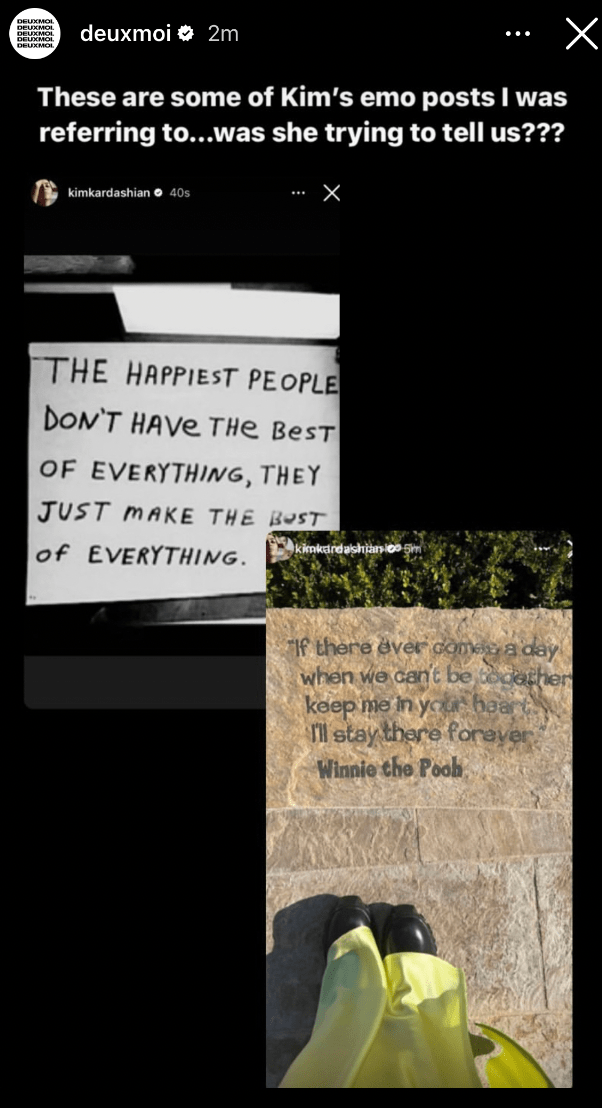 Shortly before the breakup news went live, Kim posted a series of photos with hers and Kanye’s daughter North West wearing the new Yeezy collection.

Considering the beef that Kanye and Pete have had publicly, this surely woulda been a slap in the face to her now-ex BF!

Also, it was low-key suss that Kim flew all the way to Australia to visit Pete the other week and not a single photo was posted from her trip.

Kim Kardashian posts literally everything on Instagram, especially her vacays. ESPECIALLY when it’s a location as gorgeous as Australia, if we do say so ourselves.

Clearly the trip wasn’t a pleasant one and she therefore didn’t want any of it on social media!

According to E! News, Kim and Pete reportedly called it quits because of the long-distance and hectic schedules that “made it really difficult to maintain a relationship”.

Apparently they still have “a lot of love and respect for each other” which is truly what everyone says about each other, more or less, after a breakup.

Pete has been in Queensland working on the upcoming comedy film Wizards!, Kim visited just last month (or did she?), and Pete is expected to wrap up the Down Under gig in August.

Oh and in case you were wondering, another “source” claims that this alleged breakup has nothing to do with Kanye West. “The divorce is moving ahead with Kanye,” they told E! News. “They are happily co-parenting.”

Shortly after word got out of their split, a bunch of folks shared spicy details to Deuxmoi about the demise of their relationship.

One of the wildest rumours was a story submitted by someone claiming to be related to an employee at Hulu, the network that houses The Kardashians.

According to the tea, production didn’t get enough content for the show when Kim visited Pete in June, so Kim took another trip to see him.

Apparently, the two had hardly spoken “in weeks” and Pete was “annoyed” by Kim’s attempts to flirt in Queensland. Yikes.

There’s a heap of other tea plus some spicy theories so I recommend you suss it out at your earliest convenience.