Kim Kardashian West is coming in hot on the ‘gram right now.

Over the past couple of hours, Kimmy has been drip-feeding thirsty fans a titillating selection of polaroid snaps. In them, she’s sporting some fur over a range of all-white outfits and varying degrees of nudeyness.

we could make a befitting Mean Girls nipple quote reference here, but we won’t

She’s also sporting cornrows and captioned one of the pics “Bo West” (referring to model and actress Bo Derek who famously wore the same ‘do in the 1979 flick ’10’), much to the ire of the interwebs.

Folks have started calling KKW out for cultural appropriation, irritated that she’s referring to a hairstyle that’s been worn by people of colour for centuries as “Bo Derek Braids”.

@KimKardashian Just saw your snap. Not Bo Derek braids. Cornrows! Call them what they really are. Just because Bo Derek wore her hair like that in the movie 10 she did not create that hairstyle. ???? pic.twitter.com/ajpL73aj83

Seasoned jimmy rustler, Perez Hilton, took a screenshot of the snap, uploaded it to his Instagram and asked his followers if they think it’s “offensive”:

Kim Kardashian is getting called out online for referring to her new hairstyle as "Bo Derek braids," with people explaining how the braids actually originated in Africa thousands of years ago and shouldn't be attributed to a white actress. What do U think? Is this offensive? Get the full story and reactions at PerezHilton.com/KimKardashian or swipe up on this in our Instagram Stories & Highlights.

In a delectably salty turn of events, none other than Lindsay Lohan commented on the post, simply stating “I am confused.”: 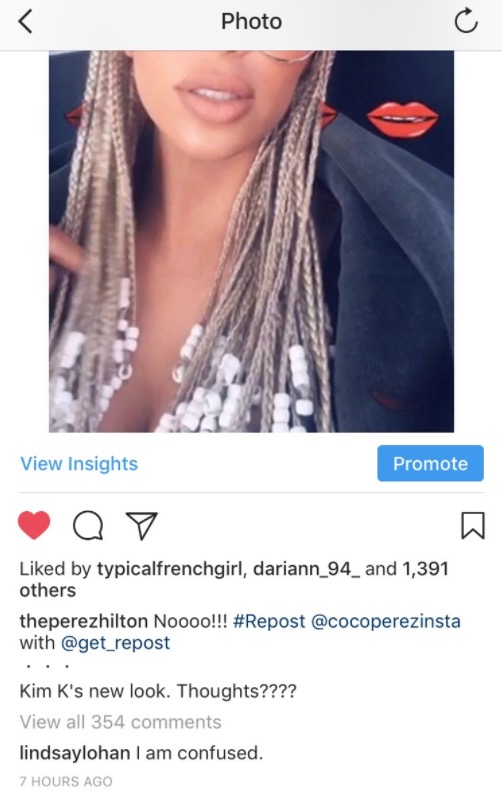 Thankfully, the year is 2018 and the Internet allows Burn Book victims the courtesy of an instantaneous clap back (resulting endless petty entertainment for us on the sidelines).

Not one to take it lying down in a white g-banger, Kardashian took the opportunity to quiz Lohan on the curious British accent she’s adopted in recent years: 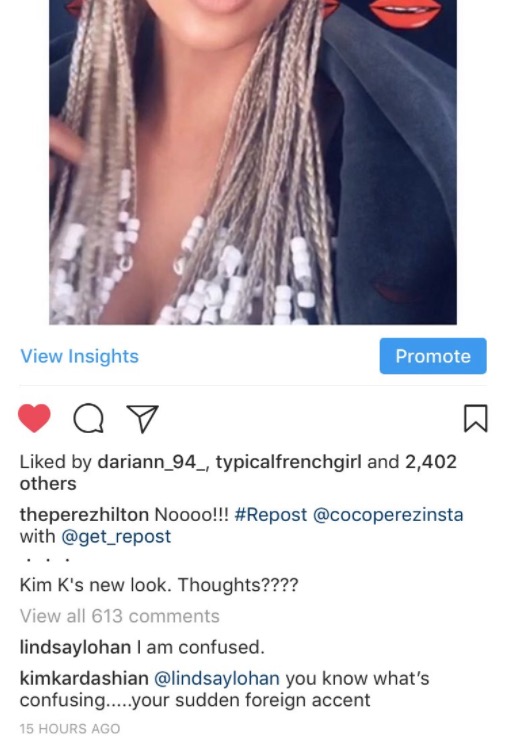 The salt. It burns.

Would somebody please get Tina Fey on the line?! We’re feeling a sequel.