The sitch between Kanye West (AKA: Ye) and Kim Kardashian is fast becoming genuinely worrying after the rapper accused his estranged wife of “kidnapping” the couple’s children and alleged that his eight-year-old daughter North is on TikTok against her father’s will.

The seemingly endless back and forth between Kim and Ye was reignited again in the early hours of this morning after an Instagram post by Kanye. In it, the rapper asked what he should do about his eight-year-old daughter North allegedly being on TikTok against his will.

Kanye’s caption read: “SINCE THIS IS MY FIRST DIVORCE I NEED TO KNOW WHAT I SHOULD DO ABOUT MY DAUGHTER BEING PUT ON TIK TOK AGAINST MY WILL ?”

Kim responded an hour later by posting a statement of her own to her Instagram Story. 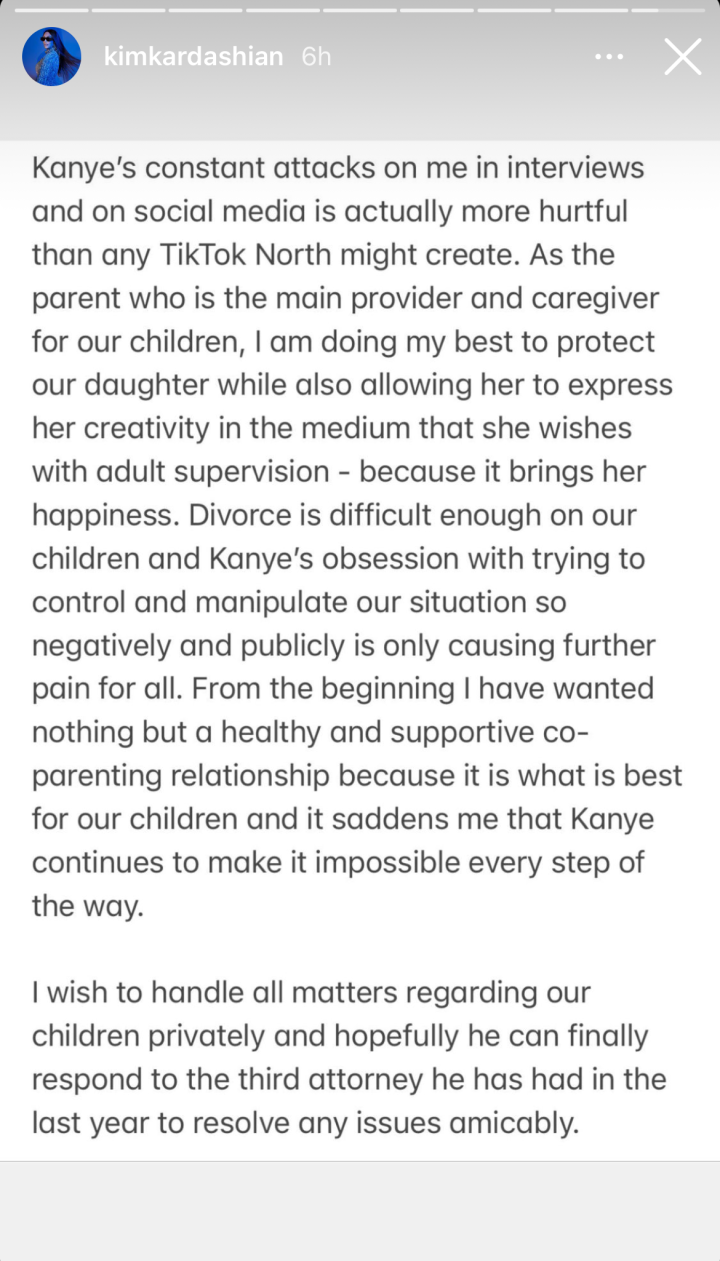 “Kanye’s constant need for attacking me in interviews and on social media is actually more hurtful than any TikTok North might create,” Kim wrote.

“As the parent who is the main provider and caregiver for our children, I am doing my best to protect our daughter while also allowing her to express her creativity in the medium that she wishes with adult supervision — because it brings her happiness.

“Divorce is difficult enough on our children and Kanye’s obsession with trying to control and manipulate our situation so negatively and publicly is only causing further pain for all.

“I wish to handle all matters regarding our children privately and hopefully he can finally respond to the third attorney he has had in the last year to resolve any issues amicably.”

In it, Ye responded to Kim’s statement – in particular, the part where she asserted that she was the “main provider” for their children.

“What do you mean by main provider?” Ye wrote.

“America saw you try to kid nap (sic) my daughter on her birthday by not providing the address.

“You put security on me inside of the house to play with my son then accused me of stealing.

“I had to take a drug test after Chicago’s party cause you accused me of being on drugs. Tracy Romulus stop manipulating Kim to be this way…”

For context, Tracy Romulus is a publicist and current chief financial officer of Kim’s brands as per The Sun.

In the post, Kanye references an incident where he alleges the Kardashians almost made him miss four-year-old Chicago’s birthday after they supposedly withheld the party address from him. Kanye eventually made it to the event.

In the most recent update to the saga, Kanye posted a screenshot of TikTok’s “downloading the app” terms and conditions page which talks about how a user’s age affects their experience on the app.

The upload is presumably a swipe at eight-year-old North’s presence on the app.

Kanye is rumoured to be bringing his Donda tour to Australia next month but has been informed by the PM that he’ll need to be double jabbed to do so.

Ye also won’t be able to perform on his preferred date at Melbourne’s Marvel Stadium due to a scheduling clash with the AFL because quite simply – footy comes first.