Khloé Kardashian has grabbed a hold of the rumour mill with her lengthy Grinch fingers and has stopped it from spinning any longer, shutting down the idea that she may be dating Too Hot to Handle’s Harry Jowsey. Some rumours are too wild to be true, I guess.

On gossip Instagram page Deuxmoi yesterday, a blind item suggested that after leaving root rat Tristan Thompson in the dust for good, Khloé is now going out with Mr Harry Jowsey.

Sure, she may be 13 years his senior but the rumour was real fkn convincing.

“One of my closest friends works at a very well known PR agency in LA & it’s confirmed that Khloé Kardashian and Harry Jowsey are talking,” the blind item read.

If a Deuxmoi blind uses the word “confirmed” who are we to fight against it?

READ MORE
Tristan Thompson Has Admitted To Root Ratting Behind Khloe Kardashian's Back, Shocking Nobody

“Apparently they’ve been DM-ing back and forth and texting, and then last night he picked up a Bentley and flowers just to deliver them to her house.”

In some alternate universe, this really did happen and we’re all readily embracing the Kardashian-Jowsey empire that awaits us. It would surely be a touch less chaotic than the Kardashian-Davidson mess. 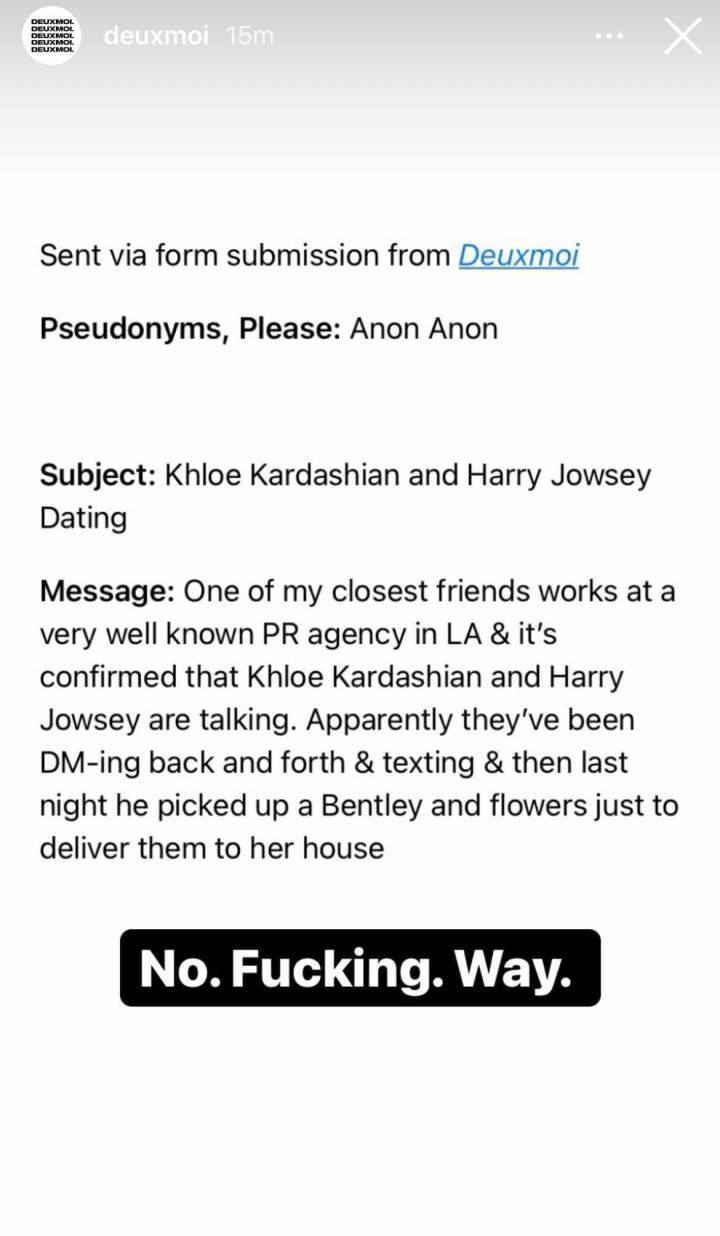 Despite everyone and their nonna being thoroughly entertained by the idea of this couple, Khloé Kardashian herself wasn’t too impressed and decided to shut the rumours down in a single comment.

Damn, couldn’t even let us have fun with this wild idea for a few more hours, could you?

Khloé wrote her response in the comments section of the Kardashian gossip Insta page @theekarjenners, calling all of the rumours “ABSOLUTELY NOT TRUE”.

If my English teacher was here he’d say that the use of capital letters here was used to convey an extra level of meaning. I think she’s trying to say that the rumours are full of shit? Maybe? I dunno.

According to the Daily Mail, not only are the rumours completely false, but Harry Jowsey was spotted smooching his new girlfriend Sveta Bilyalova in Costa Rica. So yeah, safe to say he’s pretty busy at the moment.

I’m just gonna go and wait for my Bentley full of flowers.