Today marks 20 years since Kath & Kim first entered our lives and made them worth living.

Such an occasion deserves to be celebrated with a box of Shapes, a bottle of Baileys and some noice, different, unusual facts about the foxy series that you may not know.

So crack open the Tia Maria and have a geeze at these 20 facts to celebrate 20 tizzy years!

1. Purveyor of Fine Meats wasn’t the only award-winner

Kel may have reached celebrity status and scored invites to oodles of tizzy events like the Gloria Jeans opening after his award win, but the series itself also cleaned up in the award department. Throughout its run, Kath & Kim won a total of six awards, including three AFI awards and three Logie awards.

2. Prue and Trude are based off actual people 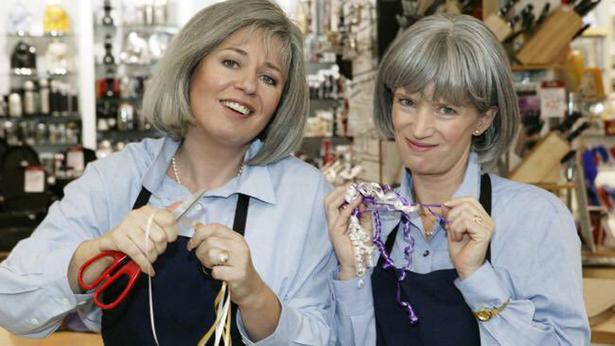 According to IMDB, the greash gals known as Prue and Trude are based off two actual employees from the Minimax store in Camberwell. Both of the women still work there, apparently, and I wonder if either of them have run a colour through that grey yet. I mean, what has she come as?

Although Kath & Kim did not coin the term ‘muffin top’, it did make it balloowun out on all sides in the early noughties and it hasn’t really gone away since, now has it? Even with a bit of electronic wobbling.

4. Magda Szubanski and Jane Turner / Gina Riley got up each other’s goats at the start

Did the sparring between Sharon and her second best friend Kim seem a little too real? Well that’s because apparently they did not get along well at first, nor did Magda and Jane.

“I hated her on sight,” Szubanski said about Riley in 2015. “The dislike was mutual. I thought she was a crass show-off and she thought I was a stuck-up snob. We were both right.

“When we finally overcame our pride and prejudice a year later when I moved in with a mutual friend, Gina and I completely fell in love over the phone when she would ring to speak to him and get stuck talking to me.”

Szubanski first met Turner on The D-Generation and said she initially felt threatened by her.

“Jane and I can be a little oil and water. We both love one another’s work but we don’t always mesh well,” Szubanski said. “Jane has a completely different rhythm from me as if one of us is doing a foxtrot, while the other is trying to samba. Luckily, we are deeply fond of each other and are capable of making each other cry with laughter.”

This one isn’t Kath & Kim related, per se, but as a die-hard fan, I certainly found it interesting that Glen Robbins (a.k.a. Kel Knight) almost played the villain in Wolf Creek.

Can you imagine the great hunk o’ spunk himself playing the terrifying fictional serial killer? I shudder at the thought.

6. Kath’s lewks were purchased from op-shops 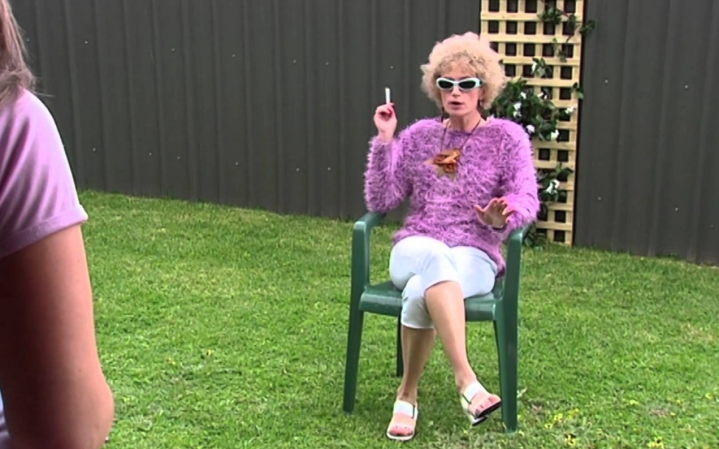 In the episode Environment, Kath Day-Knight is shown to be an eco-friendly queen so it stands to reason that her clothes should be sustainable, right?

Costume designer Kitty Stuckey told Sydney Morning Herald in 2003 that style guru Kath’s wardrobe is all “definitely second-hand” (aside from the personalised tote, I’m sure).

“I go to Savers stores for them … She likes her jewellery to match her shoes and thinks of dressing as ‘teaming with a theme’.”

7. Kim’s lewks, however, are as shiny and new as mouth bling 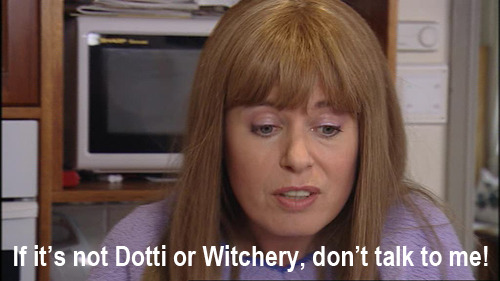 “My idea, especially with Kim, is that I like to dress her in what is available in the malls at the moment,” Stuckey added.

“So I shop in the ‘cheap and cheerful’ women’s type shops and get the worst of that end of the fashion.”

8. The lewks are Kylie Minogue inspired (AKA the IRL Epponnee)

Stuckey continued, “Basically, it’s like any girl who’s reading the women’s magazines and seeing what Kylie Minogue is wearing and aiming for that, but not quite making it, as many aren’t — there’s a million Kims walking around shopping malls!”

9. The theme song is from the musical The Roar of the Greasepaint — The Smell of the Crowd

The catchy theme song is called ‘The Joker’ and it’s from a musical called The Roar of the Greasepaint — The Smell of the Crowd.

I’m sure you already know this, but it’s sung by Gina Riley who has “had classical training for years, but I am no classical singer,” she told The Australian.

“It was good grounding in understanding your voice and breathing. I’ve done a few musicals; I love to have a bit of a sing.”

10. All the eps were written at Jane’s home

Gina once revealed that all the episodes were written at Jane’s comfy abode because apparently an office setting was too OTT for them (and for Barb).

“We tried to have an office once, but we just couldn’t do it,” she told The Herald Sun. “There was no food on tap; we have to be in domestic surrounds, I think.”

The foxy ladies would often find themselves distracted while writing, so they opted for a different setting.

“Yes, I think our record for lunch once was 10am,” Riley said.

While speaking to the Herald Sun, Gina revealed that their characters aren’t the only ones who are clumsy.

“We have deleted whole episodes by mistake, too,” she said. “We’ve done that twice. We weren’t able to get them back, so we had to rewrite them straightaway so we wouldn’t forget. It always happens just before school pick-up as well.”

Can you imagine what woulda happened after the second time?

“Ohhhh jingies! Here we go again, peoples. Go get the boomerang pillow from upstairs! Throw the wheat-bag in the microwave! Tout suite!”

12. The first incarnation of Kath & Kim was canned

The characters were first created for a sketch comedy show called Big Girl’s Blouse, and following the positive reaction, they decided to spin it into a TV series for ABC but sadly, just three days before production was set to kick off, ABC pretty much said: “you can get stuffed, the pair of yas.”

“We had this phone call saying they had decided not to go ahead with Kath & Kim and we were like, ‘What? … Anyway, Gina, what were we saying about this script?’ We just kept going. We were too far down the track and had such faith in it,” Jane told The Herald Sun.

The called ABC back and ultimately got the great big bloody oafs to change their mind.

Look, I debated whether or not to put this one on the list because it’s so bloody obvious (and so bloody heinous), but I figured that some fewls out there might not be aware.

So basically the tl;dr version is that NBC got wind of the beloved Aussie series back in 2008 and crafted their own version featuring the same name, the same concept and the same slang and terminology as our Kath & Kim but, of course, it was an epic disaster.

Read more about it here.

While most of the episodes are written by the gals ahead of time, the ‘Wine Time’ scenes at the end were totally improvised on the spot using ‘yumour.

Despite the fact that Kath plays the matriarch of the family, the actress is actually five months older than the actress who plays her daughter, Kim. Must be the chooky neck (kidding, she’s a stunning queen and I’d literally die for her).

READ MORE
Remember When The Americans Thought They Could Do Kath & Kim Better Than Us?

16. Russell Gilbert was considered for the role of Brett Craig

17. Kim’s wedding dress in Kath & Kimderella has a royal origin

18. In recent years, the show’s been labelled “problematic”

Recent critics have called out the show for being “problematic,” claiming that it “mocked Westies.”

“A newspaper critic had criticised us for mocking Westies, which I don’t think we did,” Jane Turner told TV Week.

Her defence? They were using ‘yumour.

“We [the characters] were more middle-class than that. We weren’t bogans who wore moccasins and were scungy,” she said.

Jane added that many ‘Westies’ were in fact huge fans of the show and ditto myself, as a Westie.

“A lot of people wrote to the paper saying, ‘Well, we’re from the western suburbs and we love it,’” she concluded.

19. The cast is down for a revival, but it’s doubtful

While speaking to PEDESTRIAN.TV about her epic Uber Eats ad with Kim Kardashian, Magda said although she’s totally keen to reprise her role, she doubts it’ll ever happen (again).

“My gut feeling is that we have kind of exhausted everything,” she told us. “If there was a brilliant idea, of course I’d be up for it – I’m not saying no, but I don’t think anyone has the appetite for doing it at the moment. I think we all know that we don’t want to mess with it.”

20. The Kath & Kim house has been demolished

As many of you may know, the iconique house was recently demolished by its owners, which is not noice. Not noice at all.

Kath & Kim is now streaming in its entirety on Netflix.