Julie Bishop is Not Comfortable Calling Herself a Feminist

In a Women In Media address today at the National Press Club, Foreign Minister Julie Bishop declared in no uncertain terms that she does not refer to herself as a feminist, saying that she is “first and foremost” a politician.

The Guardian report that, during question time, a journalist asked Bishop whether she self-describes as a feminist, to which she responded that the term is not one that she finds “particularly useful” these days.

“I recognise the role it has played,” she continued. “I certainly recognise the women’s movement and the barriers they faced and the challenges they had to overcome.”

“It’s not something that I describe myself as. I’m not saying I’m not a feminist, I don’t reject the term, I’m just saying it’s not a way I describe myself. First and foremost I’m a parliamentarian, a minister. I don’t find the need to self-describe in that way.”

When pressed on whether she avoids the term for political reasons, given the fact that conservatives these days tend to shun anything with a whiff of progressive ideology about it, she insisted not.

“I self-describe in many ways,” she said, “I just don’t use the term … It’s not part of my lexicon. It just isn’t. And I don’t think anybody should take offence of that or read anything more than that into it.”

“I’m a female politician. I’m a female foreign minister. Get over it!” she said, to the laughter of the audience.

When asked if she has faced any career roadblocks because of her gender, Bishop was adamant that she has not. “I’m not saying there is no glass ceiling,” she said, “but you’re not going to get me saying that my career has been stymied because of a glass ceiling.”

“That would be inappropriate for somebody in my position to suggest,” she continued. “I might look at whether I was competent enough or I worked hard enough or did the breaks go my way but I’m not going to see life through the prism of gender.”

However, when asked to give her view on whether Julia Gillard, the first woman to serve as Prime Minister of Australia, was the target of sexism or misogyny during her time in office, Bishop somehow decided to go with “no.”

“I recognise that there was an extraordinary outpouring of goodwill towards Julia Gillard as our first female Prime Minister,” she said. “But then, as should be the case, she was judged on her competence. And that’s where she was found wanting.”

“She then turned herself into a victim and portrayed herself as a victim. That was her choice. But as far as I’m concerned she was being judged on her competence, her honesty, her performance as prime minister.”

Now sure, on the one hand, Julie Bishop is an adult and her own person, and can self-identify however the hell she chooses, even if she is one of very, very few women in the current Abbott government.

On the other, to suggest that Julia Gillard “turned herself into a victim” by choice and was not subjected to sexism – be it by the media or her fellow politicians or the placard-writing public – is frankly fucking absurd. 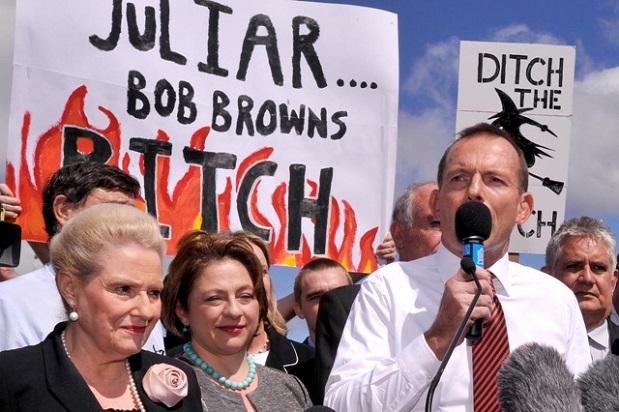 In interview earlier this year, Gillard spoke about the sexist attitudes that still permeate in the upper reaches of power.

“I think for men, that conversation starts with: what kind of leader will he be?” she said. “You know, strong, weak, compassionate, strident. I think for women it starts with: can she lead? And it’s a subtle but significant difference.”

Lest we forget the incredible dressing down that Gillard gave her eventual successor Tony Abbott – the man who once tried to explain the carbon tax to the women of Australia in terms of ironing – on the subject of misogyny in federal politics.

In fact, we’ll just go ahead and leave this here: