Ya know JoJo? No, not the ‘Get Out’ singer. I’m referring to JoJo Siwa, that pony-tailed teeny bopper who sells all that sparkly, colourful shit and once starred on Dance Moms.

Well, she’s finally let her hair down for a TikTok challenge and the whole allure has been demystified.

The TikTok challenge is called the ‘Wipe It Down challenge’ and it involves the user spraying their mirror with cleaner, then once they ~wipe it down~, they show off a brand new lewk.

Said lewk is one that’s blowing up Twitter as punters aren’t used to the lass sans ponytail.

Check it out here. 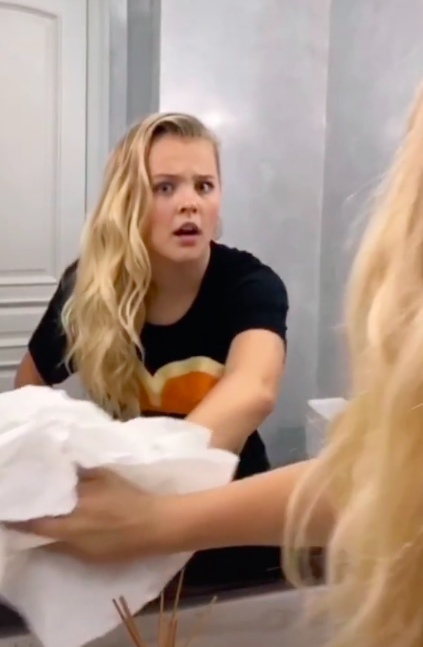 Punters are divided on her new ‘do, meanwhile. Some are loving it for her:

Jojo siwa finally letting her hair down and looking like a bad bitch pic.twitter.com/67cmMIN65d

jojo siwa dressing normally and having her hair down is so magical bro i swear pic.twitter.com/WZsz16v3sz

i have nothing against jojo's brand but you can see just how happy she is when she's wearing other stuff and when her hair is down. https://t.co/GSZFj7BmXf

she looks more comfortable in the second frame. like she was in so many clothes and her hair was in the tightest ponytail ever and then she changed into a comfy outfit. stan jojo siwa pic.twitter.com/pkbYIoFhUn

Some aren’t are a fan and miss her iconic ponytail:

And some are just plain suss about the whole thing:

jojo siwa looks great with her hair down but i personally am so suspicious that her hairline wasn’t pushed back like 15 yards after years of those tight ass ponytails. don’t act like you weren’t shocked either pic.twitter.com/JZNuFfnevG