The answer to the second question is: yes. The Oppenheim Group is real. It’s a brokerage in West Hollywood, and brothers Brett and Jason Oppenheim are legit.

The answer to the first question is a little murkier. There are claims all over Twitter and Instagram that the agents aren’t ‘real’, but instead actresses who got a license in order and are pretending to show houses. This is very grain of salt, mind.

Chrissy Teigen, bless her, is now leading the questions into what’s real vs what’s fake on Netflix’s hit show. She binged all three seasons of Selling Sunset after Twitter wouldn’t shut up about it, and then immediately asked her agents the important questions.

“I will say, I look at LA real estate a lot and have never seen any of these people lol either have our agents, who I have obsessively asked,” Teigen said on Twitter.

I will say, I look at LA real estate a lot and have never seen any of these people lol either have our agents, who I have obsessively asked.

Those tweets popped off to the point where Jason Oppenheim himself chimed in.

“Chrissy, thanks for watching our show! Regarding your agent’s knowledge of members of my team, I respectfully don’t know him either although that doesn’t mean he isn’t successful and didn’t just sell you a stunning home in Weho (seriously, I love your new house).

Two of the agents – Davina Potratz and Maya Vander – also denied they were ‘fake’ agents, in an interview with E! Online.

“I know a lot of agents and if you’re not a luxury condo buyer, you may not know me, but I closed and sold deals for $9 million and up,” Davina said. “So, certainly I’m not offended by anything that [Chrissy] said.”

Maya said she splits her time between LA and Miami, which is why Chrissy’s agents might not have heard of her.

“Oddly enough, I did sell a house on the same street where she and John Legend purchased a house a couple of months ago,” Maya said. “If she ever wants to buy in Miami I’m here to help!” The hustle never stops.

Before the season aired, real estate agent Chrishell Stause (who used to be an actress, which obvs fuels these rumours) hit back at claims the show was scripted.

“The show isn’t scripted,” she said.

“If it was I would be pissed! Who wrote that plot twist?!” Reminder: a Season 3 plotline revolved around Chrishell’s husband telling her he wanted a divorce – via text. “But seriously,” Chrishell continued, “they can sometimes nudge us to address things but what we say is all us. Beware anyone that says otherwise. Gotta own it.” 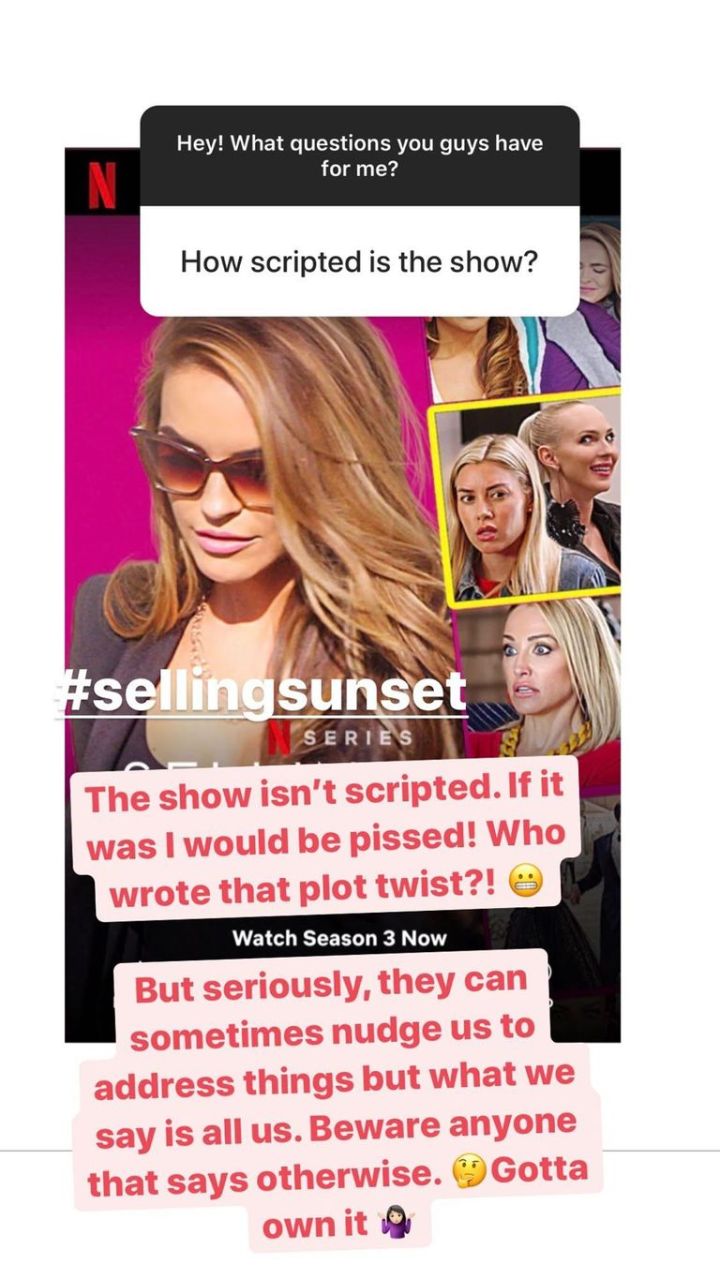 But now we get to my favourite part of this spicy drama: a woman who says she owns one of the houses featured in Season 1 claims the agents made up everything.

On the show, agents Christine Quinn and Heather Rae Young tell a prospective buyer their client is a male plastic surgeon in Europe. In a TikTok video posted yesterday, user @petite_sayo says she owns the house, is a property developer, and was in LA the whole time.

In response to a comment that Christine “didn’t want to sell to Heather’s client”, @petite_sayo said “she’s a good actress” with a couple winky face emojis.

DRAMA. SPICE. TEA. OTHER WORDS FOR TRASH GOSSIP WHICH WE LOVE.

READ MORE
Just Gonna Say It: The Best Way To Watch Selling Sunset Is By Skipping The Dialogue

So is Selling Sunset all fake? Is some of it real? We’re not 100% sure. If you want the tea, the deuxmoi Instagram account has been posting a HEAP of Selling Sunset gossip on its stories recently (although none of those can be confirmed, thus is the nature of the blind item).

Either way, Davina – who has emerged as the villain most evil – definitely hinted that all the drama is fake. Guess she would, huh.