Hungover movie reviews? What does that even mean, Pedestrian? Max Lavergne explains: “I saw Red Riding Hood on the weekend because I got really drunk the night before and wanted to sit in a soft chair in the dark. This is less a review of Red Riding Hood than reasons for you to not see it.”

– This movie is directed by Catherine Hardwicke, director of Twilight. That’s OK, right? Just because someone has previously directed a Twilight film, it doesn’t mean anything else they direct is necessarily a horrible, poorly thought out feelings-fest which is fuelled by tragic teenage clichés regarding love and social acceptance. “It ain’t necessarily so!” – An old man (aka me). Unfortunately, that is exactly what this is. What is Twilight’s deal? It is like a bubonic plague of terrible!

– I guess the moral of this movie is, like, “better the devil you know”, maybe. Because at first there’s the wolf, who occasionally eats people, but then they hire King Gary Oldman to fight the wolf, but actually all he does is cook a autistic kid in a bronze elephant and generally be a nasty dude who is mean to the villagers. And then in the end Amanda Seyfried kills the wolf herself anyway, so they didn’t even need him! I guess what I’m trying to say is that there is no discernible moral to this movie, which means minus 1 point for a supposed “adaptation” of a fairy tale.

Gary Oldman in his role as the Burger King mascot.

– OK, there are so many things about this movie which straight up do not make sense. Like the bit where the villagers decide they will kill the wolf themselves, and several men very helpfully point out that the wolf won’t come out in daylight, won’t cross onto holy ground (i.e. the church) and is vulnerable to silver. An excellent start! When I have a problem to solve, I also weigh up my strengths against my weaknesses. Unfortunately, right after that they decide to hunt the wolf in a cave at night with their wood chopping axes. WHAT HAPPENED, GUYS? I believed in you! Then there is the bit where King Gary Oldman is a famed werewolf slayer when actually he’s only killed one and it was his wife. Great. Also, he has black slaves for some very offensive reason. Then, at the end, after Amanda Seyfried kills her dad who is the wolf (sorry if I spoiled the movie for you there (NB I’m not sorry because don’t see this movie)), there is a very graphic scene where she cuts his body open, stuffs large rocks into his chest cavity and sews him up again. Yep. The camera even zooms in on the bloody thread. It’s one thing to want to make sure no one ever finds your dead father’s body, but did there need to be surgery? Did she need to look totally bored as she sewed his body closed? These are my questions. 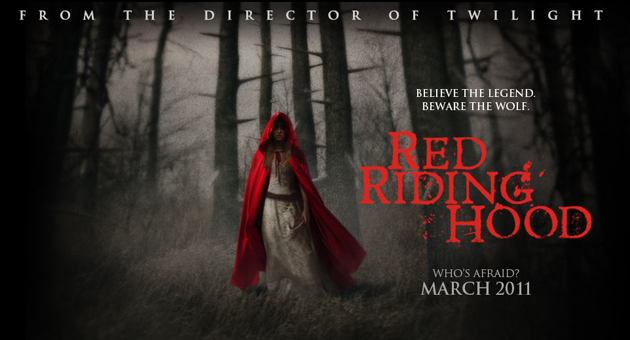 More accurate tagline: “Nothing to do with the legend. Have implied sex with the wolf.”

– This movie is a flimsy excuse to have an idiotic, malleable girl fall in love with a werewolf and have them be able to fuck without Stephanie Meyer’s mormon prudishness getting in the way. This is literally Twilight without vampires and with Amanda Seyfried getting dutty with a lumberjack, and that is a great concept and it would be FINE except that this movie is TERRIBLE. Ugh.