Ahh, Federal Election day. That particular day that rolls around once every three years where you get to find out what the inside of your local primary school’s hall looks like.

For you see, the day isn’t just about lining up to put a bunch of numbers down on a page whilst trying to not collapse the flimsily folded together cardboard polling booth. Oh, no. It’s about pride. It’s about passion. It’s about celebrating the tradition held dearer to the bosom of Australia than most of our family members. We are talking, of course, of the grand practice known as the Democracy Sausage.

An election just isn’t an election without a sausage sizzle crackling away in the background. It’s the true soundtrack of freedom!

But, like all things, there are Do’s and there Don’ts when it comes to the democratic snag. What’s the code of conduct? How do you best attack it? And how do you best observe sauce etiquette?

PEDESTRIAN.TV‘s senior news editor and resident sausage-enthusiast (real title) Cam Tyeson has compiled this entirely (un)helpful guide to getting the most out of your election day treat.

So just as knowing exactly who to vote for is of the utmost importance, so too is knowing exactly which polling station near you is slingin’ up the good biz. Fortunately in this marvellous digital age, there are plenty of resources that’ll arm you with the knowledge needed to ensure you get that snag.

Both Election Sausage Sizzle and Democracy Sausage are vital resources. Bookmark them. Do your research. Who knows, you might hit the jackpot with a bonus cake stall as well.

Timing isn’t just everything. It’s the only thing. You might be tempted to have your sausage in the line while you wait. You would be false in this temptation. A Democracy Sausage is not something you can just waltz up and consume. It must be earned. Therefore, it is only appropriate to procure a sausage after you have successfully voted.

It is your reward for helping to shape the fabric of Australia; a way for the land you stand on to thank you for doing your part. It is a victory sausage, and it tastes way better when you’ve dropped your 1s and 2s. Walk free from that church hall/school building/public space and shove it in your gob. You deserve it.

‘Course if your snag game is operating at pro levels, you can absolutely have one before, and one after voting. The ole’ double banger supreme. We call that move the Bunnings. One on the way in. One on the way out. Bellissimo.

Diagonal only. Accept no substitutes. Sure, they might be busy, and the amount of sausages they have to sling out during the day might be ungodly. But any grill master who lays a sausage horizontally in a piece of bread is an amateur, a fraud, and should be exposed as such in the public square.

Only diagonal provides you with the optimal snag-to-bread ratio, and allows for adequate sauce delivery along the length of the beast. Horizontal is for babies, cowards, and Kiwis. Turn that shit.

Are you allowed to ask for gluten-free bread? Here. Have a flowchart. 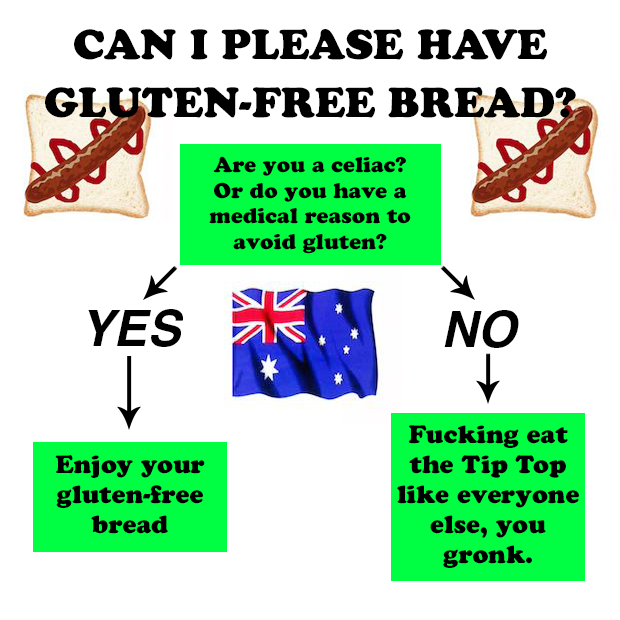 Any good barbecue worth its salt will divide the grill neatly in half: Bangers on one side, onions on the other. Ideally, having onion on your snag should be an extra that comes free-of-charge. Charging for onions is permissible, but it is strongly frowned upon, and any demand for extra money should be treated with naught but contempt. Frown at the bastard who dares ask you to part with an extra 50c. Having to pay for onion at a sausage sizzle is like having to pay $5 for a bottle of water at a music festival. I mean, I’ll do it. But do not expect me to be happy about it.

Fancy extras such as bacon or mushrooms and such, on the other hand, are perfectly fine to charge for. But they should remain untouched; withering and dying in the July sun. Because this is a sausage sizzle. Not bloody MasterChef.

Any sauce that is not absolutely free is an affront to the country and should be considered treasonous. Barbecue and tomato are acceptable. All others are not. This includes mustard.

American independence day is on Monday. Save your seppo slop for then.

Gold coin. No excuses. No variations. Nothing. And don’t stinge on the denomination. Hand over a two-banger for your one banger. You’ve made it this far, now’s not the time to get cheap. Maybe – and I stress *MAYBE* – $3 for a snag is acceptable, but only if it’s a fancy butcher’s sausage with herbs and cheese and shit in it. Only the good gear is worth that much money. Anything else? $2. Slap it down. Meat, vegetarian, whatever. Hell, even if they BBQ is completely free, slap that shit down on the table. Those kind people are slaving over a hot grill all day to bring you your constitutional rights. They’ve earned it.

You follow all these simple guidelines, and your election day is not only going to be democratically fulfilling, but stomach filling as well.

Enjoy the day! And enjoy your snag!