One Of Those Rare As Hell First Edition ‘Harry Potter’ Books Has Sold For $50,000

In this week’s edition of WHY CAN’T THIS HAPPEN TO ME: an original first edition Harry Potter and the Philosopher’s Stone novel has sold for an easy £28,500 at an auction. That’s just a little upwards of 50,000 Aussie buckeroos.

The novel then spent a good period of those 20 years in a cupboard, before it was discovered by auctioneers.

UK auctioneers Hansons, who handled the sweet deal, revealed that when you chuck in the buyer’s premium and the VAT (Value Added Tax), the total price paid for the book was £34,200 (AUD$60,200).

The parties involved wished to remain anonymous but the seller said he’s going to spend the money on a bathroom reno.

On its website, Hansons’ Head of books and works on paper Jim Spencer said he was “slightly caught in disbelief” when he first saw the book.

I found the book when I was called to a client’s house near Stafford to value three boxes of books. There it was – the holy grail of Harry Potter books. I was so excited. Every book valuer dreams of finding one of these.

“I receive calls every week from people saying they have a first edition Harry Potter,” he added. “In fact, when news of this discovery broke, I was receiving 50 emails a day. But most copies can invariably be ruled out in seconds.”

Only 500 of these rare babies were published in 1997 and 300 went to libraries, Hansons said. So the chances you (I) have one of these lying around… way across the pond… is so painfully low.

FUN FACT: the wizard that appears on the back cover of the first edition and other editions doesn’t actually exist in the Wizarding World. Illustrator Thomas Taylor wrote in a 2011 blog post that he was commissioned to draw a wizard for the back cover so he decided to draw his father. In later editions, after many confused inquiries, Taylor was asked to create a new drawing for the cover. He drew Professor Albus Dumbledore. 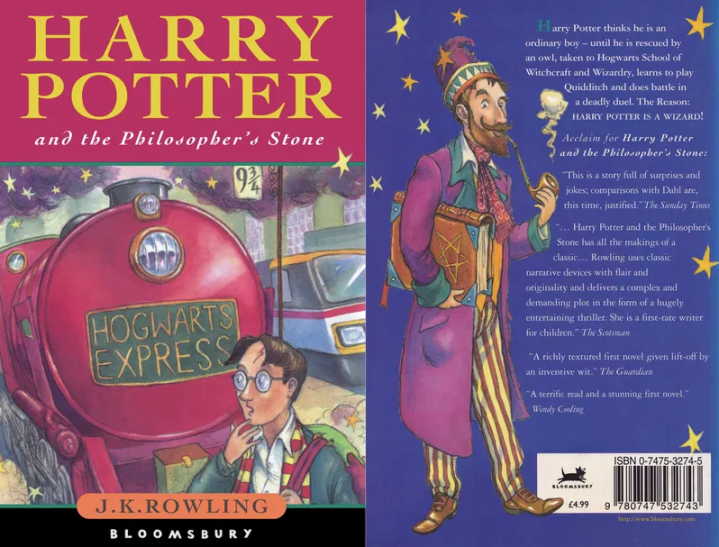