Beloved Aussie and ridiculous birthday cake chef Hamish Blake has given the 12 million of us in lockdown a treat that perfectly reflects our own descent into madness right now, staying up till 4am making a birthday cake for his four-year-old daughter Ru.

But, not just any birthday cake. This is Hamish Blake, celebrity “fucking ridiculous” birthday cake extraordinaire, of course. He wasn’t just gonna go and buy a Woolies mud cake and call it a day. No, no, no.

Last night, he made a unicorn cake out of LEGO, rice crispies, sponge cake, and more, and the whole baking session is nothing short of a wholesome dedicated dad having an early morning/late night mental episode. I feel for this dude.

The cake goal was cartoonishly difficult: “A unicorn, flapping its wings, with a rainbow coming out of its mouth, under a cloud, that’s raining glitter.” In a sketch of the design by his daughter that Hamish shared on his Instagram Story, his soon-to-be creation could only be described as Charlie the Unicorn meets My Little Pony. 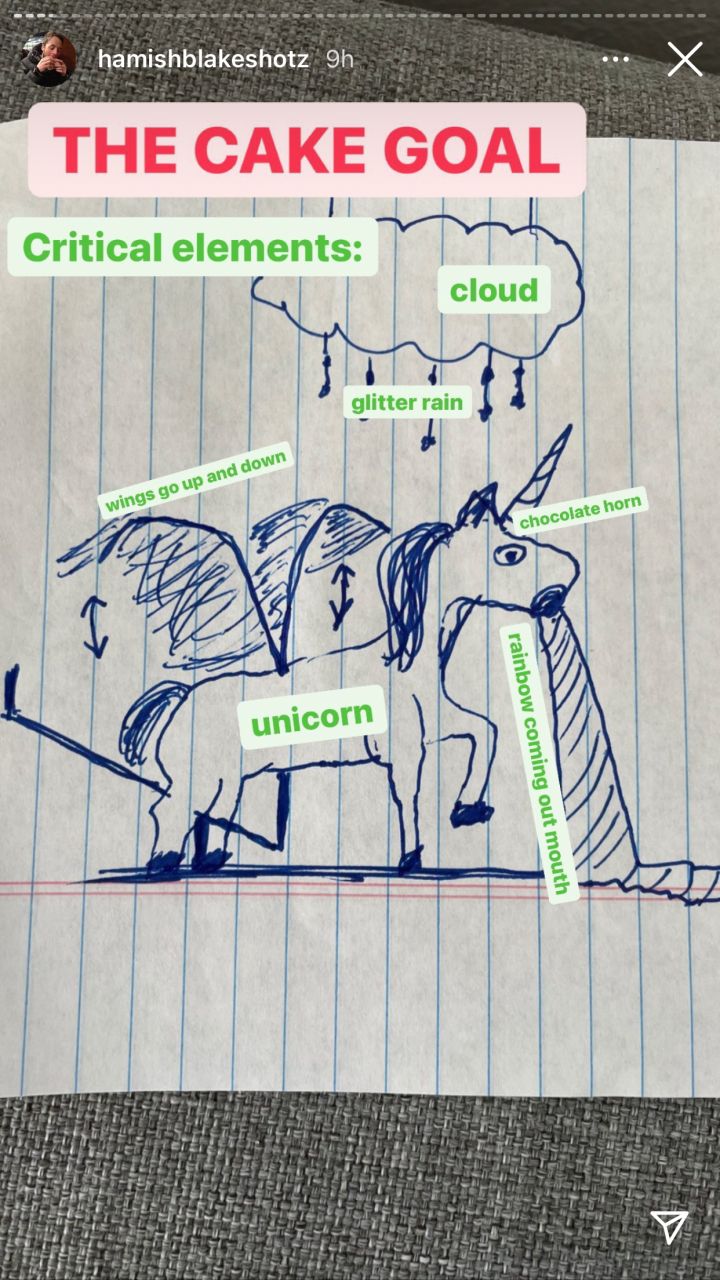 To help build the unicorn skeleton, LEGO Masters judge Ryan ‘Brickman’ Mcnaught sent the TV show host and his co-star a unicorn skeleton made out of LEGO (with moveable wings). Hamish used that as the base of his cake, building the unicorn body around it. 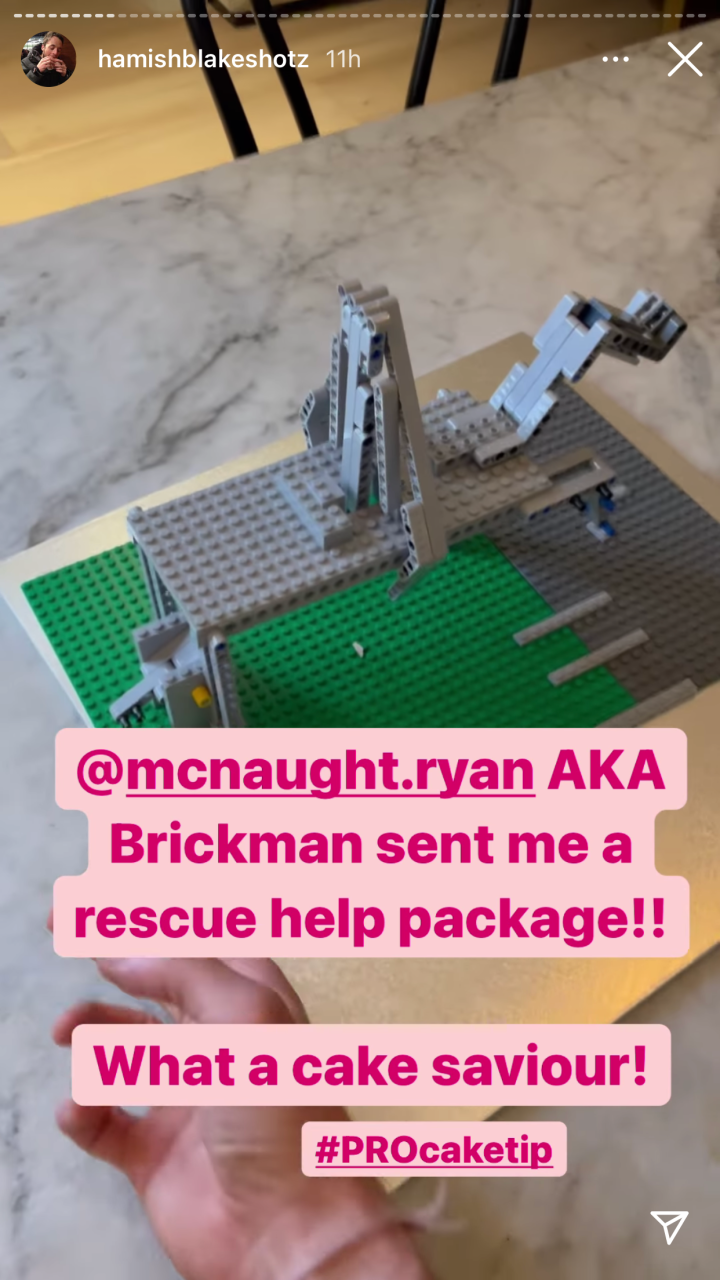 He bought a tie-dyed coloured sponge cake as the base of the unicorn butt and cloud, cutting it in half and sticking one half to the unicorn LEGO skeleton’s behind. He used blocks of rice crisps to create a solid base for the wings and limbs, too.

“In all seriousness, I’ve burnt myself on marshmallow, I have yellow hands, I better get down to it,” Blake said at around 7:30pm.

“I’m probably gonna be mucking around a little bit, that’s alright, we’re having fun. One hour, I’ll check back at 9:30.”

One hour and three baking mishaps later, he admitted, a glass of Tasmanian whiskey in hand: “Hey, this is taking fucking ages so if you need to have an early night, this is not gonna be an early one. I-I-I’m not panicking, I’m just realising that now.”

That’s what the serotonin leaving my brain said when it heard that lockdown had been extended and Melbourne was heading into its fifth one. 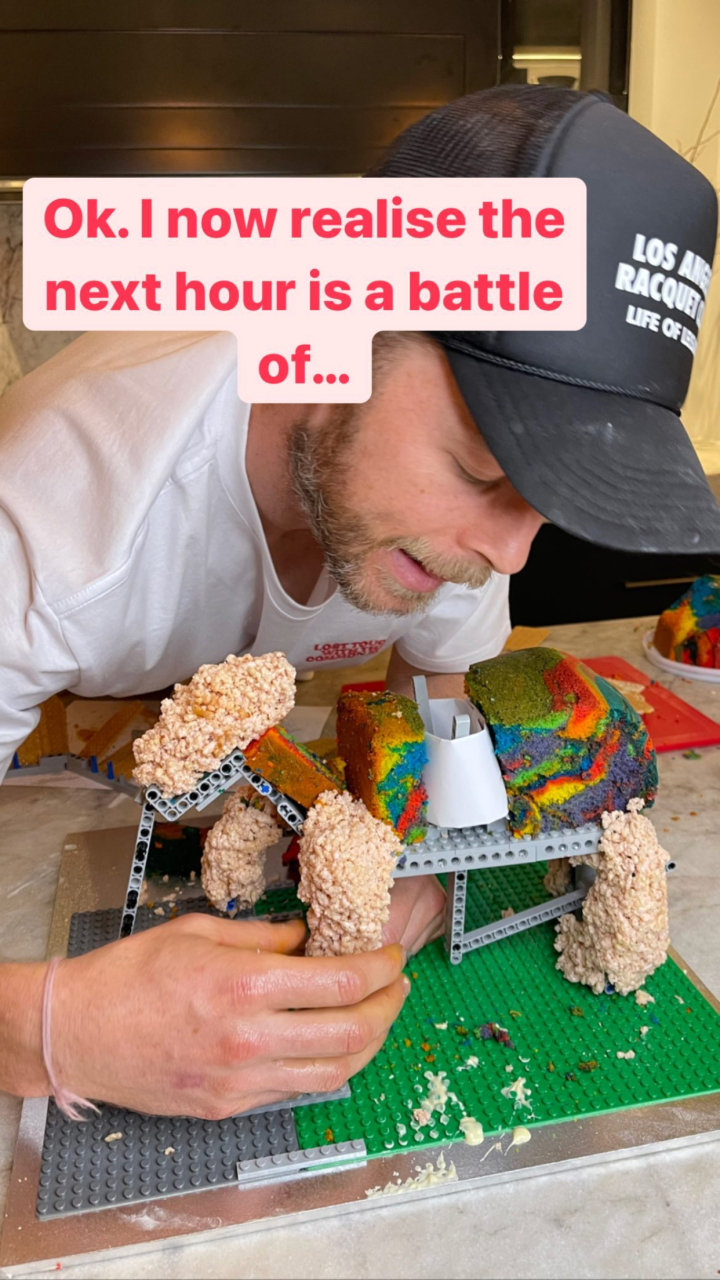 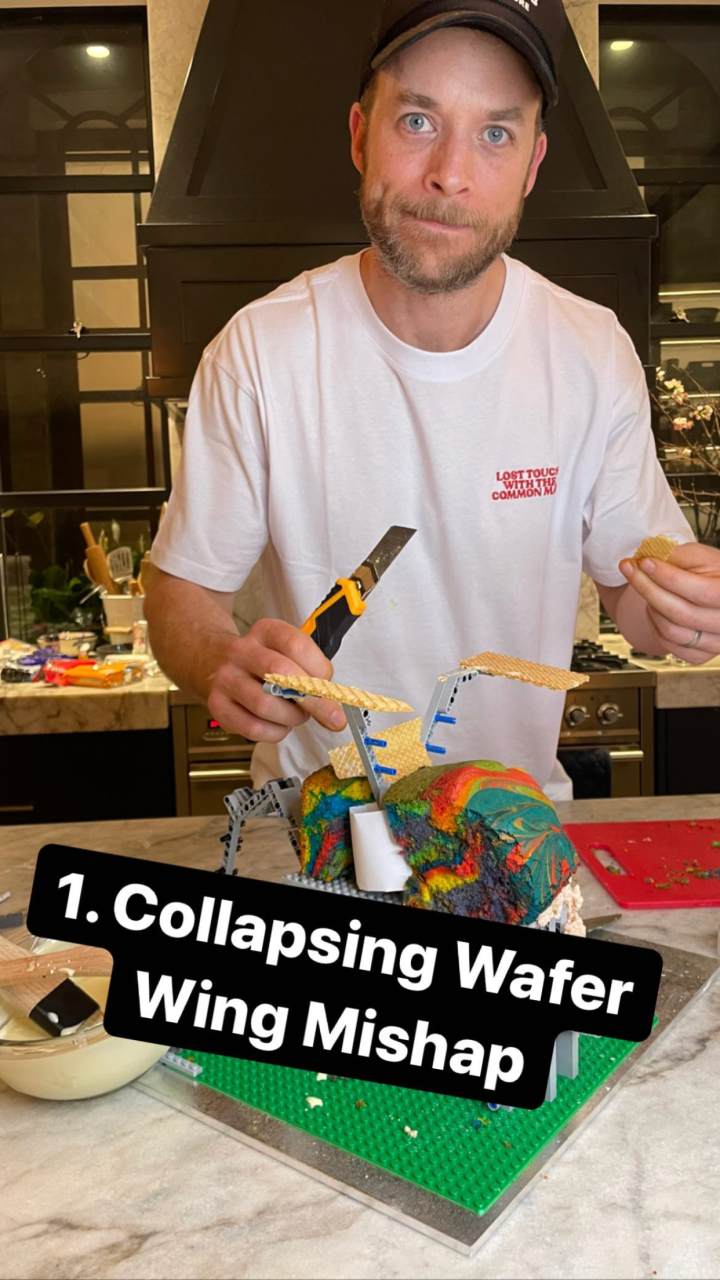 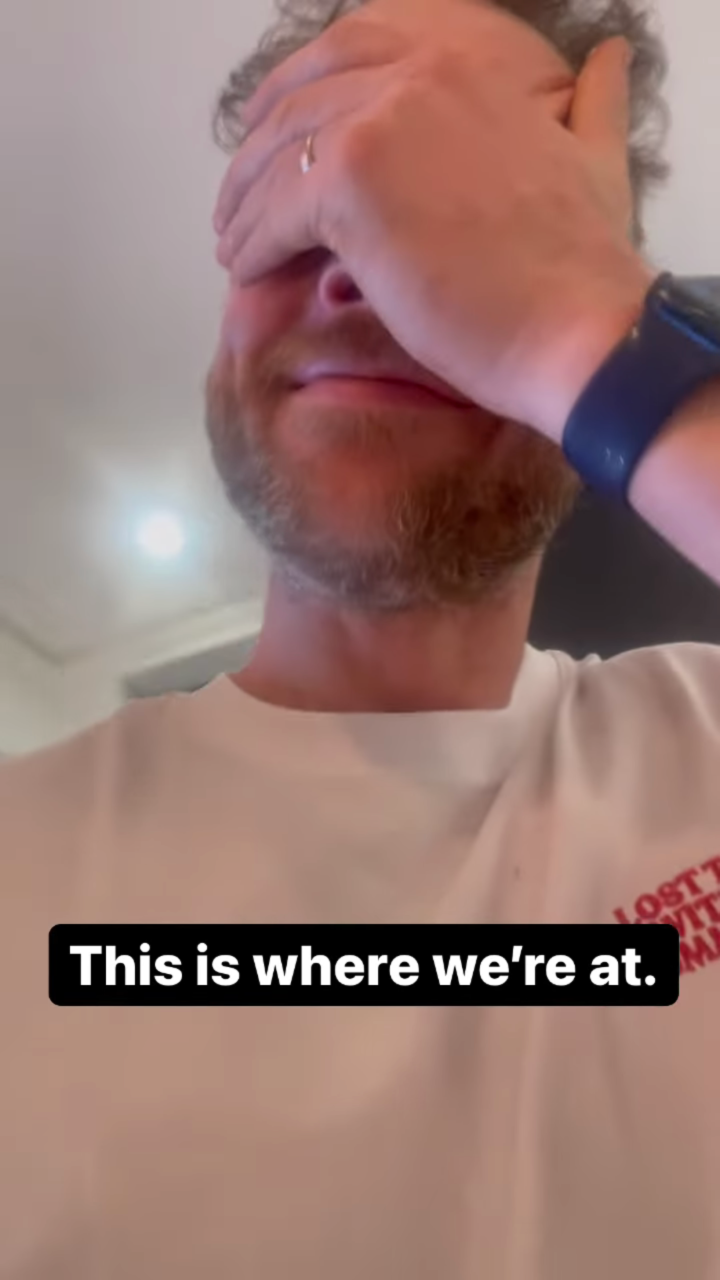 Anyway, to make the cloud, Hamish tried to hang a plastic plate with another cake on a set of hanging lights. After watching fishing line videos to master the perfect line hooking technique to keep the plate afloat, he poked holes into the plate, hoping that glitter would cascade and rain down on the unicorn below. 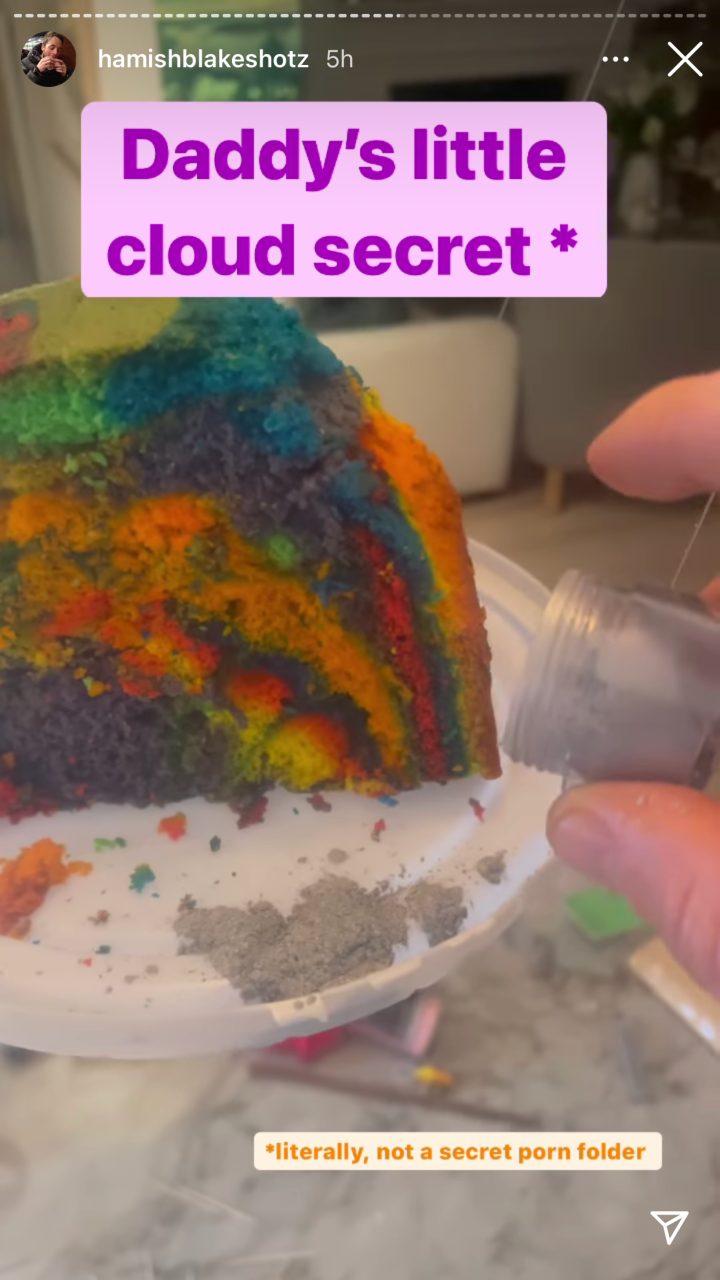 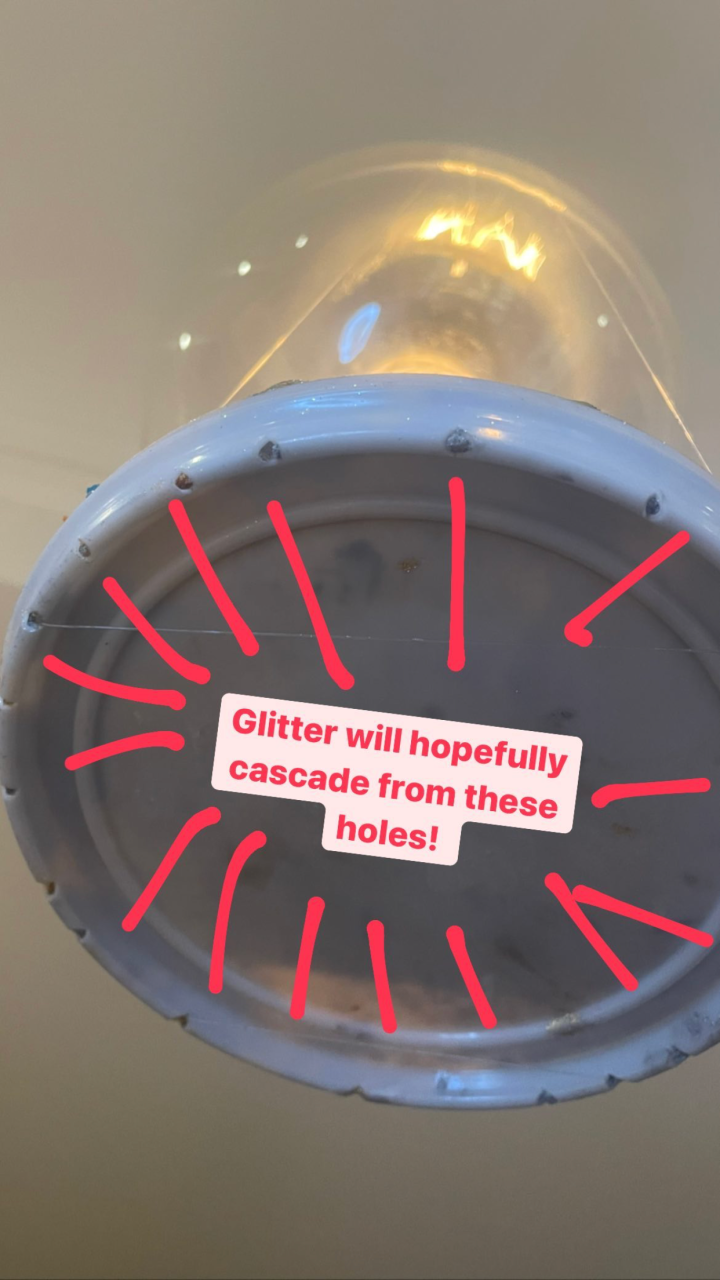 “Let’s be honest, we need a win,” he said, explaining his plan. Narrator voice: it turned out, it was not one.

“The cloud misfired and we had a glitter explosion, and I don’t know if you’ve ever tried to pick up cake glitter before and reload it into a cloud but it’s demoralising.”

Fortunately, he did get to redo it and cover it in white icing and marshmallows by around 1am, and not gonna lie, it really do be looking like a cloud here. 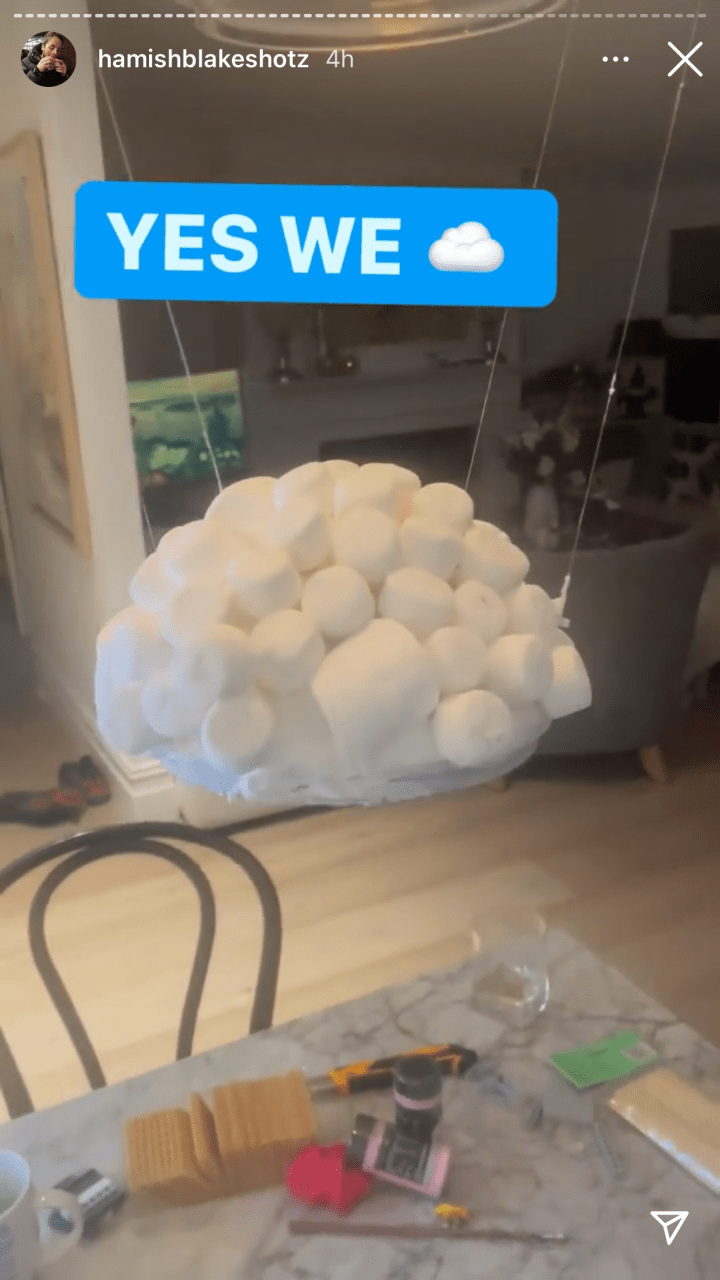 At 2am, the cake starts to take proper shape and colour. At 3am, Hamish Blake comes to a horrible realisation. What he’s making isn’t a unicorn. It’s a unidonkey.

“There’s absolutely nothing I can do. It’s—fuck—it’s 3 o’clock, I just gotta get the wings on. We’re doing a unidonkey, it’s a unidonkey.

“I mean, I haven’t done the eyes yet and they could be beautiful. They could bring it right back to unicorn but at the moment, it’s a unidonkey.

Shortly after that, Hamish’s wife and Aussie author Zoë Foster Blake comes into the kitchen and takes over filming duties, documenting the tail-end of Hamish’s cake-based lockdown madness and his final unicorn creation.

Behold, a pink unidonkey with a body made of fluffy sponge, a horn made out of a frozen ice cream cone, and wings and limbs made out of rice crisps, covered in edible glitter raining down from a marshmallow sponge cloud cake hanging above. Congratulations Hamish Blake, you are the winner of this week’s challenge. 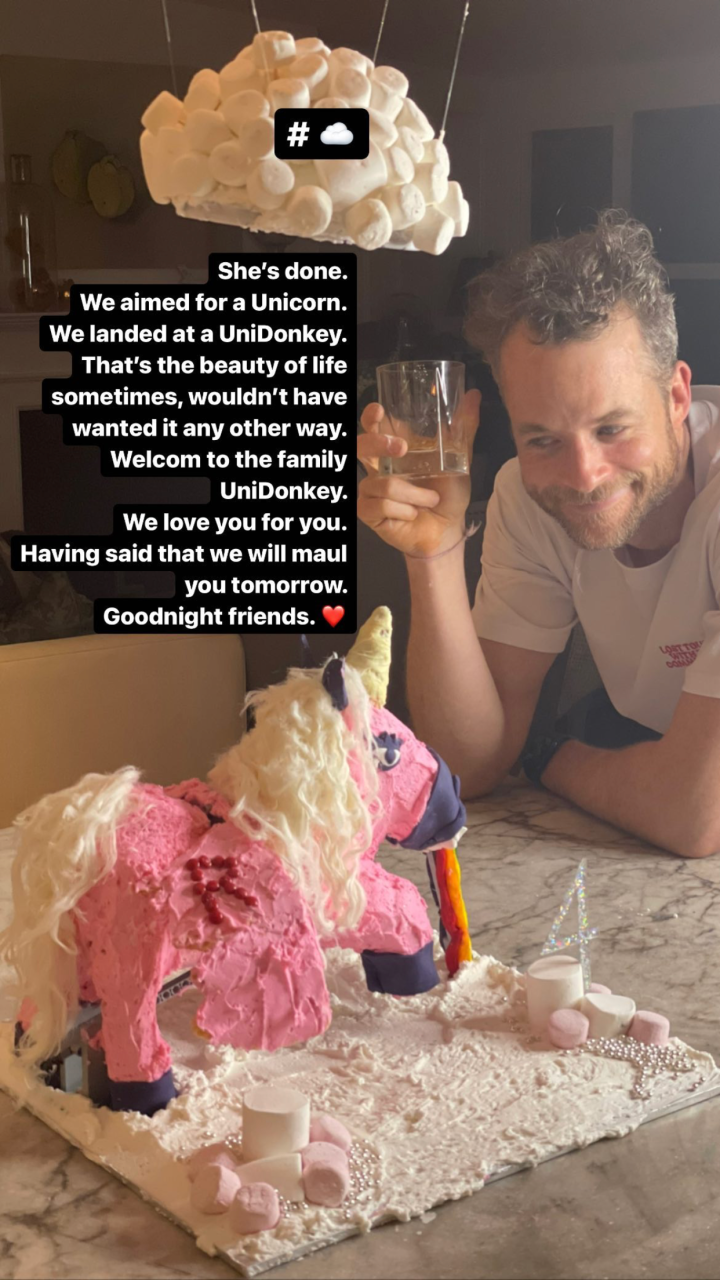 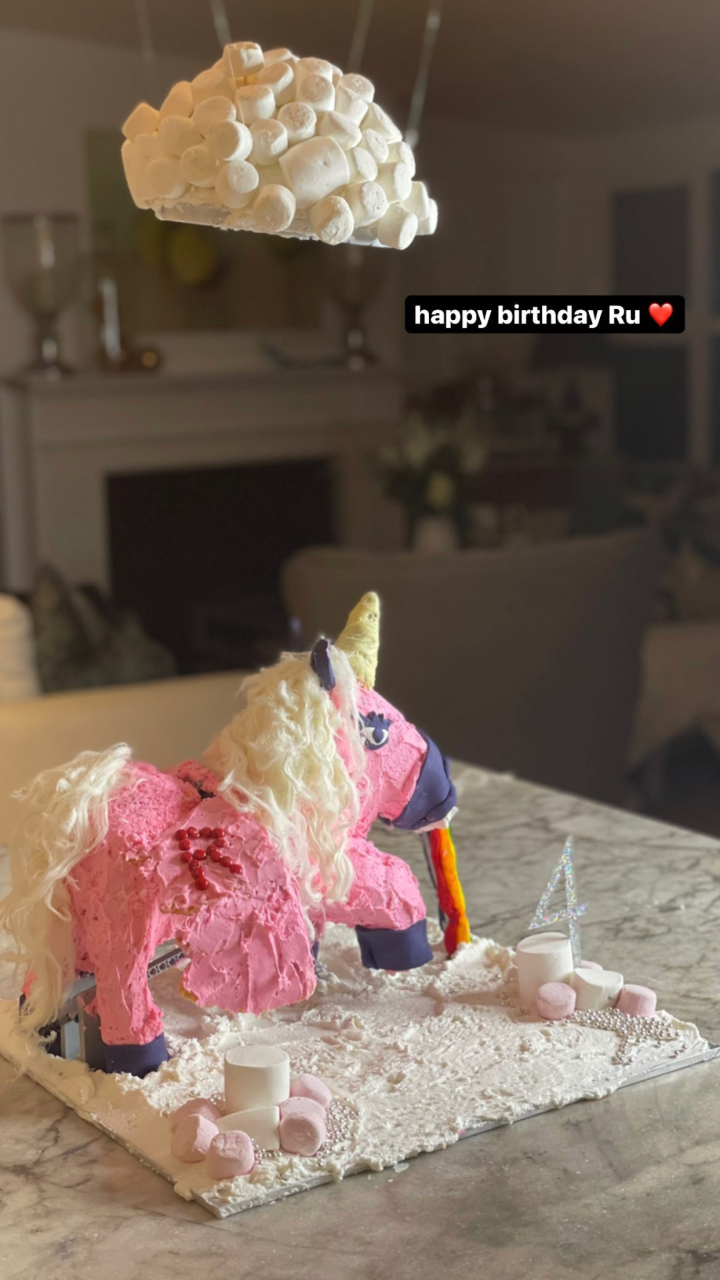 “She’s done. We aimed for a Unicorn. We landed at a UniDonkey,” he wrote in a final tribute at 4am.

“That’s the beauty of life sometimes, wouldn’t have wanted it any other way Welcome to the family, UniDonkey. We love you for you.”

“Having said that, we will maul you tomorrow. Goodnight friends.”

Hamish added that the cake took eight hours to make, which is a new record for him as far as the longest time to make a masterpiece. Previously, he made a Pikachu in a Pokéball cake for his son Sonny’s seventh birthday that ten-year-old me is madly jealous of. Oh, and who could forget the iconic and literally lit-up Cave of Wonders cake he did? Get this man on Celebrity MasterChef 2021, stat!

Honestly, since it’s looking like my birthday is gonna be another one spent in lockdown, can I pay Hamish Blake to make me a cake, too?

Back in January, Zoë Foster Blake and Hamish Blake made us wish we were adopted into the family when the pair and their kids moved from Melbourne to Sydney.