Call The Doc: Grey’s Anatomy’s Isaiah Washington Is Going Nuts On His Ex Co-Stars On Twitter

The early noughties were an iconic time for drama television as it spawned some of the most iconic shows including Desperate Housewives and Grey’s Anatomy.

But with both shows, what was just as (if not more) fascinating than the wild storylines was the even WILDER behind-the-scenes drama that transpired.

I won’t delve into the Desperate Housewives drama ‘cos that’s done and dusted (you can read all about it here though), but the Grey’s Anatomy drama is alive and well over on Twitter.

“This woman once proclaimed that I should ‘never’ be allowed to speak publicly again. The world agreed with her proclamation back then and protested for my job and my head in 65 languages. I wish I was on Twitter in 2007, because I will NEVER stop exercising my free speech,” he tweeted.

This woman once proclaimed that I should ‘never’ be allowed to speak publicly again. The world agreed with her proclamation back then and protested for my job and my head in 65 languages. I wish I was on Twitter in 2007, because I will NEVER stop exercising my free speech. pic.twitter.com/fQ6L1zfQRR

He went on to bash Chandra Wilson, who has portrayed the beloved Dr. Miranda Bailey from the show’s inception to the present day.

“Your opinions are your own, but you are a fool, a liberal and misguided feminist to even try and defend this woman,” Washington tweeted at a fan defending Heigl. “You weren’t there, so die on this hill, whoever you are. She could have cared less about her gay friend. Chandra Wilson knows all about that too.”

When another fan asked why he is dredging up the past, Washington added, “Because it’s the TRUTH. The End.” 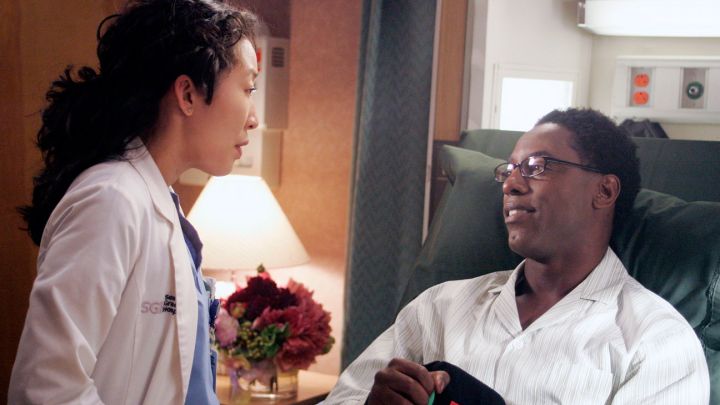 Back in October 2006, reports surfaced that Washington used a homophobic slur during a fight with Grey’s Anatomy frontman Patrick Dempsey (aka McDreamy).

T.R. Knight (Dr. George O’Malley) later revealed in January 2007 that hearing Washington use the word “f*ggot” encouraged him to come out as gay. Washington later denied using the slur at the Golden Globes, prompting Heigl to tell Access Hollywood that her then-costar “needs to just not speak in public, period.”

Months after the scandal first broke, ABC announced that Washington was not asked back for season 4 of Grey’s Anatomy. In July 2007, he admitted that he copped to using the word while arguing with Dempsey about being late to work.

It’s possible that his tweet storm is a retaliation to this but, like… that was literally 13 years ago. Where the eff is this coming from?

A source close to Heigl told Us Weekly that Heigl stands by her decision to have Knight’s back.

“Katherine stood up for her close friend twice when Isaiah publicly outed him and called him a f—–t. That’s hate talk, not free speech,” the insider said.

“She is proud that she stood up for him. Katherine is and always will be an advocate and ally to LGBTQ community.”