In between the absolute bedlam of carnage that was Game of Thrones‘ 9th episode for Season 6, ‘The Battle of the Bastards‘, one key character was notably absent: Ghost.

Jon Snow‘s (Kit Harrington) direwolf has fought by his side through pretty much every battle, but when the showdown between him and Ramsay Bolton (Iwan Rheon) at last came to pass, he literally lived up to his namesake. (Ghost / ghosted, GEDDIT?! )

It turns out that Ghosts’ absence on the battlefield was a fiscal decision rather than a character-driven one: ‘Game of Thrones’ producers simply couldn’t swing the budget.

“[Ghost] was in there in spades originally, but it’s also an incredibly time consuming and expensive character to bring to life,” the episode’s director Miguel Sapochnik told Business Insider.

“Ultimately we had to choose between Wun Wun and the direwolf, so the dog bit the dust.”

Wun Wun, if you’re not ~overly familiar~ with each character’s name, house, and detailed genealogy, was the giant who was absolutely critical to Jon’s success in winning the battle and beating Ramsay’s face into a bloodied mulch. 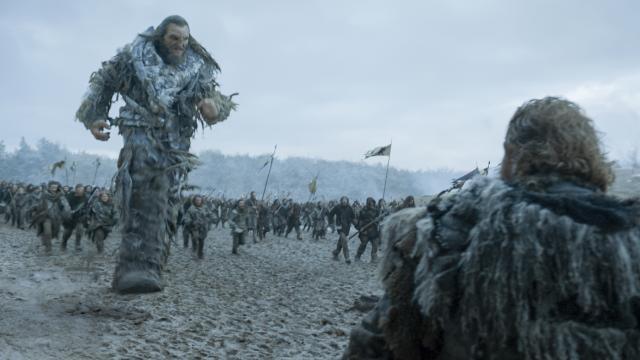 “Anything with the giant is a challenge, because he’s not there, and you have to shoot multiple layers for each shot, and get extras to react to something that doesn’t exist, and then shoot the actual giant played by Ian Wright months later on a green screen stage,” said Sapochnik.

Not to mention that BI estimates the episode – which shot for 25 days and included 600 crew members, 50 extras, 70 horses and 25 stuntmen – cost anywhere between $11 million and $25 million, so good call well made.

And because of Wun Wun, the Starks are back in Winterfell.

Even if one of them (Rickon Stark, played by Art Parkinson) didn’t quite make it.

Had a good run #shouldazigzagged

MORE ABOUT THAT MOSTER EPISODE: