Georgia Love, former Bachelorette – the only one to still be happily coupled with her chosen beau, Lee Elliott – and reporter at TEN Eyewitness News Melbourne, had a frankly bonkers-looking musical theatre-themed 30th birthday party over the weekend at the Regent Theatre in Melbourne.

Fucking look at this:

At the end of the day you’re another day older????⁣???? ⁣ Satine-inspired couture gloriousness by @oglialorocouture ⁣ Styled by @lanawilkinson ⁣ Hair by @marieuva ⁣ Makeup by @jade__kmakeup ⁣ Smile by all my favourite people dressing up and coming together in the one room (and that room just happening to be the Regent Theatre) ????⁣ #G❤️30 #thirtyhappens #thirtyisthenewblack #extraaf #imliketinkerbellineedapplausetolive #thegreatestthingyoulleverlearnisjusttoloveandbelovedinreturn

Love wore a “Satine-inspired” leotard and fishnets in an homage to the role played by Nicole Kidman in Baz Luhrmann‘s 2001 sensory overload Moulin Rouge!, while bae dressed as the titular character from Beauty and the Beast, making the logical connection to their former lives as reality TV stars: “You did lock me up in a house with strange characters, made me fight for your love and, of course, you had a magical rose!“

Comedian and TV personality Joel Creasey was there too, dressing as one of the von Trapp children, along with model Jack Stratton Smith and actor Alex Given, who just finished up a stint as part of the ensemble for The Boy from Oz at Arts Centre Melbourne. Comedian and podcaster Thomas John Jaspers came as their governess, a problem called Maria.

When the invite says “musical theatre theme”… well you can bet we are going to take it VERY seriously. It’s @georgiealove’s 30th tonight and we are going as Maria and the Von Trapps. Obviously I’m Gretl. Can’t wait to drink too much and start yelling out “WHAT IS IT YOU CAN’T FACE?”. Happy Birthday G!

READ MORE
PSA: Keira Maguire Might Be The Next Bachelorette & Pls God, Let It Happen

Here’s some more of her mates, influencers, the lot of ’em:

Can’t believe we missed the dress up memo…. Happy Birthday @georgiealove Thirty Happened and it was as fabulous as you are! #G❤️30

And evil takes a human form in Regina George. Don't be fooled, because she may seem like your typical selfish, back-stabbing, slut-faced ho-bag. But in reality, she is so much more than that. ???? HAPPY DIRTY 3️⃣0️⃣ @GEORGIEALOVE

The hills were alive

If you wanna see some more from the srsly lavish celebration, you can check out Elliott’s Insta Stories. They feature Lucy Durack, aka Glinda the Good Witch in the latest Australian run of Wicked, switching roles to sing ‘Somewhere Over the Rainbow‘ to the birthday girl. Also: two of Love’s rejected Bachelorette hopefuls, Cam Cranley and Clancy Ryan dressed as Gaston, the Beast‘s rival for Belle‘s affection (yeah, okay, that’s a good joke), and ‘Elder Clancy‘, a made-up Book of Mormon character.

When @georgiealove has a musical theatre themed 30th Birthday Party and you are in cahoots with @leeroyelliott and @joelcreasey (aka The Beast and Kurt Von Trapp) to surprise sing her Somewhere Over The Rainbow, there is only one thing to wear. Happy Birthday gorgeous George!! Xoxo ????❤️????

And for an insight into the day after, try Georgia Love’s Stories, which reveal that she had some excellent, musical-themed cookies from The Cookie Stories Co. for guests to munch on, themed around The Rocky Horror Show, Grease, Les Misérables and more. 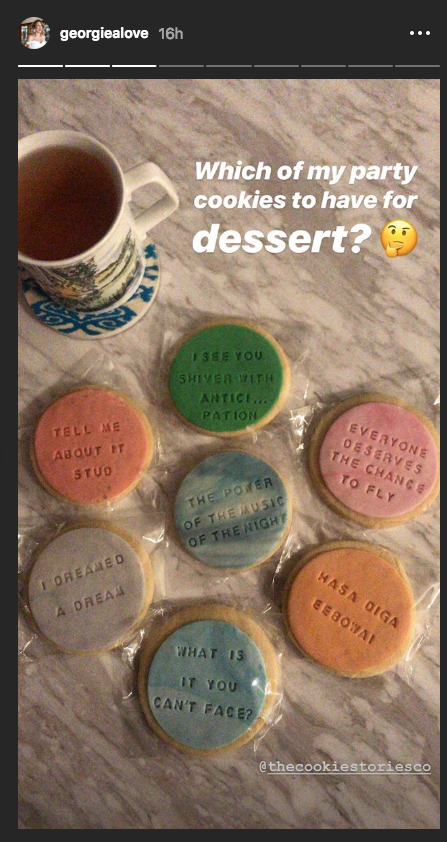 I’ve had the time of my life and I owe it all to you! ????????❤️ The first look at the most EPIC night of my whole life, celebrating my 30th in the only way I know possible: throwing a totally OTT musical theatre party at the Regent!! And of course it wouldn’t have been half as wonderful without my beast ❤️ A HUGE thanks to my kween @lanawilkinson and the magnificent Sam from @oglialorocouture for making me the Satine costume of my dreams ???????? Many many more highlights to come. I ain’t sorry ????????‍♀️ #thirtyhappens #glove30 #musicaltheatre #moulinrouge #beautyandthebeast #voulezvouscoucheravecmoi

That’s a party we would love to have copped an invite to (for the cookies).

READ MORE
Vanessa Sunshine's Not Opposed To Being The Next Aussie Bachelorette, You Guys