We have a new Game of Thrones trailer, which feels like it’s 2019 all over again. (Ahhh, the before times.) It’s the first teaser for the prequel series House of the Dragon, set 200 years before the war of the seven kingdoms. The Targaryens sit on the Iron Throne, and there’s a decent cast ready to give this franchise another crack. Are we hyped yet?

Emma D’Arcy stars as Princess Rhaenyra Targaryen, the king’s first-born child and a bonafide dragonrider. Her uncle is fellow dragonrider Prince Daemon Targaryen (Matt Smith), the younger brother to King Viserys and heir to the throne. It’s a blonde wig palooza in here.

“Dreams didn’t make us kings,” Smith’s Daemon says in the trailer. “Dragons did.”

Based on George R.R. Martin‘s 2018 book, Fire and Blood, House of the Dragon tells of a civil war between siblings Aegon II and Rhaenyra over the Iron Throne after the death of their father, Viserys I. The rest of Westeros got involved – including our old faves, House Stark and House Lannister – and by the end, dragons went extinct.

It also stars Steve Toussaint as Lord Corlys Velaryon a.k.a. ‘The Sea Snake’, a “famed nautical adventurer” from an ancient Valyrian bloodline who’s richer than the Lannisters; Rhys Ifans as Otto Hightower, the Hand of the King who sees Daemon Targaryen as the greatest threat to the thrown; and Olivia Cooke as Alicent Hightower, the Hand’s daughter and wife of King Viserys I Targaryen (and stepmother to Princess Rhaenyra).

Once again: we’re going to need a family tree to figure this shit out. 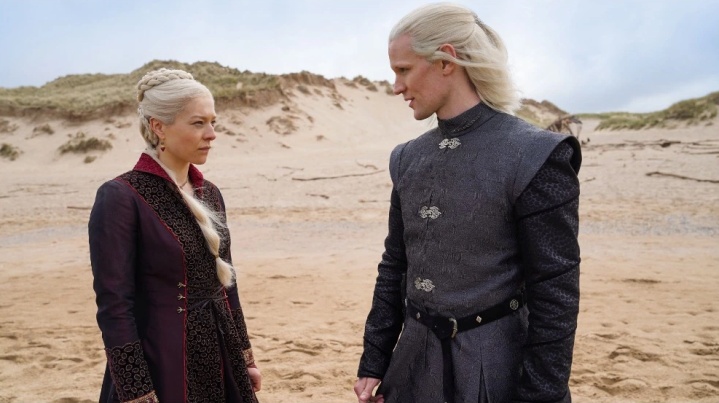 HBO dropped the first teaser overnight and it’s almost enough to make you forget how badly this franchise torched its legacy in the eighth season.

Adding to the hype is that Miguel Sapochnik, who directed some of Game of Thrones‘ best episodes (including ‘Battle of the Bastards’), is showrunner alongside co-creator Ryan Condal.

Cautiously optimistic about this one, which will probably develop into full-blown Thrones mania by the time it airs in 2022. See you and the one million fan theories then.