Tara Pavlovic, a woman you met on Matty J‘s season of The Bachelor, laughed with on Bachelor in Paradise, and then found out too much about in the wake of her split with Sam Cochrane.

Her and her ex-fiancé split acrimoniously earlier this year, Cochrane accusing Pavlovic of physical abuse, while she described him as “emotionally abusive“.

Pavlovic decided this week to lay into the ‘reality’ part of reality TV shows, while watching The Bachelorette, and more specifically the moment when Ivan Krslovic, a dancer after Ali Oetjen‘s heart, seemingly tried to blend two full avocados: pit, skin and all.

Did you miss that?

The only consequence, rather than the expected one where you know the pit breaks the fkn blender, was that the avocado mousse he made for dessert ended up no good. It may or may not have contributed to Oetjen’s decision to turf him out of the competition.

Well, Pavlovic thinks the avos in a blender are a good metaphor for reality TV. In an Instagram Story she wrote:

I have been trying to find a way to describe how real reality TV is for about 10 months now.

I have struggled, but I have now found the perfect description…

It’s about as real as two whole avocados being blended whole in a blender and nothing at all going wrong. 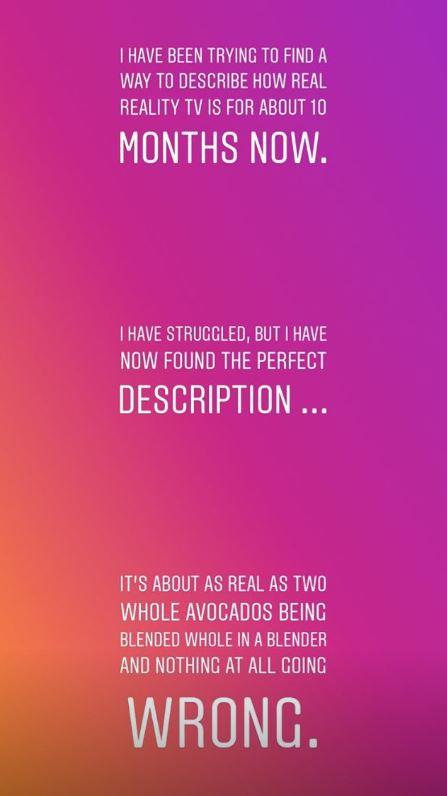 I just read the instructions that said ‘Two avocados in the blender’ so that’s exactly what I did. I wasn’t really thinking… I’d never cut an avocado before, so [I read] ‘Put two avocados in a blender’, I saw the avocados, and just popped them in.

It’s not the first time Pavlovic has pointed to dodgy editing on reality dating shows. During Matty J’s hometown visit last year, it looked like her brother Troy called the Bachelor a ‘liar’, when he said, “I wish I could tell you right now if I was gonna end up with Tara… or not. At the moment, I don’t know the answer to that question.“

Not so according to Pavlovic, tagging the post #cleverediting, and adding in the comments:

That’s not how it was. That was clever editing…

It was a happy conversation. Troy said liar to a whole other conversation about one of Matty’s tattoos. I feel terrible that people think Troy would have ruined it for me – he was nothing but nice.

Nothing but laughs and happiness with these guys… So grateful I get to call these people my family. Believe it or not, Troy is actually super nice ???? #cleverediting #goeasycroey

READ MORE
'Bachie' Fans Unite To Ask The Simple Question Of "Who The Fuck Is Daniel?"

Pavlovic does make a point, both times – it just doesn’t seem possible that the worst thing to happen with the avos was a kinda gross-tasting dessert. And we all should be aware that what The Bachelor(ette) in Paradise serves us is a very particularly cut together dish, that takes out some of the good stuff, and rearranges some of the bad to form a narrative.

Still watching it religiously though…