Florence Pugh has cemented herself as a heckle queen, managing to destroy a decade’s worth of Scarlett Johansson‘s work by taking the absolute piss out of it.

The duo are starring in Marvel’s Black Widow, the long-awaited movie about the least known Avenger, Natasha Romanoff (Johansson), a.k.a. Black Widow.

Florence Pugh stars as Yelena Belova, Natasha’s younger sister and herself a trained assassin. Their on-screen relationship is a complete and total delight to watch, particularly for anyone who’s grown up with a sister. Florence is the bratty younger sibling to Scarlett’s famous and world weary one, both dealing with traumas and trying to find a family when theirs have been ripped away.

However, in true sister fashion, Florence’s Yelena endlessly teases Natasha over her iconic ‘Avengers pose’. You know the one: it’s hot fierce, it’s fierce, and as it turns out, it’s entirely impractical. 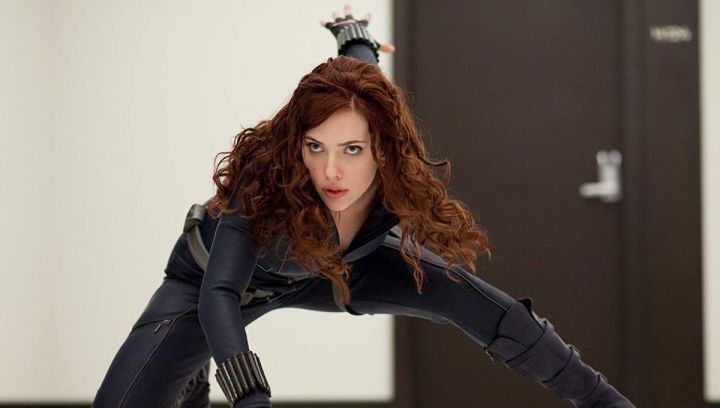 “Sadly, as Scarlett will say, she did 10 years of work, and I came in and ruined it,” Florence told PEDESTRIAN.TV via Zoom.

The riff on the Black Widow pose was written into the movie after Florence discovered the pose, if used in real life, would break every bone in your body.

“I was in the stunts warehouse and they were like, ‘You know, Flo, now that you’re this character, you’re gonna have to come up with a pose’,” she said.

“And I was like, ‘Yeah, but like, what is Scarlett’s pose? Like, surely that would hurt when she lands, if she was actually landing from a height’. And they were like, ‘Oh, yeah, if you actually land like that, you’d break your back, you’d break your knees’. And I was like, ‘Oh, my goodness, does Scarlett know that her pose would have her broken?’.

“So on set one day, I was getting in the pose, and I was like, ‘Scarlett, you know, when you do this – like, this is super dangerous. I mean, what is this pose?’ And Eric Pearson, the writer, was in hysterics. And Scarlett was just like, ‘I can’t believe you’re taking the piss out of this thing that I have created and made’. And Eric was just basically taking notes in the corner, and he was like, ‘Oh, yeah, that’s going in the film’.

“So this really wonderful thing of me actually taking the piss out of Scarlett Johansson’s pose actually made it into the film, which is why whenever I do it, she’s always got this little smirk on her face, which I love.”

The two of them had an “amazing connection”, Florence said, which seeped into film and made their on-screen relationship “blossom in ways that weren’t originally there”.

“And as Scarlett has said previously, you never know … if you’re going to have good chemistry,” she said.

“Lots of the love and the jokes and the tenderness that you see, was just over, I suppose a film’s worth of time of us really, actually being together and hanging out together.”

It’s hard to imagine Florence Pugh having bad chemistry with anyone. Some celebs stiffen up in press interviews, while others turn the full force of their charm on you – for a couple of minutes. With Florence, she comes across exactly how you’d hope: the down-to-earth big (or little) sister who’ll drag you to the pub and make you snort beer out your nose.

A big part of that is her unfiltered posting on Instagram, which mixes acne selfies and vibey playlists with the glamorous perks of being a 25-year-old Oscar nominee and industry darling. (Talent, beauty and charm? It doesn’t feel fair, except that if anyone feels like they deserve it, it’s Florence.)

“For me, it’s important to show both sides of my life,” she said.

“There’s a very wonderful, exciting glamorous side where I work with my team – like today – and we make all of these amazing artistic choices, and I go in fantastic dresses to fantastic places. And then there’s also another side, which is very normal. And I think sometimes that side gets forgotten.”

Even when she’s showing the glam side, there’s a relatable side that makes her a new kind of celeb. She might be front row at Dior, but she’s taking her mum; she might be glammed up for Black Widow‘s press day, but she’s making a political statement (by artist Joy Yamusangie) on donated denim (by sustainable brand Jeanerica).

However, there’s parts of her life she keeps private, and although we don’t get into it, it feels like one of those parts is her relationship with former Scrubs star Zach Braff, 46. The couple have been together for years and share a dog and a home together, but he’s rarely seen on her Instagram, and when their relationship does make it to the grid, the comments are turned off. (It comes after an incident last year, when her birthday tribute to Zach was flooded with comments about their 21-year age gap.)

“I don’t think I’m open about everything,” she said.

“I do have lines. I think it’s really important that you you make a distinct point about what you’re willing to share and what you’re not.”

Even with those limits, it’s a stark contrast to, say, Emma Stone or Jennifer Lawrence, neither of whom have Instagram, or even Margot Robbie (who just quit hers). Florence Pugh posts like your favourite content creator / influencer, inviting you into her world and letting you experience the cool (and uncool) parts of her life.

“I think the way that Instagram is set up is that it shows an ideal life,” she said.

“And we all know that those aren’t the moments that that happen every single day. I found it incredibly important to just be a bit more honest and open and show the normality of life, as well as the wonderful things.”

She pauses for a split second. “I enjoy that as well, because I like being genuine and I don’t like being anything other than what I loudly am. I think I’d probably go mad if I couldn’t do that.”

Black Widow opens in Australian cinemas on July 8, and comes to Disney+ on July 9.