André Aciman‘s Find Me is a true gem, but, holy shit, did it transport me back to the same quivering mess that I was at the end of Call Me By Your Name.

Set several years on from (most of) Call Me By Your Name‘s epilogue, Find Me follows the lives of Elio, his father Samuel and Oliver as they seek to move on from that pivotal summer yet ultimately discover that time may not heal all wounds, after all.

Anyway, I digress, please, sit back and enjoy this Find Me TL;DR filled with more age-gap romances, lots of seks and eventual, hard-earned, long-awaited reunions.

Okay, so this chapter is from the perspective of Samuel, Elio’s father, and doesn’t really discuss Elio or Oliver that much, so we’re just going to speed through this as quick as possible, okay? (Sorry, I’m an Elio/Oliver stan, through and through.)

So, 10 years on from the OG peach fucking, Samuel is on a train from Florence to Rome to visit Elio, who’s now a successful pianist. Samuel and Elio’s mother, Annella, are now divorced – she left Samuel for his best mate. Samuel doesn’t really mind, though, as the love had already gone. They all actually remain good friends, and Annella cares about Samuel’s happiness. Happy days.

On the train, Samuel meets a young girl named Miranda and they instantly hit it off. (What is it with this story and age-gap romances? I swear…) Anyway, they form an instant bond – Samuel’s super self-conscious about being the ‘old guy’, but Miranda brings the youth back out of him.

They hop off the train in Rome and hop onto each other (in the sack). After 24 hours of intense romping, and, like, hardcore romping, they meet Elio. The three of them walk around for the afternoon and Elio eventually takes them to a spot that him and (wait for it) Oliver (*hot flushes*) once visited while drunk.

Elio gives Samuel and Miranda his blessing. “You said it to me once years ago,” he tells his father, “now it’s my turn: I envy the two of you. Please don’t ruin it.” EEP.

Samuel and Miranda then talk about going to Samuel’s place in Florence, where there’s an abundance of fresh –  you guessed it –  peaches. (*Giddy school girls squeals*)

15 years on from the OG peach fucking, Elio now lives in Paris.

He meets this dude called Michel at a concert. Michel’s almost twice his age – Michel even mentions that he reminds Elio of his son (????) –  but we move past this rather quickly and they begin an intense, passionate relationship. Lots of fucking. Lots. Love that for them.

After 3 weeks of sexy time together, Elio tells Michel that he’s heading to the US to play the piano and wants to see Oliver. Elio adds that Michel reminds him of Oliver, but both Elio and Michel know that he could never be him.

“You have given me the days that justify the years I’ve been without him,” Oliver tells Michel. (This line – like a punch in the dick – had me balled over in foetal position, sobbing.)

The old chap, although evidently heartbroken, understands that he’s not the one for Elio. Michel tells Elio that he just wants him to be happy.

This entire chapter takes place at Oliver and his wife Micol’s apartment, 20 years on from the OG peach fucking.

Elio and Oliver had met up 5 years prior, when Elio was in the States, but it was a super unsatisfying visit and they’d mainly just talked about their fantasies without acting upon them.

Oliver is now a college professor coming to the end of his sabbatical in New York. Oliver and Micol are just about to head back to their normal life in New England. They also have two sons, who are away in school.

The married couple decides to throw a lil’ soirée before they officially depart. Oliver invites two young people that he low-key wants to fuck – Erica and Paul. He met Paul at university and Erica at yoga class. The two potential suitors rock up with their own respective partners, and Oliver’s just super stoked that they’re there. The trio form a camaraderie and get drunk and Oliver fantasises about boinking them. Yay.

Near the end of the party, Paul starts playing the piano and that’s enough to entrance Oliver – the particular tune reminds him of Elio. “This same Arioso was what I’d heard played for me some twenty years before when, then too, I was the one departing.” (Shivers.)

At the end of the night, when he’s bloody sloshed, he fantasises about returning to Europe to see Elio.

“I need to go back, Micol,” he also imagines telling his wife.
“Why?”
“Because my life stopped there.” 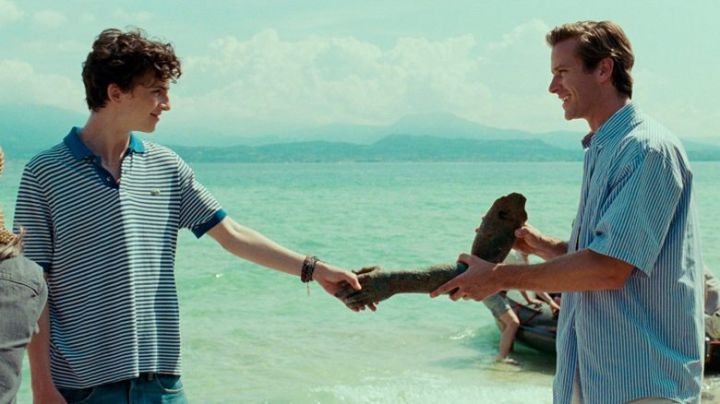 (I’m not crying, there’s just dust in the office.)

Elio and Oliver are finally together, and it only took 249 pages to get there. *nervous laughter* *eye twitch* It’s fucking happened.

Oliver comes to visit Elio in Italy and assures him that, this time, he won’t be leaving. They’re back living in the OG house where it all began – with Elio’s mother and her caregiver.

Miranda and Samuel had a son together, Little Ollie (yes, big awww), but Samuel has since passed away (not so big awww). Subsequently, Miranda and Little Ollie now live with the clan in the Italian house, too.

The first time Elio and Oliver have sexy time is rather awkward because Oliver understandably hasn’t made love to a dude in a while, but they quickly get over that hurdle and board a 1-way flight to Pound Town™ like no time has passed at all.

One morning, Oliver and Elio have this beautiful moment with Little Ollie, where Little Ollie acknowledges that he’s named after Oliver and the lovers then low-key acknowledge that Little Ollie is their adopted son. “This child was our child,” Elio narrates. “The two of us knew it. And my father, who no longer was alive, knew it just as well, had known all along.” If you weren’t crying already, you are now.

In regards to why they never reached out to each other sooner, Elio concludes:

“He knew that though neither of us sought out the other it was only because we had never really parted and that, regardless of where we were, who we were with, and whatever stood in our way, all he needed when the time was right was simply to come and find me.”

Although it’s a stunning ending, with the two reunited and without any intentions to depart one another again, I still finished Find Me in a blubbering mess. I think it’s because I’d become so invested in the Oliver/Elio narrative over the past couple of years, and getting to this resolute ending had involved feeling a lot of feelings.

Either way, Find Me will have you longing for that random cashier you locked eyes with 5 years ago. You’ve been warned.