Like any Wes Anderson fan (Rushmore is in my all-time Top 10 Movies) I was very much looking forward to Moonrise Kingdom. From the first trailer it was quite clear the movie had a lot of Anderson’s signature touches: the beautiful, gauzy golden hues and organic-looking palette of primary colours; a fantastic ensemble cast with a handful of regulars (Bill Murray, Jason Schwartzman); a narrative core comprising social outsiders on some sort of quest for belonging; family dysfunction and a melancholic sense of nostalgia also thrown into the mix.

The outsiders in Moonrise Kingdom are 12-year-old soul mates Sam (Jared Gilman), a bespectacled orphan with a gift for scouting, and Suzy (Kara Hayward) a bookish loner in blue eyeshadow.

The two are quickly drawn to each other when they meet at a school pageant, immediately recognising a kindred spirit. Over pen pal exchanges the pair conspire to run away. With the aid of Sam’s handy scout skills the twosome easily flee their New England home town for a pine-covered island, causing the local folks to form a search party as a wild storm is brewing.

The adult cast members take off after the pair, including Suzy’s parents (Frances McDormand and Bill Murray), the police captain (Bruce Willis), and scout master (Edward Norton); while Suzy and Sam continue the journey through the forest to find their paradise.

During their romantic quest we quickly come to realise there’s more to Suzy and Sam’s eccentricities than just typical pre-teen shyness. Suzy reveals that she has discovered a pamphlet called “Coping with a Troubled Child” in her parents bedroom. Later Sam casually mentions he might wet the bed. It’s also revealed they’ve both had a history of aggressive physical outbursts.

Mental illness is a major theme in this film (the screenplay was written by Anderson and Roman Coppola). There are no well-adjusted or naturally happy-seeming characters, every one of them is deeply unhappy for various individual reasons. While the seriousness of the characters’ depression is diffused through the sweet scenes of kids camping and the whimsical touches, this is arguably Anderson’s darkest movie yet.

The child actors in the lead roles Gilman and Hayward are terrific. While shuffling around each other carefully as the romance develops, the performances are soulful and earnest and heartbreaking and funny. It’s a shame, then, that some of the grown up actors were disappointingly under used. Bill Murray is given very little to work with which is a waste, and brief cameos by two fantastic actors Tilda Swinton and Harvey Keitel really add nothing to the story at all, although Jason Schwartzman is great in his brief but critical part.

Like all Anderson movies the movie looks gorgeous. His obsessive approach to shot composition, framing and lighting makes Moonrise Kingdom a pleasure to feast your eyes on, and the use of music – particularly the compositions of Benjamin Britten – is as effective as ever.

Moonrise Kingdom is a sweet but disturbing love story about a pair of outsiders who find solace in each other in their attempts to escape the gloom of Wes Anderson’s vision of reality – the adult world. But it’s also a rather beguiling world, and one that’s certainly worth visiting.

Moonrise Kingdom is in cinemas August 30. 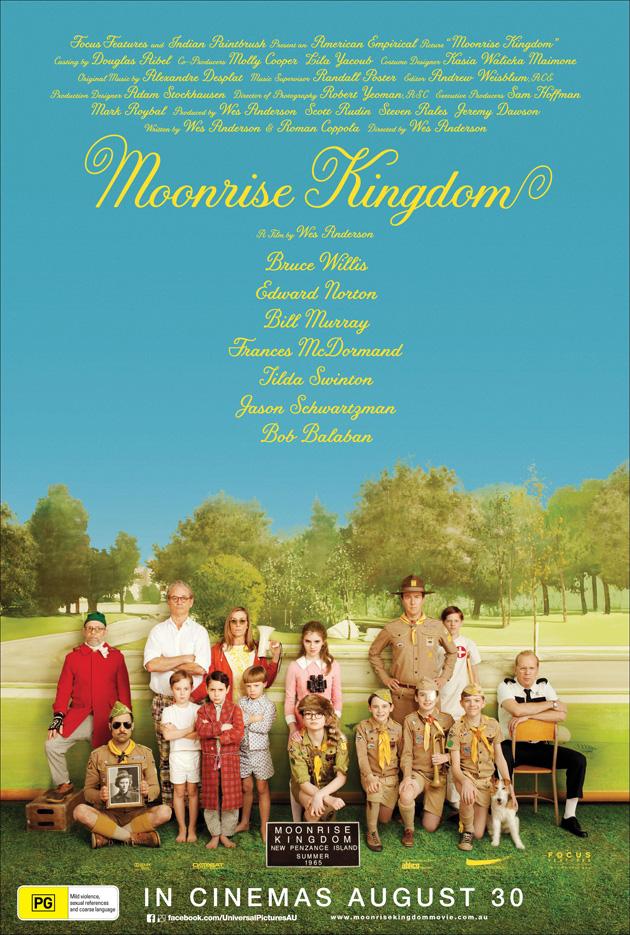