FARMER RECAP: That Is *Not* The Happily Ever After I Was Expecting

Shed a tear because tonight is the final episode of Farmer Wants A Wife 2020 and holy shit, I cannot stress enough just how fucking wild it was.

Usually I’d say grab a wine but I think tonight’s episode calls for half a bottle of tequila because this was some absolute madness.

Before we get started, you’re going to want to refresh yourself on where all the farmers started their journey because I’m warning you now, this episode has more tea than the whole season combined.

Last night’s episode saw Neil and Justine, Nick and Liz, and Harry and Stacey find their happily ever after, while poor Alex was left sitting in Caesar’s Fucking Palace alone after Henrietta decided she was done with his shit. It was wild.

READ MORE
FARMER RECAP: Okay But What The Fuck Sort Of Cliffhanger Was That?

But if you thought this show was going to produce five solid, loving relationships, you are *sorely* mistaken, my friend.

Before the reunion, our last remaining farmer Alex had to choose his lucky lady.

After much anticipation, Henrietta actually *did* show up to the rejection ceremony and apologised for how she walked out last night. Look, I know lots of people online don’t love her but I think this speaks volumes about who she is as a woman and I stan her SO hard.

Obviously, he chose Jess. There’s no surprises there, we all knew it was coming.

“Im scared that she’d hurt me,” he said about Henrietta.

To be honest, I think Jess is the girl who will love him for who he is, and that’s totally great. But I think if he had chosen Henrietta, she would’ve pushed him to be a better version of himself. Obviously, it’s not a woman’s job to better a man but I think if Alex had the guts to take a chance on Henrietta he would be a better man for it.

His speech to Henrietta was an absolute disaster and honestly, he should’ve just eaten his own foot because this man is not particularly good with words. Sorry, Alex, but you’re just not.

To be honest, I think he knows Henrietta is the one who truly had his heart but Jess just made more sense. It’s a typical case of who has your heart vs who has your head. Jess is going to fit in to farm life perfectly and probably be a really easy relationship, but I think Henrietta (while that relationship would take more work) would actually be a more emotionally fulfilling relationship long-term.

But now to the real tea… The reunion.

Let me just preface this by saying this is the first season I’ve ever watched of FWAW, so I was wholeheartedly expecting them to all be married with seven kids and a pet goat named Billy by now, just judging off my own country town experience. But hoo boy, I was wrong.

For starters, Sam is here. In case you missed it, he left mid-season after the tragic death of his Nonno and the girls all deciding they didn’t see a future with him. It was a huge thing, but you can read that recap here.

READ MORE
FARMER RECAP: A Shock Exit & A Whole Bunch Of Shitty Behaviour That We Need To Discuss

First up, Neil tells Nat about his time since the finale. He tells us that he’s gotten into a serious car crash (which is terrifying considering the story he told us of his first love dying in a car crash next to him). It’s really sad, but then he tells us that him and Justine are still together and actually sound really bloody strong.

They’re still doing long-distance because, you know, they’re adults. But she came to care for him after his accident and all in all, they’re doing well. I predicted this relationship from the start, so I’m going to give myself a pat on the back.

I wasn’t quite sure why he even showed up but as luck would have it, he’s actually fallen for a girl who slid into his DMs during the show and now they’re all smitten and cute. Her name is Kirsten, she has an exotic-sounding accent that I can’t quite put my finger on, she’s absolutely stunning and seems really happy with him.

Oh, and she’s met his mum. Nat acts surprised by this but let’s be real, that is some serious first date Sam energy.

The first two stories are some serious happily ever after bullshit, but if you thought it was all sunshine and rainbows, think again.

The next cab off the rank is Nick, who started out as my favourite farmer but quickly served me serious middle-aged fuckboy vibes and dropped to the bottom.

It was just last night that I said I didn’t really like him but I hope for Liz’s sake that he treats her well and she’s happy.

Well folks, I’m here to burst that bubble because he’s already dumped her.

“I don’t think she’s the girl for me, forever,” he told Nat.

Basically, Liz reckons as soon as filming stopped, Nick stopped giving a shit and honestly, I’m not surprised. But to make matters worse, when she called him out on it in what was seemingly an attempt to salvage the relationship and act like the adults they are, he flaked.

“Its best to cut it off now than have things be difficult in the future,” he said, which is literally the biggest cop out in history.

Considering none of these men are particularly young, it’s really bloody disappointing to see that none of them really want to put in any work to make a relationship last. Love shouldn’t be a chore, but if you’re going to nourish a healthy, thriving relationship, it takes some effort, especially when things are hard.

Liz, wherever you are, I hope you are *THRIVING*.

Aaaaand then there’s our saving grace Harry, or so I thought.

Unfortunately, Harry and Stacey have split. It’s sad but I don’t hate either of them for it.

Harry is so mature and apologises if he’s hurt her but just wanted to take things much slower than she did. To be honest, I’m not surprised because she’s literally been mentally committed to him for twice as long as he has to her.

He doesn’t seem like a bad dude at all, I just don’t think he’s ready to drop his walls and instantly say “I love you”, which seems to be more of Stacey’s vibe (and there’s nothing wrong with that).

Meanwhile, Sam’s girl is just awkwardly sitting there like what the fuck is happening.

Aaaaand finally we’ve got Alex, who is our last hope for a happily ever after.

For starters, beard Alex is hot. I approve of this message.

We cop some sweet flashbacks of him and Jess but then he basically friendzones her.

You can literally pinpoint the moment Nat realises this show definitely isn’t getting renewed for another season after this many failed relationships.

He says he’s seeing someone.

I was right all along! Henrietta and Alex *are* meant to be.

Basically, after things went south with Jess, he reached out to Henrietta. At first they just caught up as friends but that eventually blossomed into an adorable relationship.

Meanwhile, Harry is sitting there like wtf, can he do that?

Henrietta absolutely gushes over how happy she is with him and how he’s finally opening up to her about his feelings and UGH! I just love this so much. 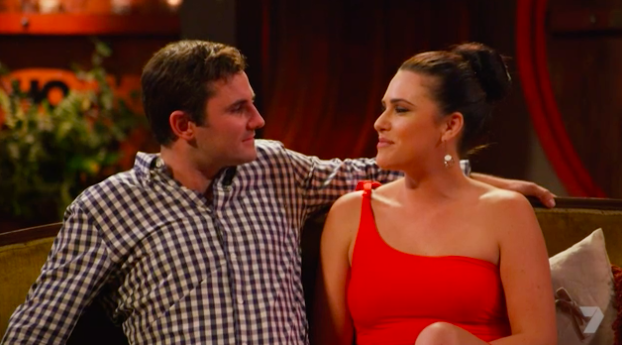 So all in all, we ended up with three relationships. Sure, only one of them was the farmer’s final pick and one was a total stranger we’ve never even heard of, but those odds are pretty solid.