FARMER RECAP: All Of These Men Need Therapists, Not Wives

Well, well, well, if it isn’t me back with another Farmer Wants A Wife recap and hoo boy, I’ve got some bloody THOUGHTS tonight. So sit down, buckle up and let’s get ready to roast some farmers.

I called it in episode one, farmers really aren’t all they’re cracked up to be. They can be just as big of a fuck boy as a city bloke, but they usually have worse hygiene and make you wrangle cows and shit. No thank you.

And as it turns out, tonight’s episode proved that the girls have finally caught on to the fact that these men truly ain’t shit.

We open with Sarah finally telling Alex about her no sex before marriage pledge.

Although I personally don’t believe in it because the thought of marrying someone who’s shit in bed is nightmare-inducing for me, I have heaps of respect for her for sticking true to her beliefs and telling him straight-up that his peen isn’t going anywhere near her without a ring on her finger.

He gave us this weird speech about how he’s *definitely* done the sex but if she’s cool with that, he doesn’t have a problem with her no sex pledge.

“Just so we’re clear, I’ve had sex before this,” he says.

TBH, if you have to tell people you’ve had sex, I have doubts that you *actually* have, but for the sake of the show, let’s just believe him.

The whole situation was way less dramatic than I expected, but back on his farm, the other girls are having a big ol’ bitch sesh about how they’re sick of him not sending anyone home.

Considering there’s some girl named Brittany, who has had 0.2 seconds of air time all season, still here, you’d think he’d have the balls to at least cut somebody loose.

Meanwhile, Sam (who I’ve said from day 1 radiates ~bad vibes~) takes Riley on a horse riding date. It’s nice, but his mum isn’t there, which is usually a sign he doesn’t see marriage in the picture with her.

As it turns out, my suspicions were right because he gives us a weird speech about his feelings towards the other girls, then effectively friendzones the shit out of her. Riley, my girl, get up and walk away. This man is not worth your time.

Over on Neil’s farm, he feels like he’s put out last night’s fires and treats Justine to a lawn bowls date, which is exactly as boring as it sounds.

But back on the farm, Megan and Karissa are secretly plotting their murders, I assume.

Harry finally takes Ashleigh on a date to the pub, they have a few beers, she opens up about her dad’s passing and its a really nice moment. Although they seem to be good friends, I don’t think they’re going to last. Sorry Ash.

Further south in Tasmania, Nick *finally* takes Naomi out on a date, in which he asks her how she plans on contributing to *his* business. I’m sorry, is this a first date or a job interview, Nick, GOD?!

But Naomi proves that she’s a strong, independent woman who can make her own money. Honestly, at this point I reckon she should just walk out. She’s too good for him.

All of the girls finally meet his mum, at an appropriate time (unlike Sam). It goes pretty well, she doesn’t seem like a crazy woman, so I guess she’d be fine to work with at the winery.

Back on Sam’s farm, Riley struggles to come to terms with being friendzoned and prepares to be eliminated. Notably, she doesn’t just walk the fuck out, she waits for him to *maybe* send her packing. No, girl, WALK AWAY.

But it’s not just Riley who’s preparing to leave, series favourite Emily also looks like she’s ready to walk the fuck away from the Italian Stallion and self-yeet out of the competition. But more on that later.

Over on Neil’s farm, he’s gathered around the fire with the girls in what looks like a scene straight out of Wolf Creek (John Jarratt, where you at boo?)

All of the girls look like they want to harvest his organs and go halvsies in the farm, even Justine is done with his shit.

He gives us this big speech about how he hasn’t really got a connection with Megan like he does with the other two, basically makes her feel like utter garbage but decides *NOT* to send her home.

Neil, my dude, what the absolute FUCK?!

As you’d expect, considering his girls are a little older and more mature, they all give him an absolute rinsing for this. At this point, we’re more than half way through the competition, if he’s not going to choose somebody, they should all just leave.

This goes for all of the farmers to be quite honest. Each and every girl on this show brings such a different energy to the table, and after this long, Neil should at least have a rough idea who definitely isn’t ~the one~. Keeping them all hanging on a leash is ridiculous and I hate hate hate hate HATE H A T E it.

Interestingly, he also gets quite snappy and defensive when they call him out on his bullshit. It’s gross and I don’t like it. At this point I don’t think any of the girls deserve this. They should all bounce.

But it looks like the roasting of the farmers isn’t exclusive to Neil’s farm because Alex is copping a serve on his farm too.

Again, all of his girls (except Brittany, who I have still never heard of) bring such different energy to the table and we know this. It’s pretty obvious at this point that it’ll either be Jess or Henrietta, so send the other two home and let them move the fuck on with their lives.

Henrietta even calls him out, saying exactly what we’re all thinking.

“Let’s not hang out as some weird girl/boy band,” she says.

He then gives us a big sob story about how his parents got divorced and it was really hard on him. And look, I feel for the bloke. That’s really shit, but it happened when you were nine, you’re now 28. If you’re not going to see a therapist about it, don’t drag four girls through the mud while you sort out your commitment issues. 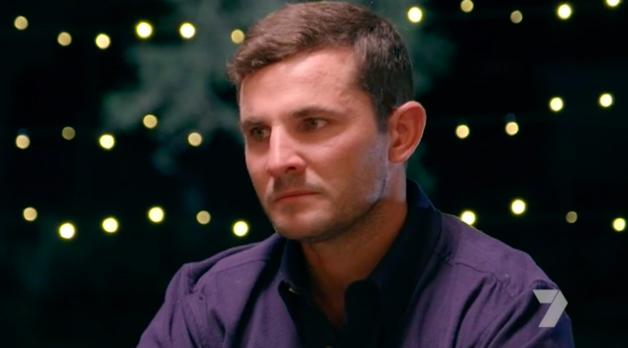 Okay at this point I’ve decided I literally hate all of the farmers (except *maybe* Harry).

Back in Tassie, Nick tells the girls he isn’t sending anyone home. Again, ridiculous.

Naomi rolls her eyes, Liz literally yells “oh my god” and they collectively roast him. They call him out on not sending Marnie home earlier despite clearly knowing there was no connection and he gives some bullshit answer about wanting to have fun with everyone as long as he could.

Sorry, my fuckboy detector is literally off the charts right now.

But alas, nobody leaves.

Seriously, why are they not forced to boot somebody every week like The Bachelor?! I hate it. None of these men are ready for commitment, they all just need a live-in cleaner and a fucking therapist.

Thankfully, Harry actually does the right thing and makes a decision.

After careful consideration, he realises that it’s really between Stacey and Madison here and chooses to send Ash home. It’s sad but I think it’s admirable that he made the decision and didn’t waste any more of her time than he needed to reach his decision. At this point, he’s the only one who actually seems like he could handle a relationship.

Back on Alex’s farm, we made a smidge of progress because he pulls Brittany aside, has a bit of a chat and *finally* sends her home. It’s a little bit of progress but honestly, we haven’t seen her all season, she should’ve been set free weeks ago.

She cries, it’s super emotional but she knows it’s for the best.

Okay, okay, okay, we’re back on Sam’s farm and the Emily bomb is about to detonate.

She pulls him aside and basically says she’s not feeling it. Honestly, I don’t blame her because she’s way too good for him. But weirdly, she doesn’t self-yeet and leaves him with the power here.

But just when you think he’s going to get rid of them both and focus on Sophie (aka the only girl who actually likes him), he decides not to send ANYONE home.

He literally says he’s got one girl who doesn’t like him and one who he doesn’t like, but he chooses to keep them both?!

Seriously, did they not have a screening process to make sure the farmers were actually, you know, ready for a wife?!

Harry: Stacey or Madison. They both bring different things to the table and either could win it, it really just depends which sort of future he wants.

The rest of them: I hope all of the girls leave because this whole “I’m not sending anyone home” nonsense is getting really old and these girls are having their time wasted.

Lavender Baj is the Arvo/Nights Writer at Pedestrian. She posts thirst traps and dog pics on Instagram and tweets every bat-shit thought she ever has on Twitter.