Call me a skeptic, call me a bitter binch, call me a conspiracy theorist, I don’t care. But you simply cannot convince me that a lot of celebrity couples aren’t fake PR bullshit.

As a seasoned entertainment guru, I’ve witnessed so many famous folks get into a relationship then follow the same old patterns. It’s almost formulaic… as if their relationship was plotted by their PR agents rather than by Cupid himself.

And that’s because, in my not-so-humble opinion, most of them are plotted by PR agents. And there are so many telltale signs that give away the fact that celeb couples are BS that you’ll almost feel like a fool for believing some of them.

Here, I’m gonna take you through all the red flags to look out for that signal when a celebrity pairing isn’t quite as genuine as they would have you believe.

They’re working on a project together

This is the biggest one to look out for.

When a movie or TV show is being made, producers will want as much publicity as possible and what better way to do this than by spinning yarns about the cast getting it on during filming?

Don’t get me wrong, a lot of times they’re totally legit (i.e. Brad Pitt and Angelina Jolie – there’s no way in hell that was planned… yikes).

But there have been so many times where stories ~mysteriously~ leak to the public about cast members getting together. They play up the chemistry in interviews to generate as much buzz for the project as possible.

We fawn over the premiere pics because we’re just so thrilled for the actors who not only made a new movie, but fell in love while doing so.

Then shortly after the promo ends and they’ve fulfilled their contractural obligations, the relationship suddenly goes kaput.

They have something to gain from the relationship

An example of this is Kim Kardashian. Being a reality star, the gal needs to ensure that her life is as fun as spicy as possible so she’ll have a decent storyline for KUWTK / The Kardashians.

Never forget the heavy rumours that Kris Humphries auditioned for the role of Kim Kardashian’s hubby which inked them a lucrative deal for a TV spesh that scored the pair a fuck ton of dough.

Then, just a few weeks after the wedding, Kim filed for divorce, leading many to speculate that Kimba gave him the flick the moment his storyline had played out. 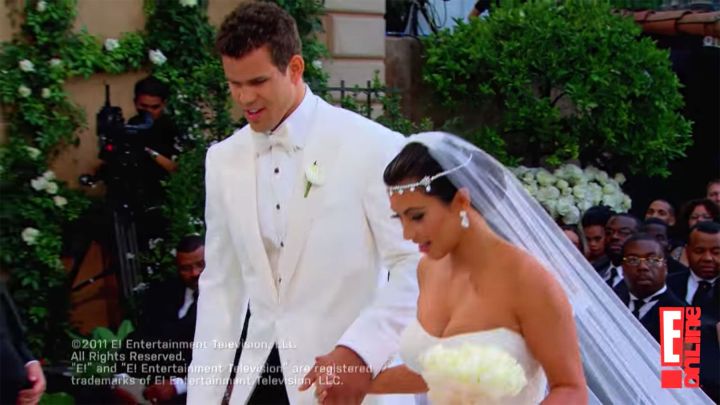 And as for Pete Davidson, he was a huge part of the promo for the fam’s new series The Kardashians.

After KUWTK, the fam had to ensure that folks would still be invested enough to follow them on their new television journey, and so this random romance was formed which had people keen to see it play out on telly.

Need more proof? Over the weekend, someone claiming to be related to an employee at Hulu told Deuxmoi that producers were despo for Kim and Pete to continue their relationship so they’d have content for Season 2.

“Producers are scrambling to keep the Kim and Pete romance alive until Season 2 is finished airing,” they said.

“Kim’s trip to Australia was filmed in mid-June and didn’t get the content they needed. Another filmed trip followed and was assumed to reignite their feelings and get some sexy moments between the two but it was obvious to everyone there’s only tension between the two.” 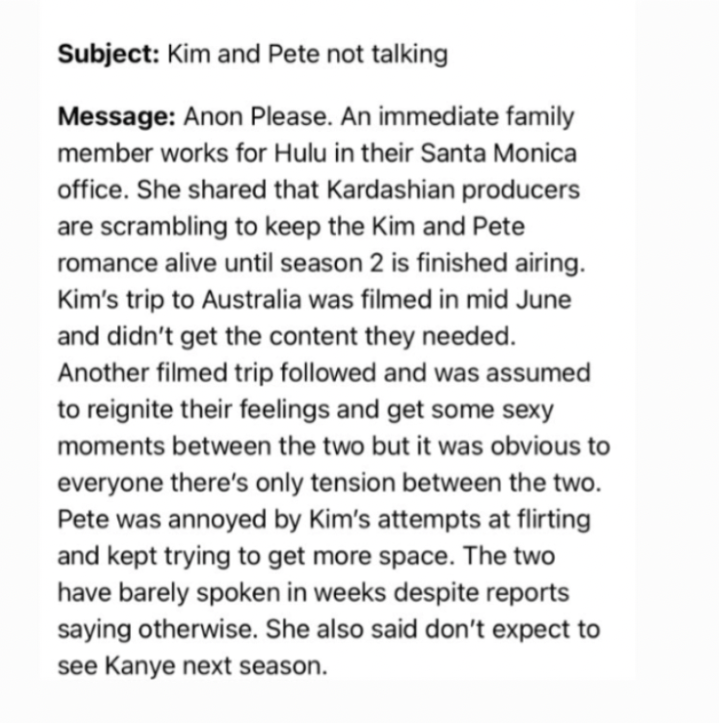 I’m convinced their relationship was cooked up for storyline purposes, probably by Kris Jenner herself.

And what did Pete stand to gain from it all?

Think about his dating track record. He was once a relatively unknown comedian dating Larry David‘s daughter. Then he dumped her and got with Ariana Grande, one of the biggest singers on the planet. All of a sudden everyone knows him and he’s now one of the main stars on SNL.

Then he goes from Ariana to Kim, a celeb with an even bigger profile, and now he’s outgrown SNL and has been cast in multiple films.

I’m not saying his dating life is the key to his success, but his career has certainly been on the up since he got with Ariana and Kim!

And in the case of local celebs, too many times have we seen couples meet on shows like MAFS and The Bachelor. The show will end and they’ll become a regular fixture on each other’s ‘grams to keep people invested in their love story.

We’ve had two examples of this in the last week, MAFS couples Olivia Frazer and Jackson Lonie and Daniel Holmes and Carolina Santos who both announced that they were donezo on the same day.

Considering both couples would’ve been itching to drop their breakup announcements so they’d be talked about once again, I find it so amusing that they accidentally (or intentionally?) did it on the same day and stole each other’s thunder.

They’re photographed together in the middle of bumfuck nowhere

Look, we all know the paps are relentless.

And as parodied in the Spice World movie, they have a sneaky way of tracking celebs down wherever they go.

But when you’re seeing paps magically track down celebrity couples in super remote locations, you just know that they’ve been alerted by someone. And that someone is usually the celeb’s agent who wanted to ensure that their client was photographed on their romantic getaway to keep the love story going.

And they’re always on trips so soon after supposedly getting together, too. Sure, they’re rich and can afford to live the high life, but wouldn’t they be too busy with work to suddenly drop everything and go on vacay? That’s because they are working. It’s a business trip, not a romantic getaway.

How the fresh feck did the paps know to swarm her at the exact moment that she was leaving the getaway by boat?

They got the perfect shot at the perfect time which spun the narrative of their wild breakup, emphasis on the word “narrative” because the whole thing was total fiction.

Speaking of which, those iconic pics from their Central Park date legit look like a magazine photoshoot. It’s so goddamn staged and their little trot around the park looks so disingenuous. I’m actually mad at my past self for ever believing that Haylor was a legit thing.

At this point you’re probably thinking “this cynical prick clearly doesn’t believe in love” and that couldn’t be further from the truth! I’m a hopeless romantic, I swear. I once wrote my boyfriend a poem for Valentine’s Day, FFS.

And I know that when you enter a relationship, you can’t keep your hand off the other person.

But if you’re seeing a celeb constantly get papped macking on in public, there’s usually something suss going on. It’s like they’re reaaaally hammering in the fact that they’re together.

While reality stars froth the attention, I’ve found that a lot of singers and actors prefer to keep their personal life private. So why is it that they’re frequently smooching their partners in public rather than, I dunno, at home?

Probably because they want to make sure that the pics circulate so people think they’re a hot and heavy couple.

An example of this is Shawn Mendes and Camilla Cabello. There are more pics of those two kissing than there are stars in the sky.

And it’s always somewhere obnoxiously public. Courtside at a basketball game, on the beach, hell, they even shared a kissy video on Instagram. INSTAGRAM. They were essentially livestreaming their smooch to make sure everyone knew they enjoy tonsil tennis.

Need more proof that Shawn and Camila’s management were behind many of their viral pap pics?

What about that time when they were photographed going on a lockdown walk with empty mugs. It was towards the end of their relationship and they clearly over it by then. They weren’t even trying to hide the fact that it was a total fauxmance at that point.

I’m gonna leave it at that for now but lemme drop some excellent accounts to follow for more insider intel.

All of the above do a great job at lifting the lid on Hollywood bullshit, showing us what’s real and what’s totally fake.