Anything Twitter can do, we can do better similarly, shout Facebook employees from the diamond-encrusted hyper-ergonomic office chairs they bought when Zuckerberg elected to pay himself in peanuts.

Recently they rolled out ‘Verified Accounts‘, and today they introduce ‘Public Conversations‘ and clickable #hashtags in a bid to generate real-time dialogue and concentrated discussion around relevant items.

An announcement on Facebook’s Newsroom lists the new capabilities for users:
• Search for a specific hashtag from your search bar. For example, #NBAFinals.

• Compose posts directly from the hashtag feed and search results.

To emphasise the pivotal nature of Facebook conversation, the company reveals that between 88 million and 100 million Americans are using the service during primetime television hours. Game of Thrones‘ Red Wedding last week was mentioned 1.5 million times. Our very own Monday night viewing by Aussie pirating motherships most likely translated into phenomenal convo too.

Whether or not we have a case of Facebook Single White Femaleing Twitter or not, we can rest assured our designated privacy settings will still overarch the conversations we initiate and infiltrate. The features, intended to spruik all-encompassing engagement, won’t compromise your sacred propulsions or exclusively-directed incitements, unless you elect to have them compromised. Audiences can still be determined at the time of posting, and now-redundant memes like this will be obliterated from the internet. 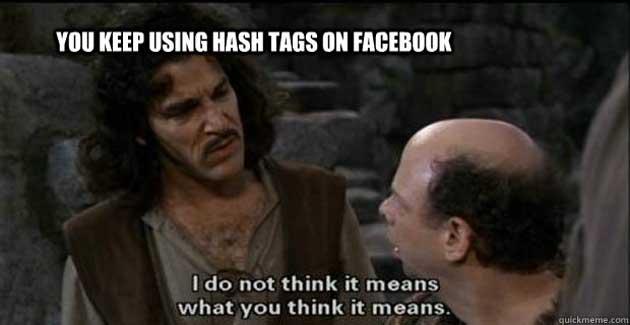