Look, I know absolutely nothing about fashion. My daily outfits generally consist of a pair of jeans, a T-shirt which probably has a band on it, and maybe a jacket if I’m cold. If I’m feeling fancy, maybe I’ll wear a button-up shirt or, depending on the occasion, my one and only suit which is worn twice a year at best.

What I’m saying is, I don’t really give a shit what myself or other people are wearing. But folks, today I saw the Met Gala red carpet and you know what? I think I get it now – everyone’s just cosplaying.

Finally, I understand fashion you guys. As soon as I saw Rhianna walk that carpet with her hectic pope hat, a million mathematical equations flooded my brain. I understood what she was doing. She was simply giving a subtle nod to her idol. Her inspiration. Just like other attending celebrities were.

I don’t wanna yank my own chain here, but I think I’ve been pretty accurate when it comes to guessing what these costumes represent, which is why I’ve catalogued them here for your pleasure. Read ’em and weep, folks. 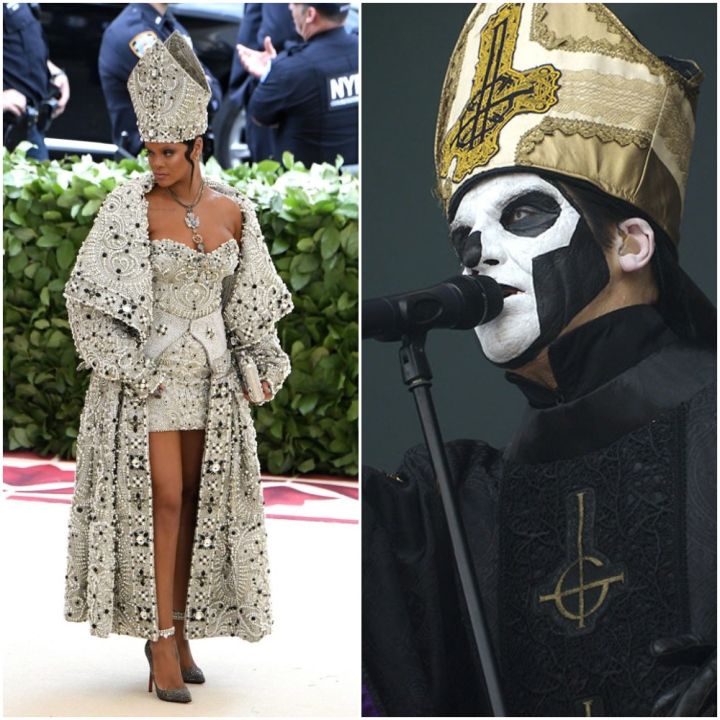 Well shit, I didn’t have Rhianna pegged as a Ghost fan, but I’m glad she is. This is very clearly a nod to the metal band’s front man / enigma Papa Emeritus, or maybe it’s her way of announcing that she’s their new vocalist.

Either way, I’m into it. 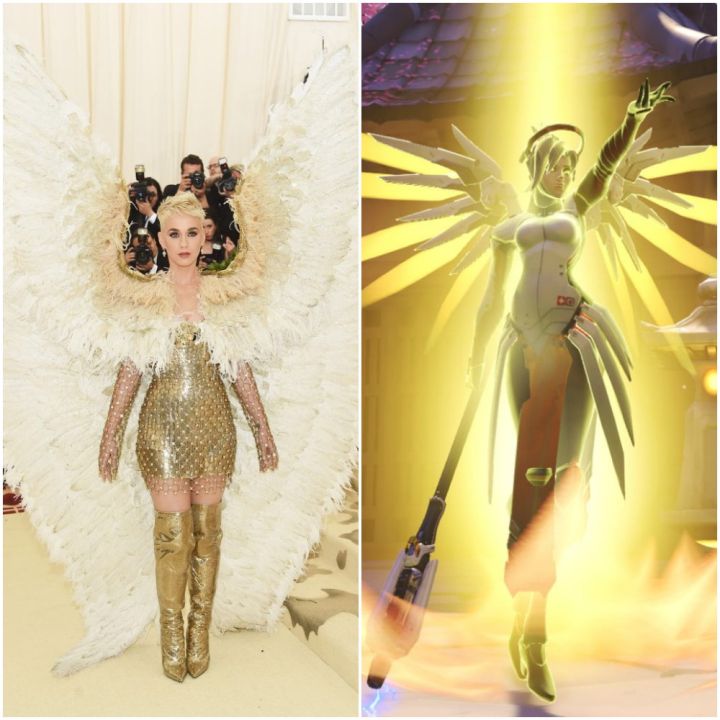 Ohhhh DANG, here comes Katy Perry dressed as Overwatch‘s healing character, Mercy. She sure as shit looks the part, but can Katy resurrect her fallen pals when they get knocked down? I fucking doubt it.

At least we know Katy’s a gamer now.

Michael B Jordan’s Belt / The Opening Scene From ‘Cliffhanger’ 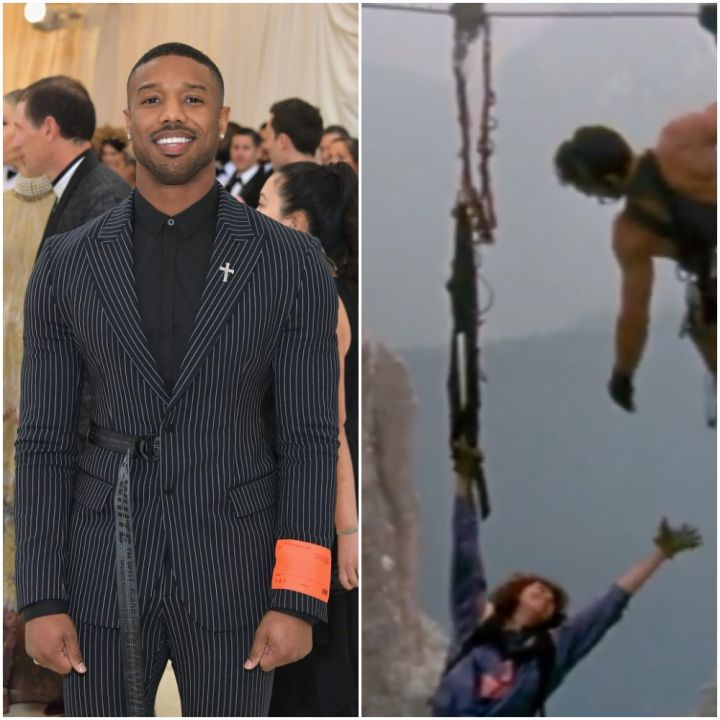 When I first saw old mate Michael‘s belt I thought that it might have just been an elaborate fanny pack where he keeps all of his celebrity wares, but then I realised it was actually just a nod to the opening scene of 1993’s action blockbuster ‘Cliffhanger‘ starring Sylvester Stallone.

Mr Jordan is clearly still shaken by the scene in which Stallone’s girlfriend Sarah is shown helplessly clinging on to nothing but a failing strap. We’re still hurting from this loss as well, Michael. 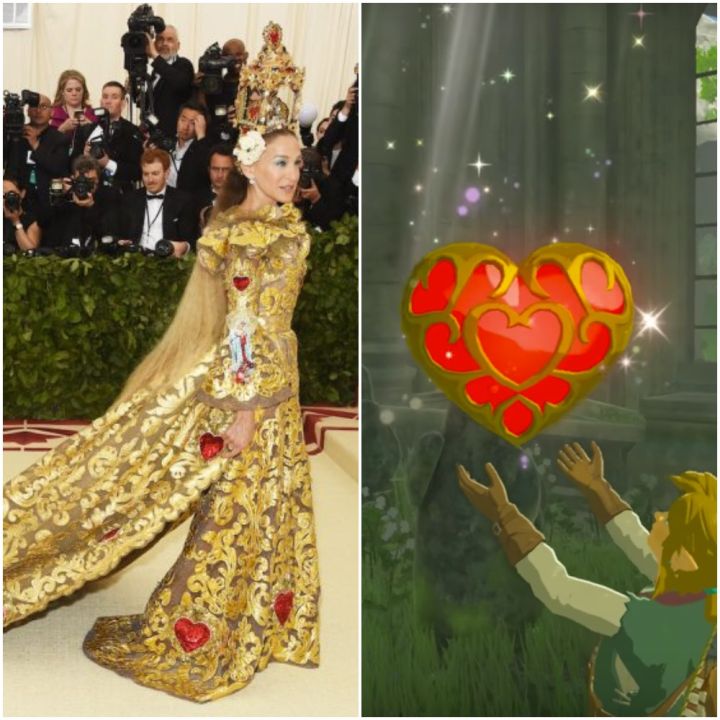 SJP is in the house and you better believe she’s been collecting hearts, bitch. Parker is at least three quarters of the way through Breath of the Wild and swears she’ll finish it when she finds the time, she’s just been so damn busy, you know?

A tremendous ode to a game that’s so damn good it’s criminal. 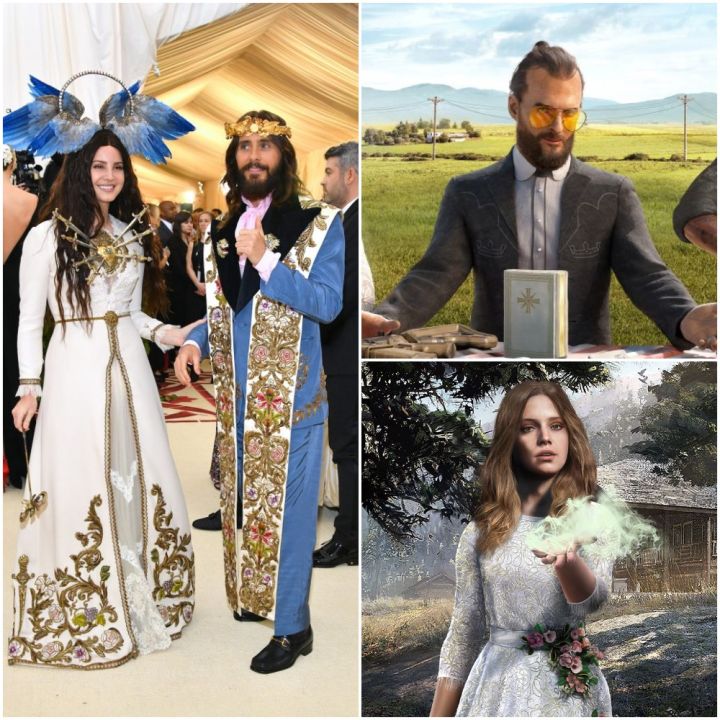 Leto Del Ray here has obviously been smashing Ubisoft‘s latest title Far Cry 5, only their admiration is perhaps a little misguided. You see, Joseph and Faith Seed are leaders of a violent religious cult, as well as siblings.

The real-life pair have taken some, uhh, ~artistic liberties~ with the daggers in the heart thing, but hey, I still see the likeness. 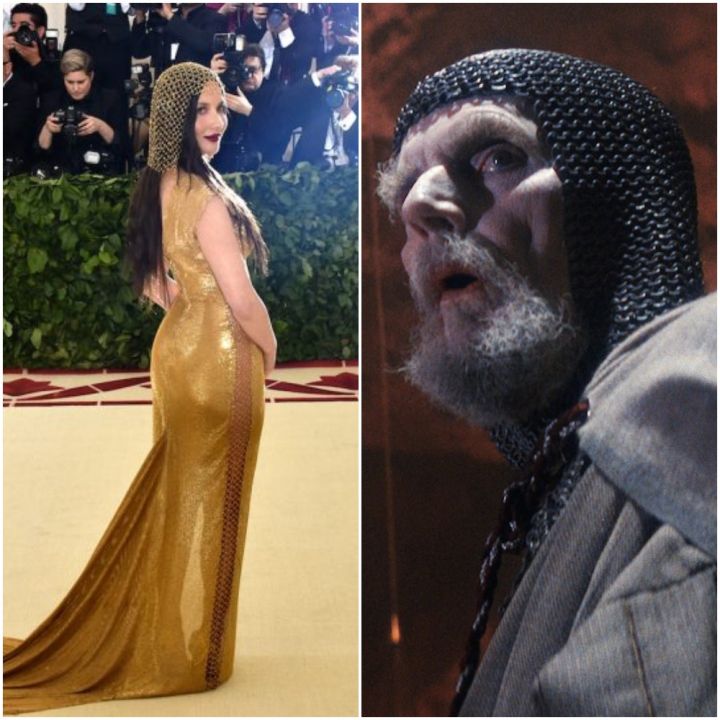 Olivia mentioned that she was interested by The Crusades today, but what she failed to mention is that she’s also heaps into Indiana Jones and the Last Crusade.

I mean, her outfit is right on the Munny (HA!) here, isn’t it? Nothing says ‘Elderly Fella Guarding A Very Old Cup’ quite like a bit of chainmail. 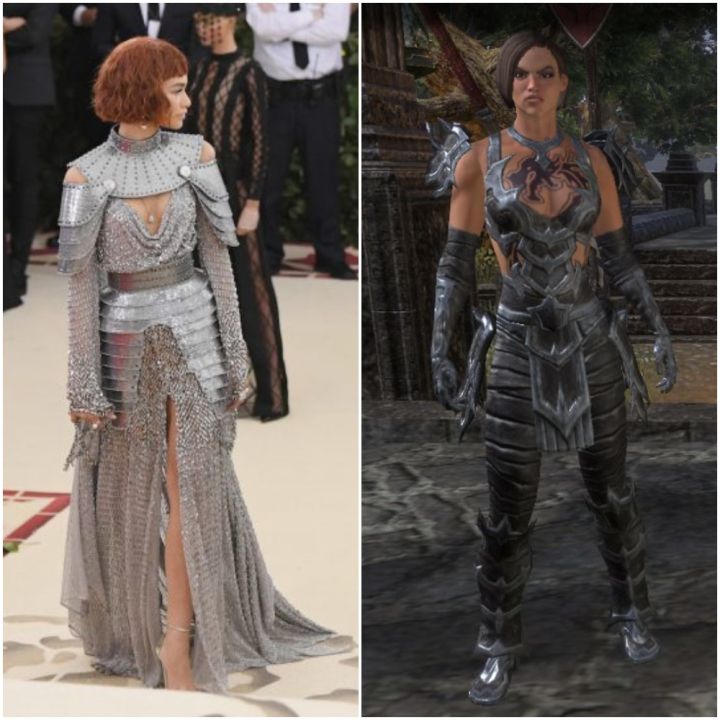 NERD ALERT – according to her get-up, Zandaya clearly loves to play any and all of The Elder Scrolls games. And who can blame her? It’s one of the best RPG series of all time.

I hope she gets that outfit put into the game as custom armour. It’d be rare as fuck for sure. 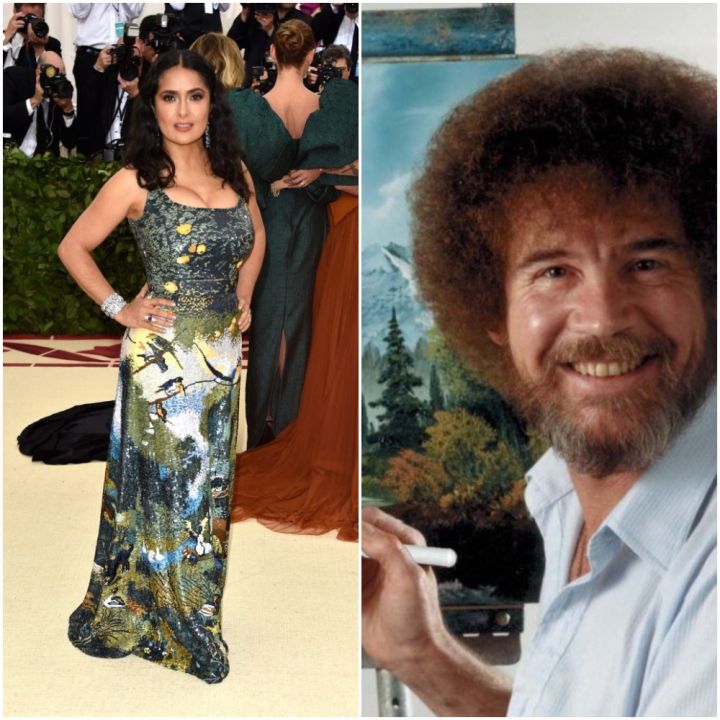 Watching Bob Ross paint a scenic masterpiece right before your eyes on the telly is almost as calming as the cracking of a fireplace on a cold night. I can see how Hayek is channelling that same notion in her Met Gala outfit here.

Thank you for reminding us of sweet, precious Bob. 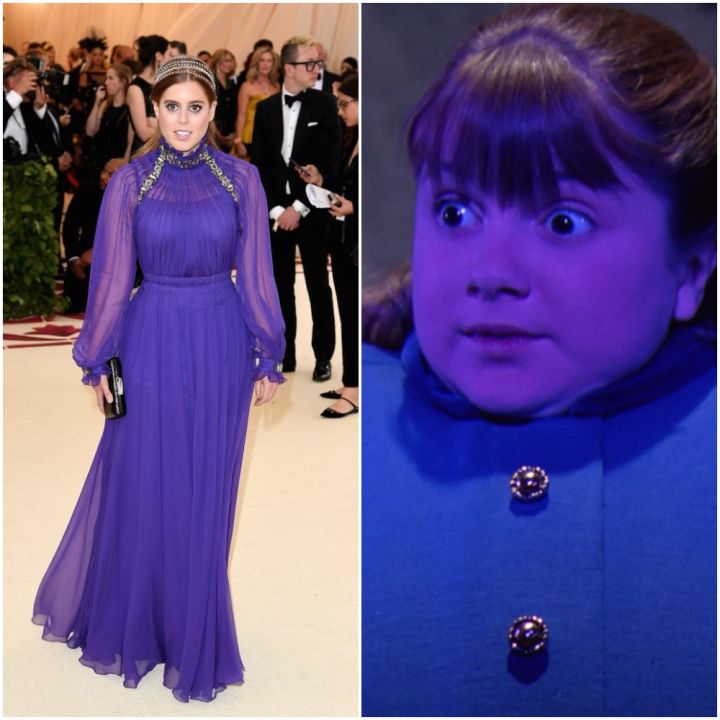 Ok look, this one is here purely for the colour. I mean, it’s nigh on perfect. 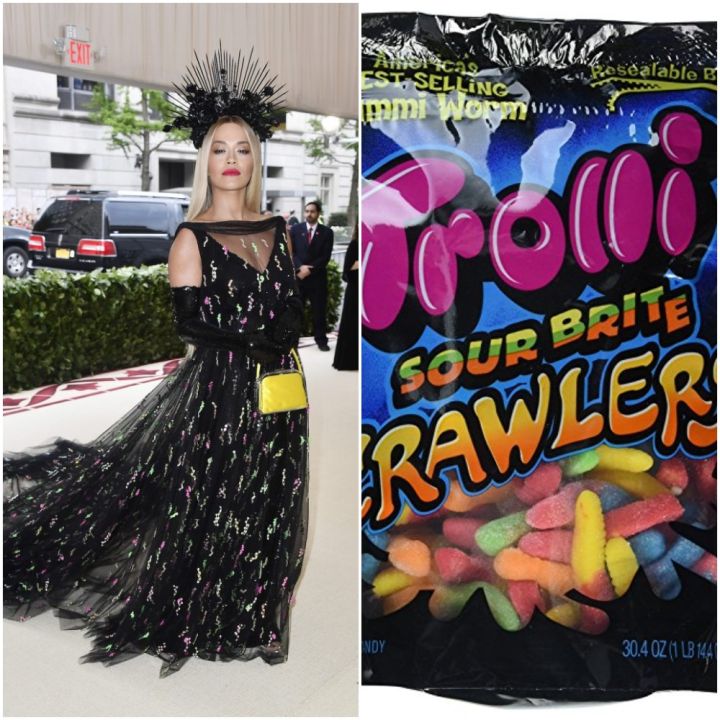 I don’t really have any understanding of what Rita Ora is known for, but fuck me rigid I am salivating like hell right now over gummy worms. Remember gummy worms? They are so good and delicious. Jesus.

Rita gets extra points for activating my nostalgia cortex. 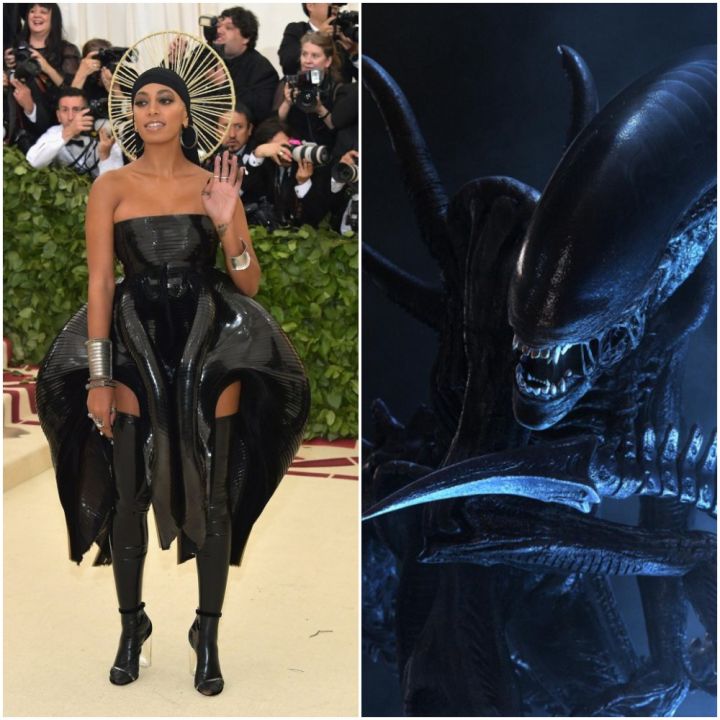 Hell yeah, Solange. Nothing says Met Gala like a Xenomorph-inspired outfit that would feel at home in any of the Alien movies.

I’m going to assume she was referencing Alien 1 and 2 with this piece, because Solange has taste and they’re by far the superior films.

Want some sweet free online games to check out, too? Suss out these ones.