So few celebrities have been at the forefront of the pop culture zeitgeist since they were legit in nappies. Sure, Lindsay Lohan has been in the spotlight since she was just a kid, but in 2020, she no longer emanates the cool energy that she once did back in her Mean Girls days.

The Olsen Twins, however, have been defining cool since the ‘80s and remain the most mysterious but coveted famous folk in Hollywood. 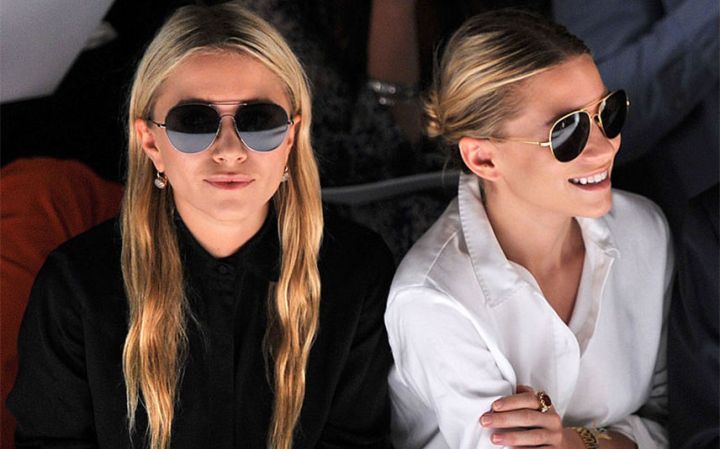 Although they’re now mostly known for their street style and signature Starbucks, ciggie and large sunglasses-clad pap pics, once upon a time they were huge movie stars who portrayed sets of fictional twins in a bunch of batshit but beloved flicks that made us desperately wish we were their triplet.

While every single one of them was brilliant, here, we’ve ranked the flicks by how badly we wanted to join their coven (they’re witches, I’m sure of it. But more on that later).

35. The Adventures of Mary-Kate & Ashley: The Case of the United States Navy Adventure (1997)

This is one of the first in a long series of Olsen and Olsen Mystery Agency flicks where, I shit you not, legit adults calls upon the infant twins to solve crimes. In this instance, they’re hired by a government-employed astronaut to help figure out the source of a ticking sound that’s preventing them from launching a shuttle.

This is cooked on a variety of levels that I don’t even care to get into, but believe me when I say that this deserves to be at the absolute bottom of this (and any) list. Not fun.

Sure, the idea of being on a sick cruise might’ve been heavenly back in ’95, but given recent events, it’s exactly that… sick.

The title makes it sound like it’s a fun, aquatic adventure, right? Well, for the most part it is, until they stumble upon what they believe to be a DEAD BODY in the woods. Yeah, I reckon I’ll sit this one out too, if ya don’t mind.

Look, I was totally onboard with all that Area 51 hype, but in practice, hunting aliens actually sounds pretty fkn scary.

The girls are summoned by three dwarves to investigate after Santa Claus is seemingly involved in a violent plane crash. Ho, ho, no.

In this one, they’re hired by a funhouse owner to investigate a mysterious noise, which turns out to be a monkey. Ok, that I can handle.

Pretty much the same plot as the above, only they’re called on by prospectors to hunt down what they think is a monster, which turns out to be an active volcano (???). The power of these girls, honestly. But still, no bueno. 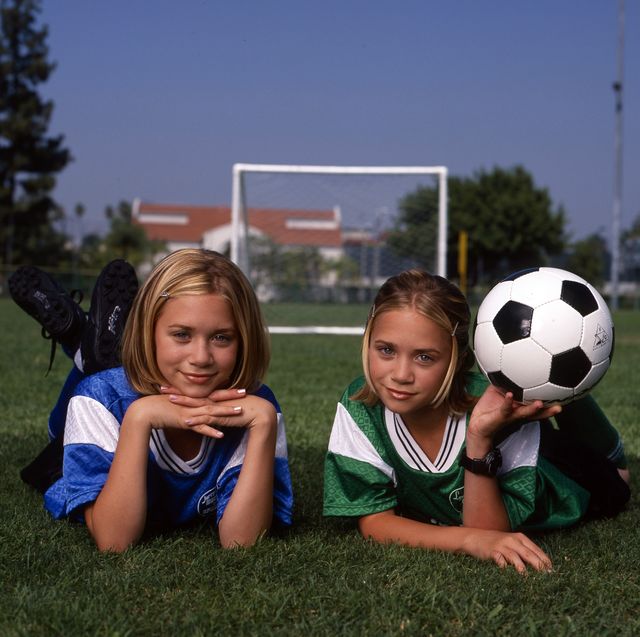 As the title may suggest, Switching Goals casts the girls as two soccer-obsessed sisters. While it was sick to see a film that broke down gender barriers in sport, I fucken’ hate sport and therefore had no desire to join the team. Don’t kick it to me!!!

Again, not much of a sporty, outdoorsy person, so attending the twins’ camp-out party was a big no, for me. We simply must stan the yee-haw aesthetic, though. 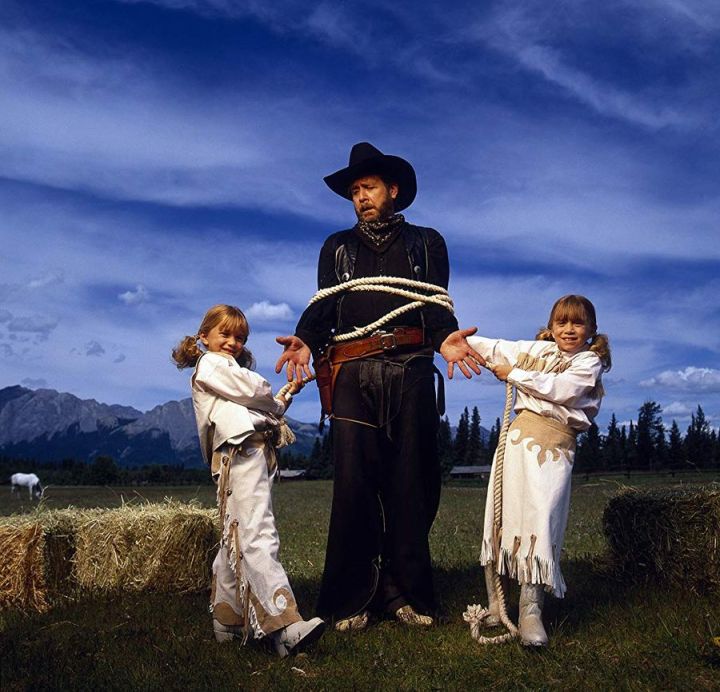 See above. Love the cowboy hats, hate the outdoors. 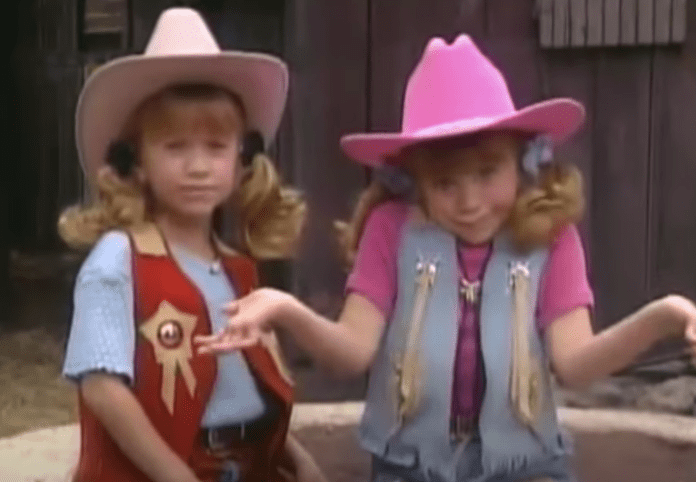 Were they sponsored by an equestrian brand or something?

This iconic noughties flick sees the gals head to London to compete in an international Model-UN competition. Overall it’s a cute concept, but considering how much of a mess the world is in, I wouldn’t even know where to begin in a UN contest.

I’ve popped it a bit higher on the list, though, ‘cos there are some A++ style moments in the flick: 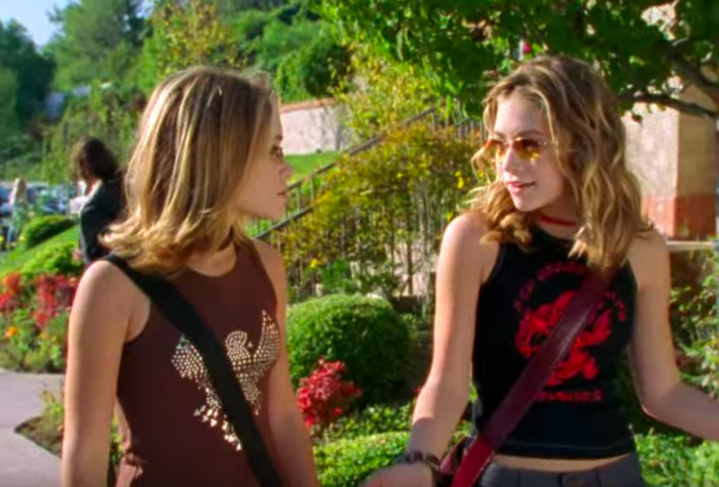 The girls are on a quest to find a GF for their dad, which I didn’t relate to as a kid, but would ya just check out their chic noughties lewk? 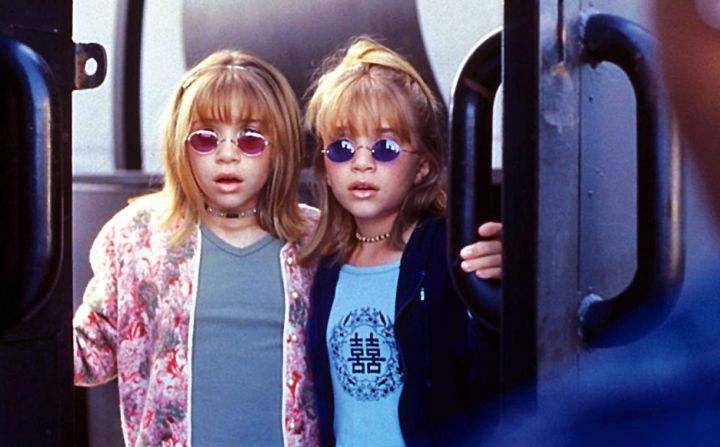 I still wear those John Lennon sunglasses, based purely on the fact that the Olsen Twins said they’re cool, so therefore they are cool. Forever. 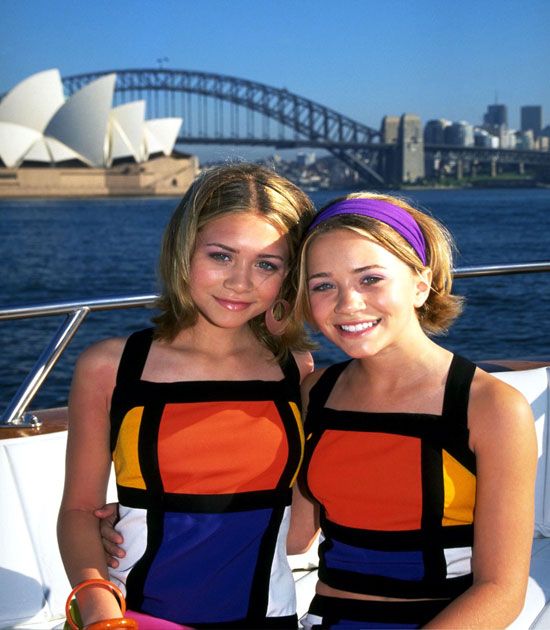 Okay, I know this is pretty low on the list for such an iconic flick that showed off Australia’s gorgeous landscape, but the point of this ranking is to highlight flicks that made me wanna be an Olsen Triplet.

I already know what it’s like to live Down Under, plus the added concept of having to be in the Witness Protection Program for accidentally thwarting a diamond heist isn’t a fun vibe to live out, I’d imagine.

Visiting Paris, however, is something I’d definitely say ‘bonjour’ to.

This is the first in the twins’ “You’re Invited” series, where the gals host tons of epic parties for no real reason, other than the fact that they’re the Olsen Twins and they can do whatever the fuck they want. Who among us didn’t want to be invited to that sleepover party?

Ballet teachers across the globe rejoiced when this flick was released ‘cos it made girls (and boys!) everywhere beg their parents to sign them up for ballet.

This flick was released around the time that all my friends were throwing costume parties and I guarantee every single one of them consulted this when planning the thing.

Only, much to everyone’s disappointment, the guests at the party were just the idiots in our grade, five teenagers dressed up as the Spice Girls, and a bunch of lame parents. No Olsen Twins…

The sisters throw a Christmas party. What’s not to love!?

See above, but change ‘Christmas’ to ‘mall’. I remember being so envious of the epic California mall they visit. A far cry from the lame local Westfield. 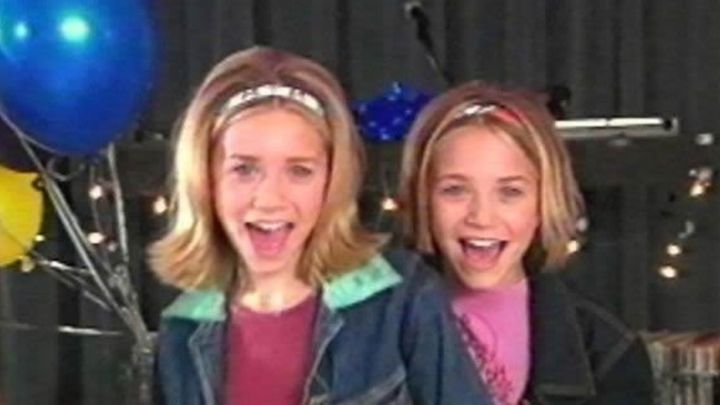 By this stage, the girls had transitioned from kiddies to tweens, and the most popular tweens on earth, at that. The envy level was high with this one, as they pretty much determined what was desirable from haircuts to clothes to lingo.

This one’s high on the list because the Olsen Twins are real-life fucken’ witches who foresaw their career in fash way back when they were just 13-years-old (a witchy number, no less).

In this flick, the sisters fantasise about having their own fashion line and manifest a tour at the LA Fashion Institute of Design and Merchandising, foreshadowing their now-huge empire, The Row. 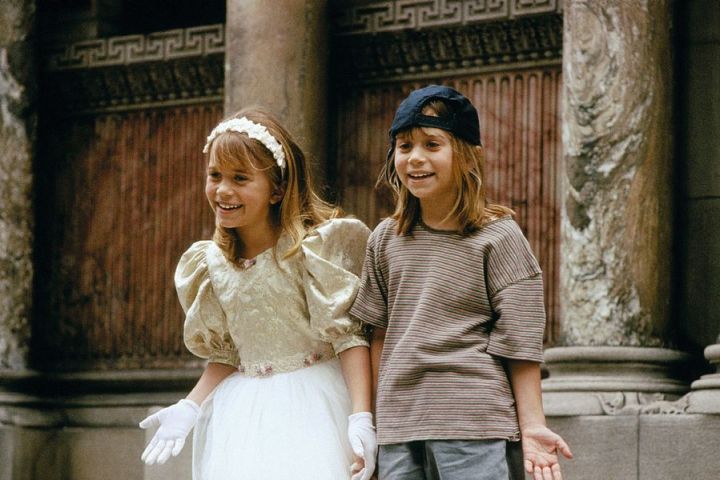 Not that we’re considering critical reception here, but if you care, this is probably the best-rated Olsen Twins flick ‘cos it’s essentially a rom-com for kids (think, The Parent Trap, but with actual twins).

The Olsens’ first-ever made-for-TV feature, which saw them transform from that cool kid in Full House to pint-sized powerhouses in their own right.

In this detective drama, the girls are hired by pirates, which intersected my childhood dreams of being a pirate and being an Olsen Triplet. 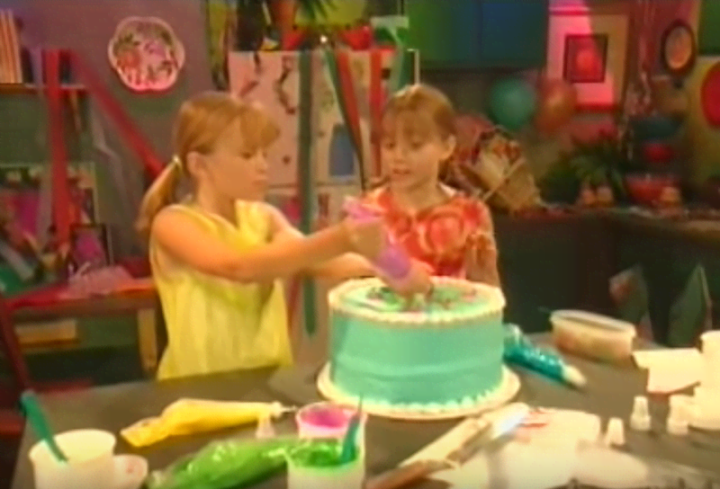 The twins plan a birthday party on their own, without parental supervision, but somehow with unlimited funds. Put extra candles on the cake for me pls, bbs.

This time the twins are recruited to catch a thief who’s been stealing shiny shit from an upscale hotel in Hawaii. Solving crimes in Hawaii? Aloha, bitches.

Here’s another example of when the sisters channelled their psychic powers into their films. The Challenge sees the girls come together to star in, wait for it, a reality series!!!

Very ahead of their time. 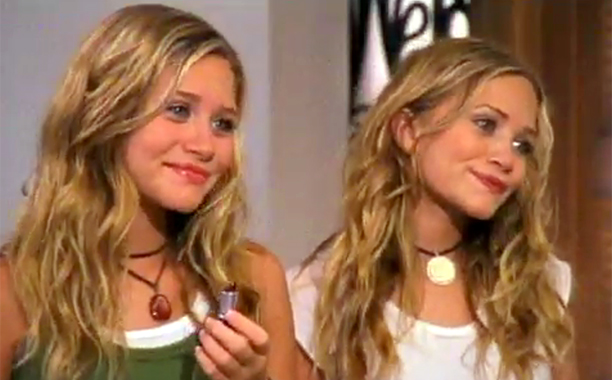 It’s their last straight-to-video feature, and the final scene sees the girls’ former romantic conquests fighting over them which is always a dream, isn’t it?

Ya know how most people grow up pining for the day when they get their license? Not me, I dreaded it. Until I saw this flick, that is. 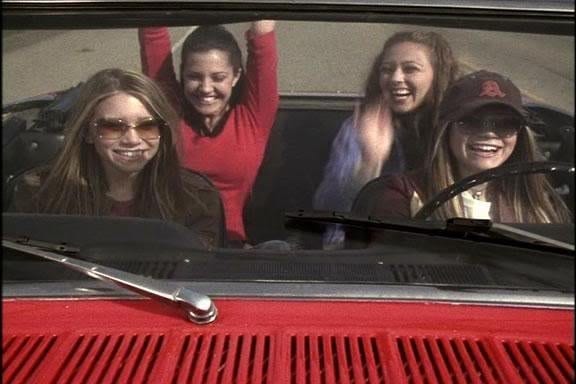 Too bad if you wanna check it out, though, ‘cos it’s pretty much been scrubbed from the internet (presumably because it’s one of their weaker numbers).

Maybe hit up your die-hard Olsen Twins stan mate ‘cos they might lend you their VHS tape if you’re trustworthy enough.

The twins ride their bikes from California to Transylvia (!), sans adult supervision (!!), to suss out if a house is haunted (!!!).

Their IRL little sis Elizabeth Olsen (who I fucking LOVE as the Scarlet Witch in the Marvel franchise) makes a cameo, as well. Crime? Haunted shit? Olsen family reunion? Count me in! 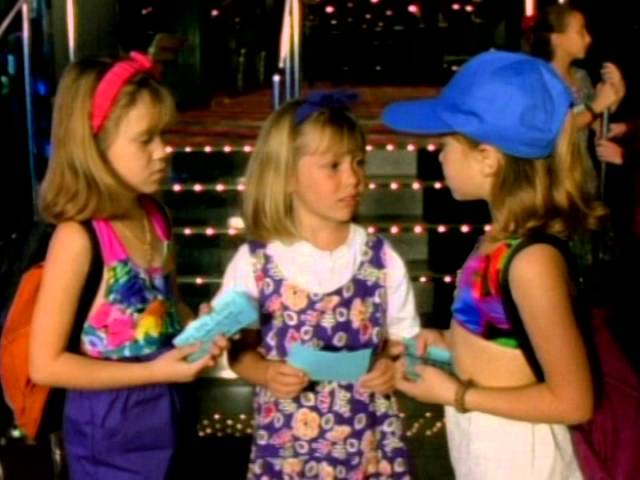 Ciao, epic Rome vacay. Once again, the girls dip their trendy toes in the fashion industry as they play interns working in Italy. Only they get fired from their chic gig to work at a pizza joint (which might also be another crystal ball moment as they recently gave up their position as The Row owners). 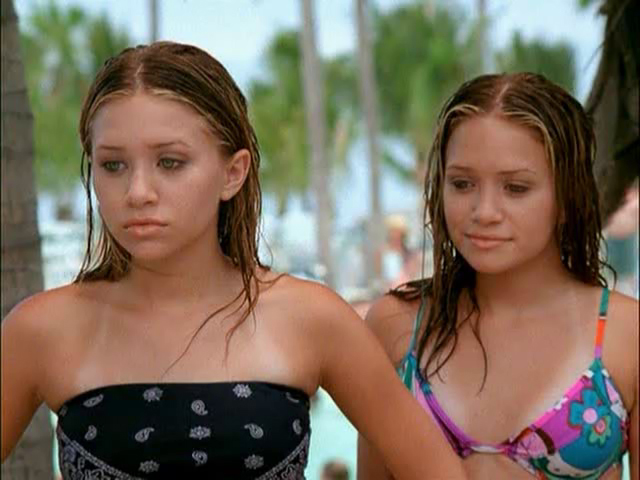 The sisters play spoiled rich teens who are pissed at their parents for forcing them to fly on a private jet with them to the Bahamas, instead of going to Hawaii for Spring Break with their friends. Considering the most exciting family vacay I ever went on as a kid was the Gold Coast, naturally, I was (and still am) green with envy watching this film.

Back to Hawaii we go! This one’s higher on the list because this time they actually have their mates with them and don’t spend the whole trip being salty at their folks.

Their second-ever flick, Double, Double, Toil and Trouble is the Halloween flick of my ~dreams~ that not only made me want to be an Olsen Triplet, but also contributed to my obsession with the dark arts. 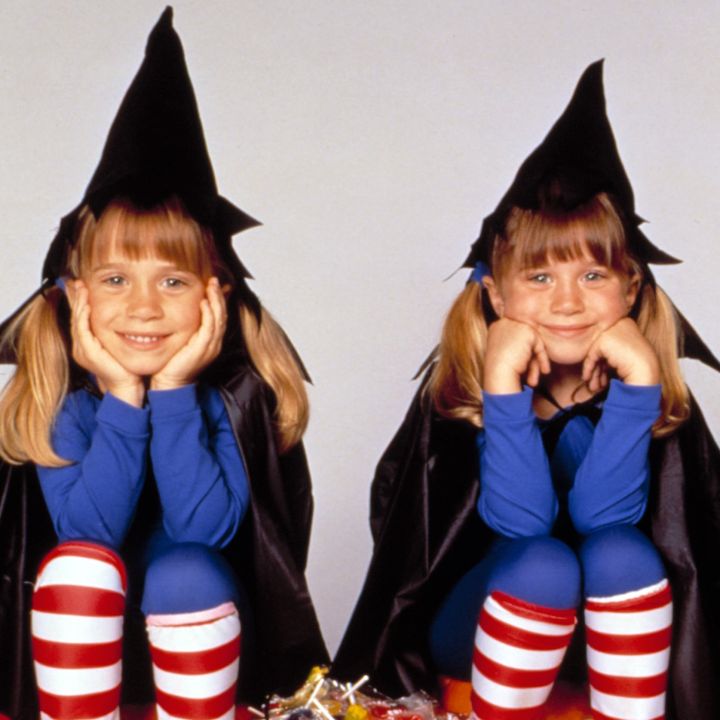 Fuck this film slaps. If you haven’t seen it, give it a watch this Halloween. It’s primo content. 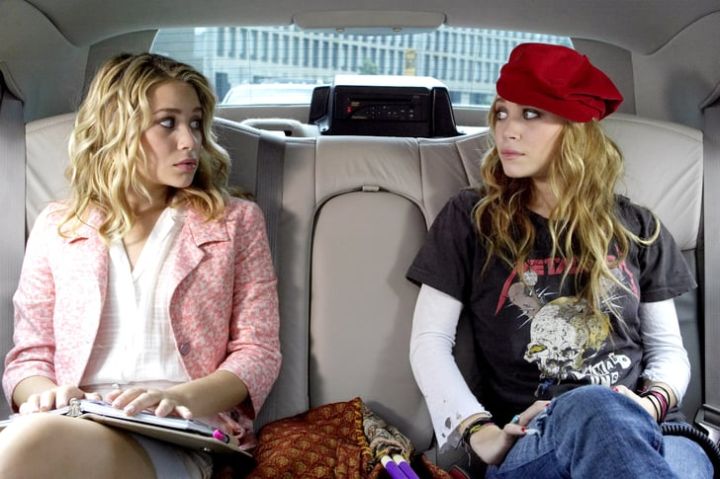 Forever known as the last flick the girls have ever (and probably will ever) make.

Aside from the fact that the movie had some hilarious one-liners, a bullshit but captivating plotline, tons of celebrity cameos (hellooo Jared Padalecki) and the to-die-for background of New York City, the sisters portrayed two of the most dynamic and likeable characters in their entire film career, which is probz why I desperately pined to be their third.

Still do, in fact.