Netflix is already updating Elliot Page‘s name in its metadata, after the Juno and Umbrella Academy star came out as trans and introduced the world to their new name.

Within hours of Elliot’s announcement, the description for the Netflix original Umbrella Academy had been updated. 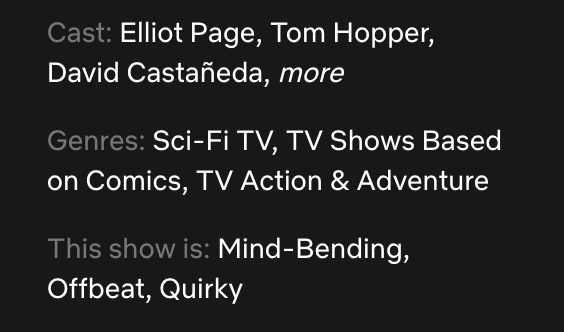 He plays Vanya Hargreeves, a cisgender woman whose superpower involves converting sound into a powerful force. An insider told Variety that there are “no plans” to change Elliot’s role when the series comes back for its third season.

LGTBQ advocacy group GLAAD said that despite the calls of *some* dickheads online (our words, not theirs), the role of Vanya Hargreeves should not be recast.

“Trans actors can and do play both trans and cisgender characters,” GLAAD’s director of transgender media Nick Adams told Variety.

“I’m sure Elliot will continue to be brilliant in Umbrella Academy and many different types of roles in the future.”

IMDb has already updated Elliot Page’s, uh, page. Closer to home, Stan Australia is also in the process of making the updates.

It all happened within hours of Elliot’s announcement, which he made across multiple social media channels.

“I want to share with you that I am trans, my pronouns are he/they and my name is Elliot. I feel lucky to be writing this. To be here. To have arrived at this place in my life.”

Elliot, a long-time advocate for LGBTQIA people, promised to “continue to strive for a more loving and equal society”.

“And I love that I am queer. And the more I hold myself close and fully embrace who I am, the more I dream, the more my heart grows and the more I thrive. To all trans people who deal with harassment, self-loathing, abuse and the threat of violence every day: I see you, I love you, and I will do everything I can to change this world for the better.”

He also pointed to the “staggering” statistics of violence and discrimination against trans people, which disproportionately impacts Black and Latinx people.

“To the political leaders who work to criminalise trans health care and deny our right to exist and to all those with a massive platform who continue to spew hostility to the trans community: you have blood on your hands,” he said.

“You unleash a fury of vile and demeaning rage that lands on the shoulders of the trans community, a community in which 40% of trans adults report attempting suicide. Enough is enough. You aren’t being ‘cancelled’, you are hurting people. I am one of those people and we won’t be silent in the face of your attacks.”