After what’s been the most chaotic press tour of the year, Don’t Worry Darling finally premiered at the Venice Film Festival. All the usual suspects attended the premiere including director Olivia Wilde along with Harry Styles, Florence Pugh, Nick Kroll, Chris Pine and Gemma Chan.

Despite the abject “awkwardness” of the cast, as quoted by a Deuxmoi spy, the response to the film was surprisingly positive.

In fact, the movie was met with a five-minute standing ovation from the crowd.

The reviews have started pouring in and it sounds like the gang, for the most part, pulled it off.

Some of the reviews have been positive, some have been heinous, but one thing has been consistent across the board: absolute chaos.

The general consensus is that the direction is fab, the acting is fab, but the pace of the film is drab. 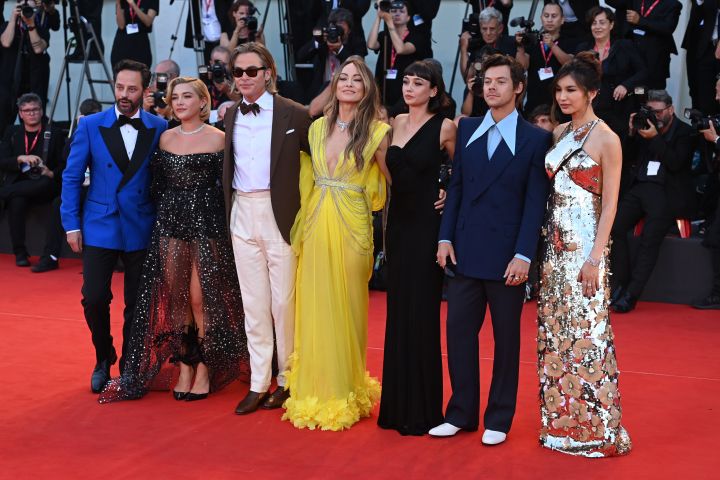 The cast at the Venice Film Festival. (Credit: Getty)

It praised Wilde’s direction, writing that “in the end it is Wilde and her team of artisans who create the visual look that makes the story we have seen in various forms many time before work as well as it does here.”

It wrote that Styles “is the real deal as an actor and has great promise”, while Pugh “continues to show her range even when the character ventures into some pretty ludicrous situations.”

Variety addressed the behind-the-scenes turmoil in its review, writing that it “would be hugely unfair to allow this tempest in a teapot of gossipy turmoil to influence one’s feelings about the movie. If you want to talk about problems related to Don’t Worry Darling, you need look no further than at what’s onscreen.”

It described Wilde as “a gifted director who knows how to set a mood,” adding that “she does that to the max, and for a while you get caught up in it.”

The critic pointed out Styles’ potential as an actor, writing that “there’s actually something quite old-fashioned about Styles.”

“With his popping eyes, floppy shock of hair, and saturnine suaveness, he recalls the young Frank Sinatra as an actor,” it wrote.

“It’s too early to tell where he’s going in movies, but if he wants to he could have a real run in them.”

The main criticism was that the film “takes you on a ride that gets progressively less scintillating as it goes along.”

READ MORE
Chris Pine Is Ditching DWD's NYC Live Q+A & After That Last Train Wreck, Who Can Blame Him

Vulture was quite mixed in its review, opining that Don’t Worry Darling is “neither as bad as some are clearly hoping it will be, nor as good as it probably needs to be to overcome the public relations nightmare its press rollout has become.”

“The film is smooth, competent, (mostly) well-acted, and merely tedious,” it added.

Meanwhile The Guardian gave the film a brutal 2-star review, writing: “It spoils its own ending simply by unveiling it, and in so doing shows that serious script work needed to be done on filling in the plot-holes and problems in a fantastically silly twist-reveal.”

It described the twist as “absurdly negligible and contrived, and the details are not thought through.”

As for the acting, here’s where shit got particularly chaotic.

It opined that “Styles may or not be a talented actor; it’s not easy to tell from this, but the normally excellent Pugh has not been interestingly directed, certainly not compared with her work in broadly comparable movies such as Midsommar or The Falling.”

We’ll all be able to see for ourselves when Don’t Worry Darling hits cinemas on October 6.