Donald Glover is an enigma. He regularly deletes what little social media presence he has, rarely does interviews these days, and has quite a lot going on, in between Atlanta, Solo: A Star Wars Story, The Lion King, having two kids, and finishing up his final album as Childish Gambino.

Atlanta returns for its second season this week (coming soon to SBS), and Glover has given one single interview: to the New Yorker‘s Tad Friend.

So popular was this interview (and Glover’s ever-growing star power), that for a good 30-minutes this morning, we were unable to even access it due to the New Yorker’s servers going kaput.

It’s a nuances, incredible look at a show groundbreaking for its handling of narrative and race, and the enigmatic creator behind it. You should absolutely read it – do so right here – but here’s some of the best bits we’ve gleaned.

His two-year-old son is called Legend.

Alright, so this is a minor detail and one we technically already knew – he announced it at the Governor’s Ball in 2017 – but if you missed the news that time round, here it is again. Lil’ baby Legend.

He had to “Trojan-horse” Atlanta to get it made in the first place.

Atlanta is that rarely definable show, and much of the New Yorker piece is dedicated to putting into context just how outside the mainstream it is. “I knew what FX wanted from me,” said Glover. “They were thinking it’d be me and [comedian] Craig Robinson horse-tailing around, and it’ll be kind of like Community, and it’ll be on for a long time. I was Trojan-horsing FX. If I told them what I really wanted to do, it wouldn’t have gotten made.”

His brother Stephen, who is also his closest collaborator on the show, explained it this way: “Donald promised, ‘Earn and Al work together to make it in the rough music industry. Al got famous for shooting someone and now he’s trying to deal with fame, and I’ll have a new song for him every week. Darius will be the funny one, and the gang’s going to be all together.’ That was the Trojan horse.”

The Glover brothers felt that the network only responded to the show after it tested well. But Landgraf told Glover early on, “The parts that you’re worried we’re going to think are too weird – lean into those.” And it is a fundamentally weird show: where else would a black rapper called Justin Bieber be introduced then forgotten, or an invisible car become real for nothing more than a gag, or an entire episode (directed by Glover) be dedicated to parodying Black Entertainment Television?

The relationship between Glover’s Earn and his rapper cousin Alfred (Brian Tyree Henry) is a parallel for Donald and Stephen.

Friend writes that growing up, “Donald was light-skinned and sunny, and his friends were the white kids at his school for the performing arts; Stephen was darker-skinned and stoic, and his friends were the bused-in black kids at his school, which was not for the performing arts.” Later, he and Glover muse on which is better: to be the one with all the opportunities but who can’t see them, or to see all of the opportunities but can’t have them? Glover says he’d prefer to be the latter, before talking about his more successful, white contemporaries. (“I went to school with white people who had less talent than me—because I’m talented as fuck—and they’re doing way better than me. I went to N.Y.U. with Lady Gaga.”)

So much of his work – Atlanta included – looks at navigating different communities, of being black but not the same kind of black as everyone else. Glover says that hanging out with Stephen as an adult changed his “consciousness” and made him “super-black”, because his brother is “scarier to white people.”

He tells the story of his brother being denied an apartment on Airbnb. “This woman turned him down, supposedly because his posture was bad—in the photo. O.K., he’s one of the two smartest people I know, and his only crime was he wanted to give you four thousand dollars!” 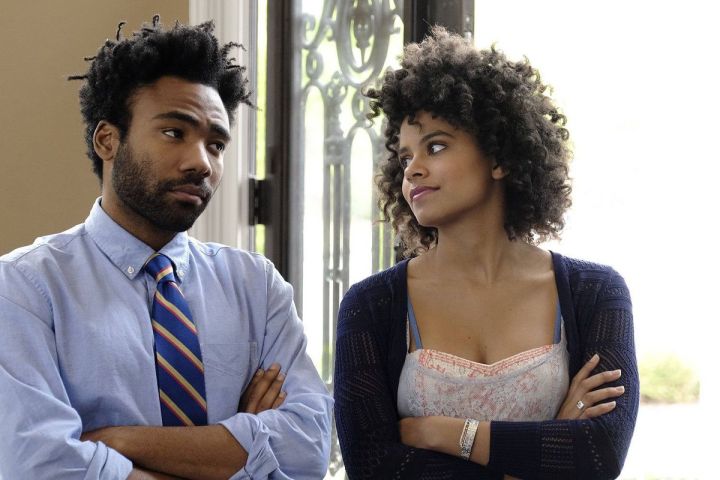 Stephen serves as his “black translator”, who helped him navigate the tricky issue of finding that Jessica Tillman, the actress who plays Van‘s friend Christina (both characters are mixed-race, with the narrative being that Van “chose black” and Christina “chose white”), she wasn’t quite light-skinned enough. “I instantly felt I was being colourist, but I’m also needing to use her skin tone to tell a story—so, wait!” said Glover. Stephen helped him work through it, and Tillman was cast.

As for his white translator, that was executive producer Paul Simms, who fought for Glover to be able to use the N-word freely and unselfconsciously. (“I’m black, making a very black show, and they’re telling me I can’t use the N-word! Only in a world run by white people would that happen.”)

Black-ish creator Kenya Barris explains: “You need the translator for the three-minute call after the meeting. It’s for when the execs call the white guy to say, ‘What exactly did Kenya mean there?,’ and to be reassured.”

He was hired as writer on 30 Rock partly because he was black.

Glover was hired to write for NBC sitcom 30 Rock at the age of just 23, while he was still living in New York. Tina Fey tells Friend that while she admired Glover’s talent, she hired him because the funds from NBC‘s Diversity Initiative “made him free“.

His secret to being good at everything is to be just good enough to not notice that he’s bad.

Okay, so while this definitely sounds like Glover is being modest – the dude is insanely talented, works hard, and in multiple fields – he claims that his “superpower” is simply understanding the algorithm to being good. (Simple. Sure.)

He tells a story of learning how to excel at sport at the age of ten. “I realised, if I want to be good at P.E., I have to be good at basketball,” he said. “So I went home and shot baskets in our driveway for six hours, until my mother called me in. The next day, I was good enough that you wouldn’t notice I was bad. And I realised my superpower.”

He tells Friend that “it sounds like I’m sucking my own dick” on being good at everything, but asks him, “But what if you had that power?” Honestly, motivational inspo right there.

He’s really, really not into the idea of Christmas.

Glover and his family grew up Jehovah’s Witness, which would later become a defining part of his Community character Troy Barnes. Jehovah’s Witnesses don’t celebrate birthdays or Christmas, and it feels like Glover isn’t really into the whole thing, anyway.

“People always tell me, ‘I feel sorry for you’,” he said. “I feel sorry for you, because you were lied to your whole life, and now you have to repeat the lie about Santa Claus to your kids every Christmas to feel whole. The truth is you’re definitely going to die alone.”

Time and time again, Glover’s wariness of people and sense of separation from the world is brought up in the interview. When Friend asks him to name one thing he’s bad at, Glover replies, “People. People don’t like to be studied, or bested.” While his girlfriend Michelle White welcomed their second child in January (she’s “heavily pregnant” in this interview), Glover says he can count on “two fingers” the people who actually love me.

When he talks about his future goals, of the kind of person he wants to be or the career he wants to emulate, he says, “The thing I imagine myself being in the future doesn’t exist yet … Sometimes I dream of it, but how do you explain a dream where you never see your father, but you know that that’s him over your shoulder?”

Glover has repeatedly deleted his Instagram and Twitter accounts, re-emerging only on special occasions (like during Oprah‘s incredible Cecil B. DeMille speech at this year’s Golden Globes, during which he simply tweeted “OPRAH”).

“I felt like social media was making me less human, and I already didn’t feel that human,” he said.

Glover landed the part of Troy Barnes six days after quitting 30 Rock. By season two, showrunner Dan Harmon said that he was “literally writing scenes that ended ‘and then Donald says something to button the scene'”.

But Chase – whose antics on set are well-documented – wasn’t happy for someone else to be the star. “Chevy was the first to realise how immensely gifted Donald was, and the way he expressed his jealousy was to try to throw Donald off,” said Harmon. “I remember apologising to Donald after a particularly rough night of Chevy’s non-P.C. verbiage, and Donald said, ‘I don’t even worry about it.’”

Glover says: “I just saw Chevy as fighting time—a true artist has to be O.K. with his reign being over. I can’t help him if he’s thrashing in the water. But I know there’s a human in there somewhere—he’s almost too human.”

Since Community – which Friend says Glover quit because he was “too bored to do it anymore” – Glover has won two Emmys, two Golden Globes, and a plethora of other awards.

Chevy Chase has since appeared in a handful of lackluster films.

There was some weirdness between Glover and Girls creator Lena Dunham after he starred on the show.

Glover appeared on the second season of Girls as Lena Dunham‘s black Republican boyfriend, partly, he suspects, to counteract the show’s overwhelming whiteness. When their characters break up, Glover goes into a rant about white girls that was entirely improvised: “Oh, I’m a white girl, and I moved to New York and I’m having a great time, and, Oh, I’ve got a fixed-gear bike, and I’m going to date a black guy and we’re going to go to a dangerous part of town.”

Lena Dunham said that she later emailed him to say, “I hope you feel the part didn’t tokenise you” and he replied, “Let’s not think back on mistakes we made in the past, let’s just focus on what lies in front of us.”

Glover has been exploring issues of race pretty much his entire life.

There’s a fantastic story about his NYU days, when Glover wrote a sketch called Black Peter Pan, about a Pan trying to persuade the Darling children to follow him to Neverland, but they’re afraid, because he’s black. “Donald played it so full of hope and wonder in the face of Wendy and her brothers’ racism – totally committed, completely hilarious,” said Owen Burke, artistic director of the Upright Citizens Brigade, an improvisational theatre and training centre whose alumni includes Amy Poehler, Matt Walsh, Kate McKinnon, and Broad City’s Ilana Glazer and Abby Jacobson. “Every once in a while, you get that nineteen-thirties-guy-with-a-cigar moment when you just know, That kid’s going to be a star!”

Honestly, someone needs to bring this sketch to life again. 10/10 would watch.

Please do yourself a huge, huge favour and read the entire New Yorker article here right the hell now.