Something that this whole social distancing and working-from-home thing that the coronavirus has forced Melissa and I to do is once again pour over the stacks of our beloved Dolly magazines from the mid-00s. (Not that we really needed any more reason to look at them again and send each other photos, screaming about what we found in the pages.)

We’ve looked at sealed sections, we’ve lost our shit over the Spill A Secrets, we’ve questioned the fashions, and been entirely baffled by all the “hot guys”, but there’s something we haven’t taken into consideration yet – the advertisements.

So settle in to your self-isolation, grab a tea, and join us as we look back at all the ads in our Dolly mags, because hooly dooly there are some absolute doozies.

MELISSA: So Courtney, one of the best parts of revisiting my old Dolly magazines ended up being the ads. I knew ads from the 00s were fucked, but I forgot HOW fucked. It’s like we had no guidelines when it came to advertising shit to minors or something.

COURTNEY: Oh, totally! I think I skimmed past them a fair bit when I was younger because it 100% wasn’t embarrassing stories or hot band guys, but looking back – hoo boy.
It’s almost as if every advertising company in the country was like “I know this is for teenagers but…sex sells, right?”

MEL: LEGIT. But I also found some ads that were just fucking hilarious. It wasn’t ALL bad, but what WAS bad was very, very bad.

COURT: I’ve definitely also spotted some that are so obtuse that it took me a good look at them before I could even figure out what the fuck it’s trying to sell me.

MEL: Let’s start gently, shall we?

COURT: Sure, but also how is this an ad for HIGHLIGHTERS? 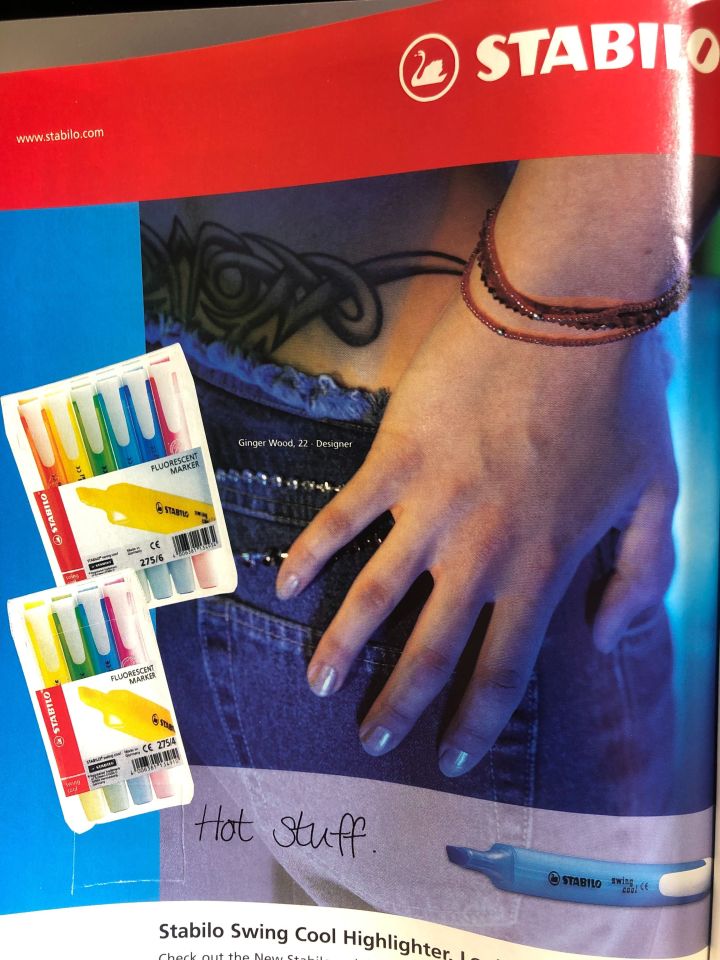 MEL: HAHAHAHHAHA I can’t with the giant tramp stamp, what teenager has a tattoo THAT big? It’s a dolphin, a heart, or nothing.

COURT: I don’t understand where a highlighter has been used in that whole photo. On her…nails?

I wonder how many people saw this and thought “wow…those highlighters are so cool.”

MEL: “Highlighters can give me a permanent black tattoo on my ass without needing mum’s permission.”

COURT: “Highlighters can make my bum look this good in lowrider jeans, wow!” 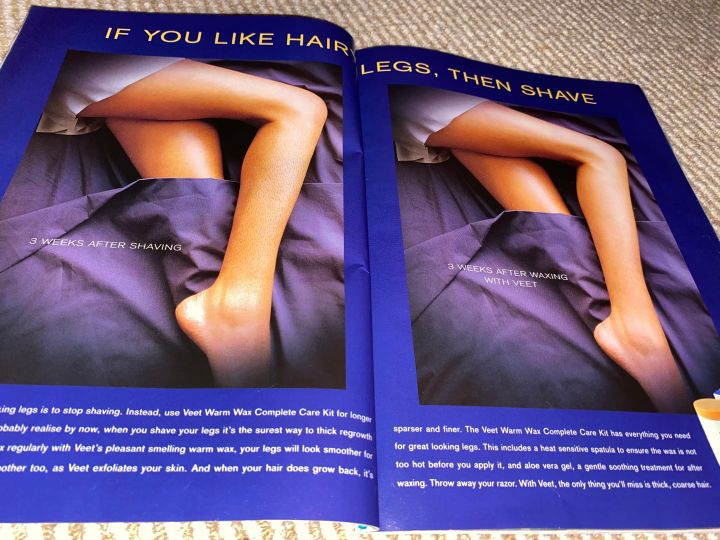 COURT: I’m not proud of how long that took me to understand.

MEL: I remembered this ad VIVIDLY. Isn’t it wild how dramatic we were about *gasp* having hair regrowth on your legs?

COURT: Oh my god, hair removal was like the prime target ad.

MEL: “If you want to LOOK DISGUSTING then SHAVE” it may as well have said.

COURT: I found this absolute doozy too. 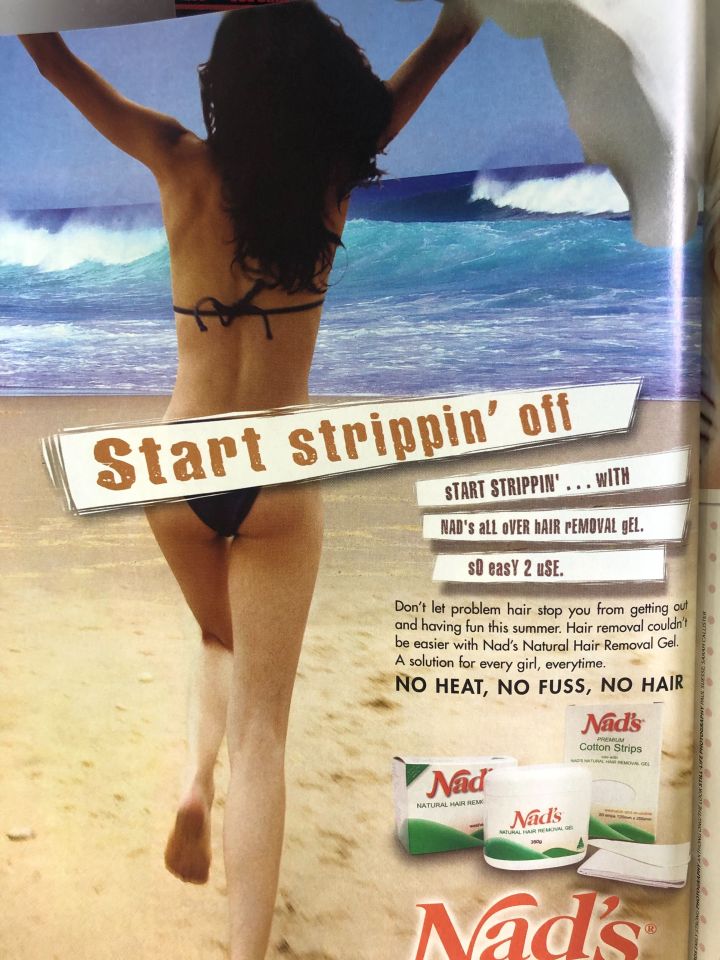 COURT: May as well say IF YOU’RE HAIRY JUST KEEP ALL YOUR CLOTHES ON.

COURT: What even is that!

And how’s the scattered font on the side there. I’m just getting irrationally angry at Dolly magazine ads from 2004 here. Normal stuff.

MEL: I feel like all the hair removal ads show how far we’ve come in the last few years.

That scattered font even more so, actually.

COURT: Speaking of ads that make no sense, how’s this one for Hot Options. 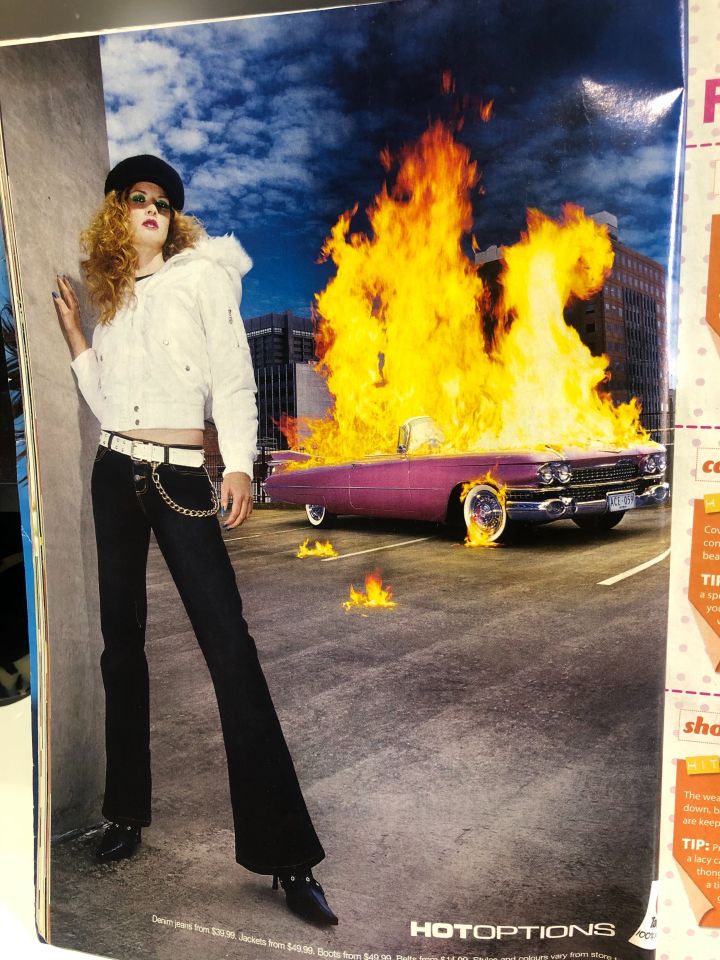 MEL: You too can commit arson in these flares.

COURT: Look fabulous while doing Serious Crimes, only from Target.

Also please, stew on this one. 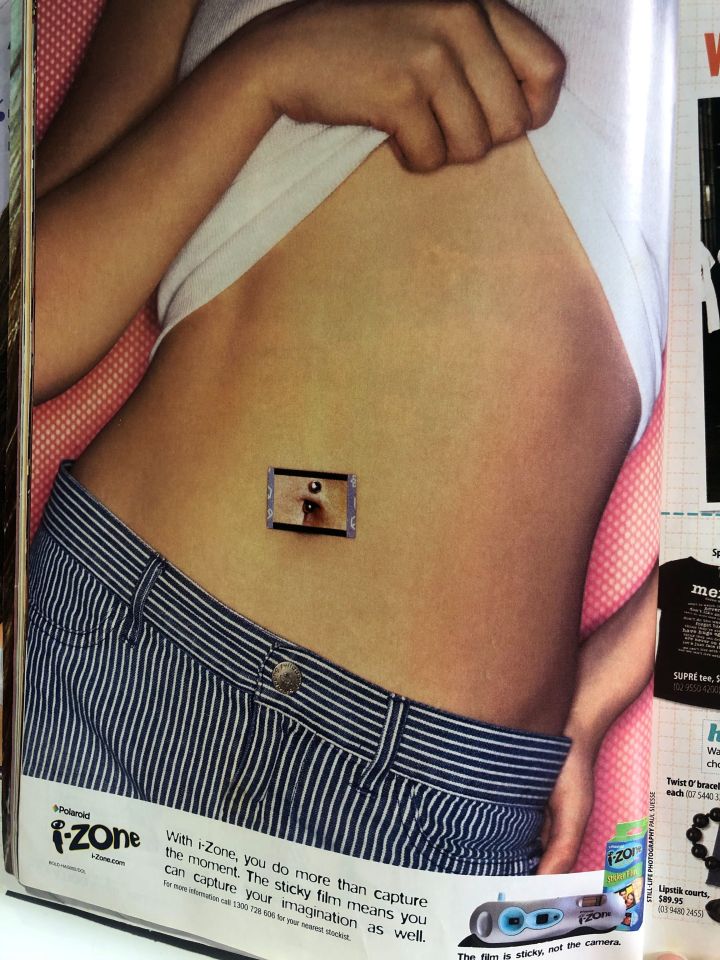 MEL: I remember this one! Damn, I wanted an i-zone so badly.

COURT: Me too, but also how’s how it’s like “capture your imagination” and its like someone else’s pierced belly button and they also seem to have like heaps older skin?

MEL: Yeah like what exactly are you saying here, i-zone. Go peel someone else’s stomach skin off and paste it onto yours if mum won’t let you get a belly ring? 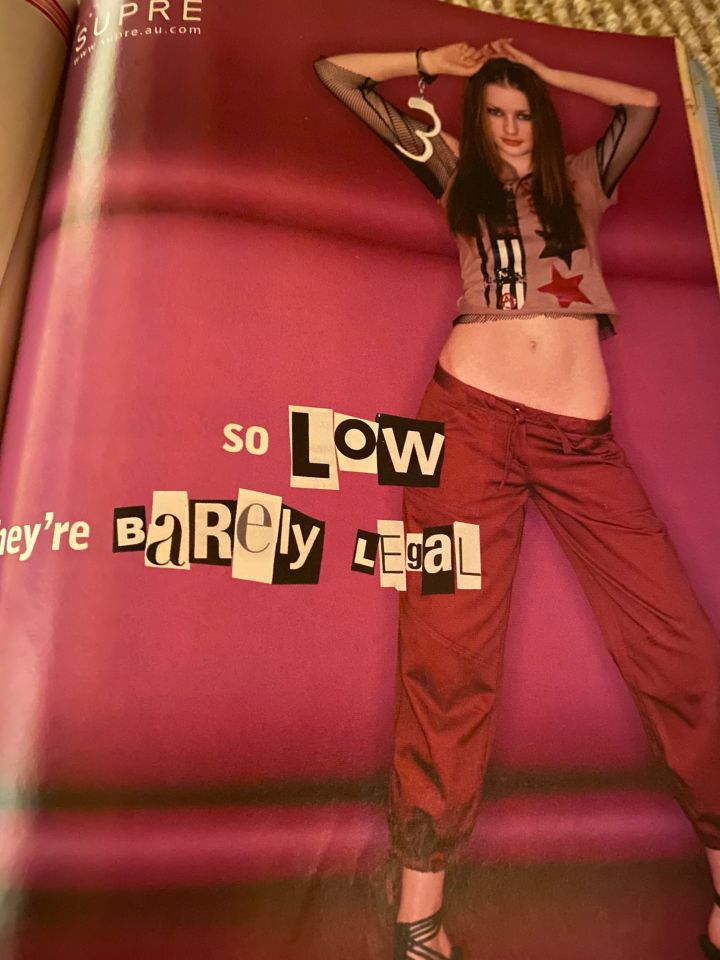 First of all, what in the fuck.

MEL: Ok so, we all knew Supré was a numero uno culprit for inappropriate ads (and clothes) back in the Noughties. But this saw me spit out my arvo coffee.

Like HOW did this get through the ad watchdog?

COURT: The handcuffs? The text that looks like a ransom note????

MEL: I mean, on a far lower level of alarm – the entire outfit. 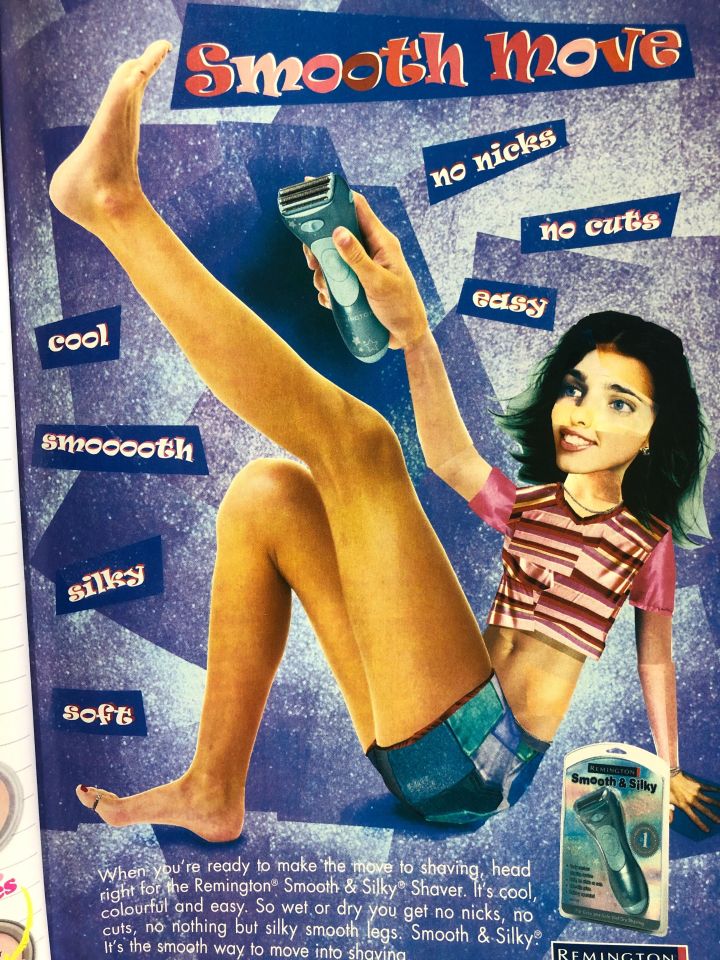 COURT: What is…all of this.

MEL: I don’t… why did they peel half her face off?

COURT: Why does this look like Angela Anaconda gone really wrong?

MEL: YES! There’s no correlation between the scary collage lady and shaving, at all.

COURT: “smooooooth.” It looks like a weird pre-memes meme. 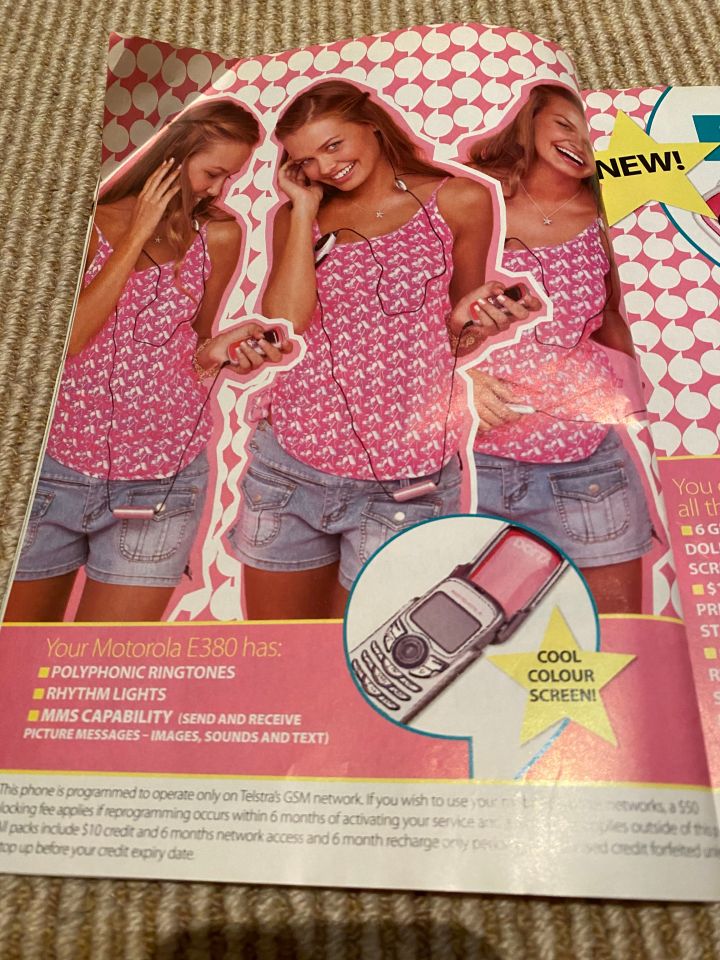 MEL: They are also maybe the same person, we don’t know. Anyway YES its baby Lara, advertising a flip phone of course.

COURT: Jen Bingle, Lara Hawkins. Have we seen them in a room together? NO. (Probably yes we have.)

But here she is again! 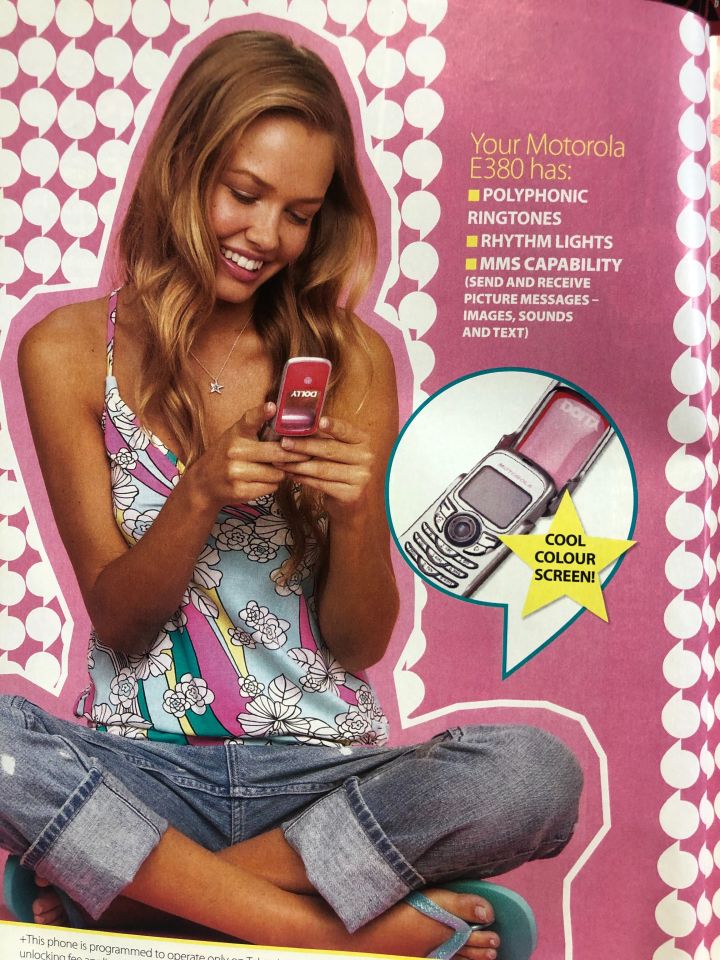 MEL: She loves her Motorola flippy! She must participate in all flippy phone ads! 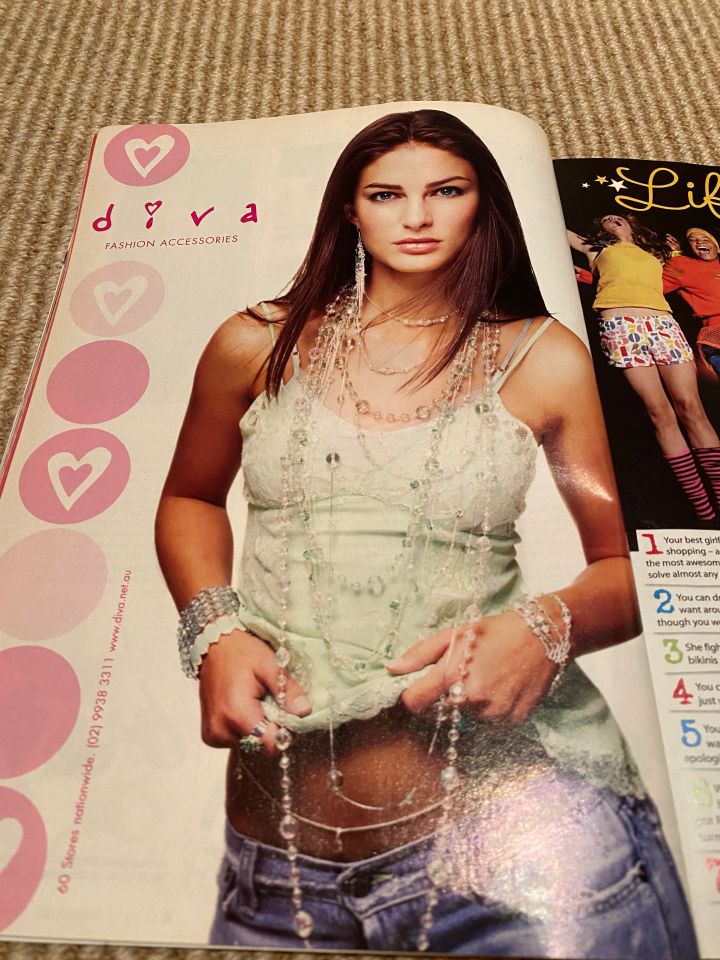 MEL: Okay, how alarming is it to look at the necklace layering trend a decade later. WHY DID WE DO THIS.

COURT: God, that trend should have come with an OH&S warning.

MEL: Sigh though. I miss Diva.

COURT: Where else could you buy enough bangles to cover you from wrist to elbow for $10?

MEL: Can we quickly discuss the extremely, alarmingly weird ads from the back of all Dolly magazines? Because hands up if you signed your mum’s credit card up for this bitch: 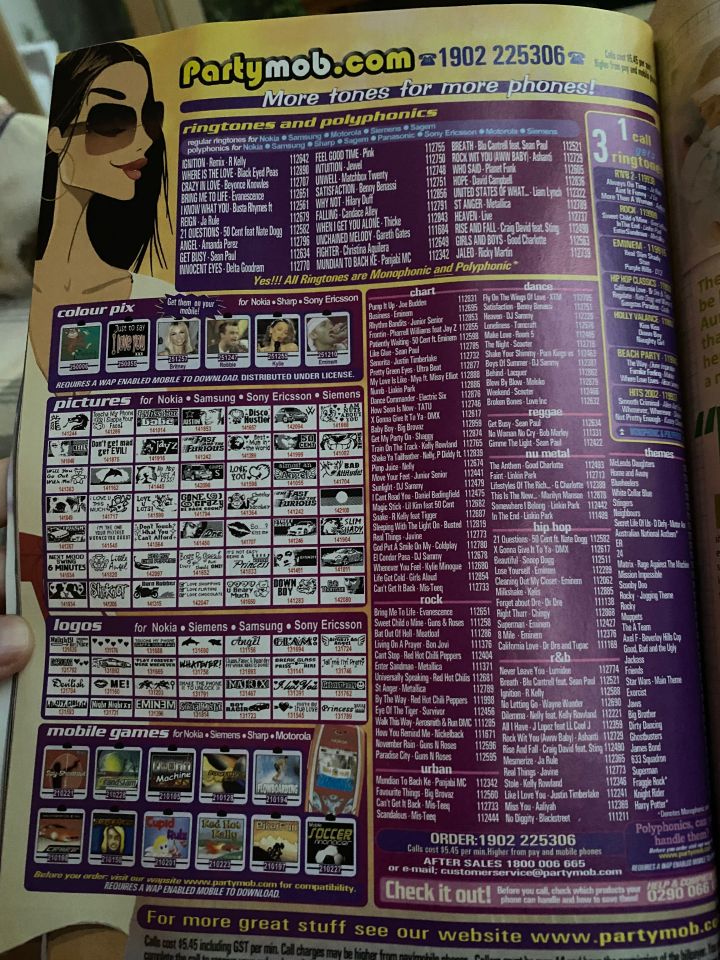 COURT: PARTY MOB! YES! Try to pay $2 for a shitty Eminem polyphonic ringtone, somehow accidentally get signed up for their subscription that sends you 8bit pictures for $10 a week.

Goodbye, all my credit ever.

COURT: Okay just one more, because it is possibly the most cursed ad I have ever seen in a magazine. Not even in Dolly magazines, in print media PERIOD. 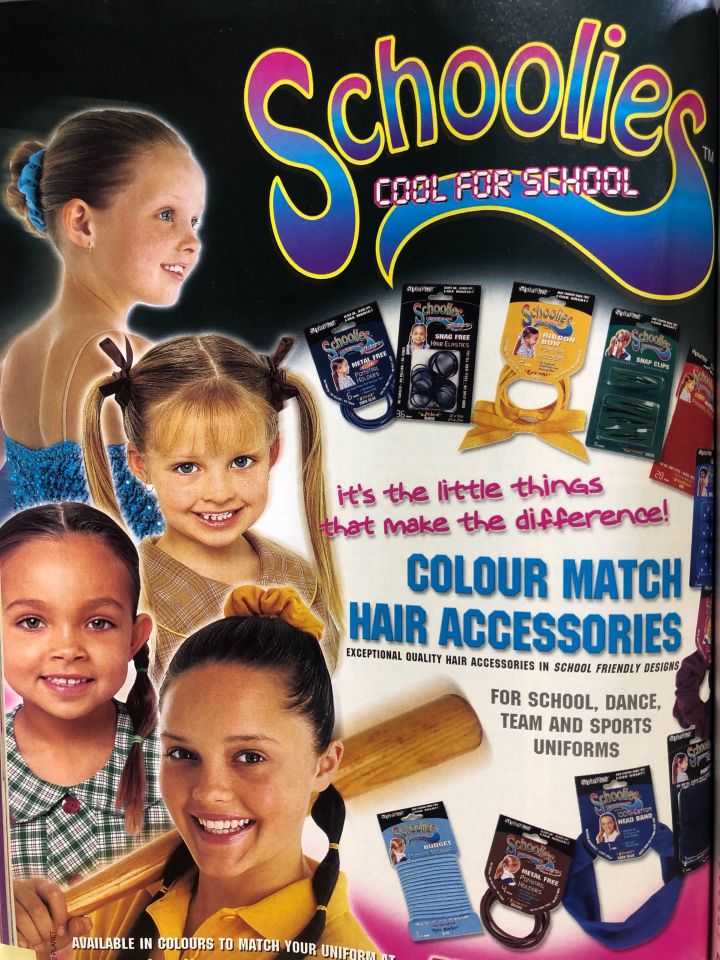 COURT: WHO. ARE. THESE. CHILDREN? 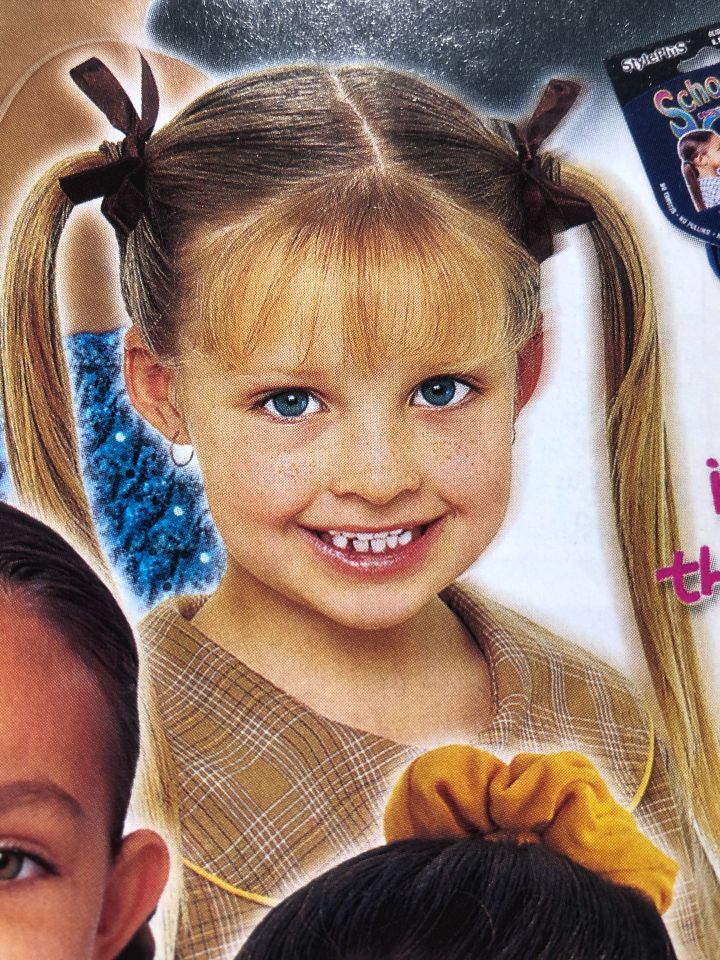 COURT: WHY DO YOU STARE INTO MY SOUL LIKE THIS?

MEL: The one holding a baseball bat feels threatening to me.

COURT: Very menacing energies. I hate it. I hate it so much.

READ MORE
We Dove Into The Scandalous Dolly Doctor Sealed Sections & Wow, 2005 Was A Bloody Time