Ok so you’ve been with us as we revisited the horrible fashions that we somehow were allowed in public with, questioned who the fuck all the apparent heartthrobs were, and rounded up the most fucking unhinged stories between the covers of our old Dolly mags. But get ready for the real gold folks, we’re diving into the ‘Spill A Secret’ section.

Melissa and I spent a good hour howling at them and then sending each other the worst of the worst, which range from “holy fuck” to “how in the fuck are you still allowed outside the house” and I can safely report that these are some absolute rip-snorters.

So grab yourself a wine or something, because we’re revisiting some deeply repressed memories.

COURTNEY: Ok so obviously one of the highlights of my monthly readings of the gospel (Dolly Magazine) was the ‘Spill A Secret’ section.

MELISSA: Agree, I used to flip to that section first thing every month. Why? Why did I want to read the secrets of other teens? Because, as I now realise re-reading them – teens are FUCKING DEMONIC EVIL PSYCHOPATHS.

COURT: There was just something so satisfying reading about someone else’s high-level embarrassing moments, like a rush of secondhand shame and then a lightness of “well thank God that wasn’t me.”

MEL: Agree, but also the ones where they did horrendously mean shit to enemies or friends who wronged them. I totally forgot that was part of Spill A Secret, and it makes so much sense why I loved it now.

COURT: But also some of them are just fucking batshit that surely they weren’t real, right?

COURT: Imagine that being your job. Like you get into work one day and the boss is like “ok Courtney you’re going to spend the next few hours just making up the most unhinged teen shit to fill out the Spill A Secrets.” I’d pop a bottle of wine and go to town. Yes at 9.30am if necessary.

COURT: Some of them obviously were utter standouts. Like, get a load of this one that absolutely did not happen. 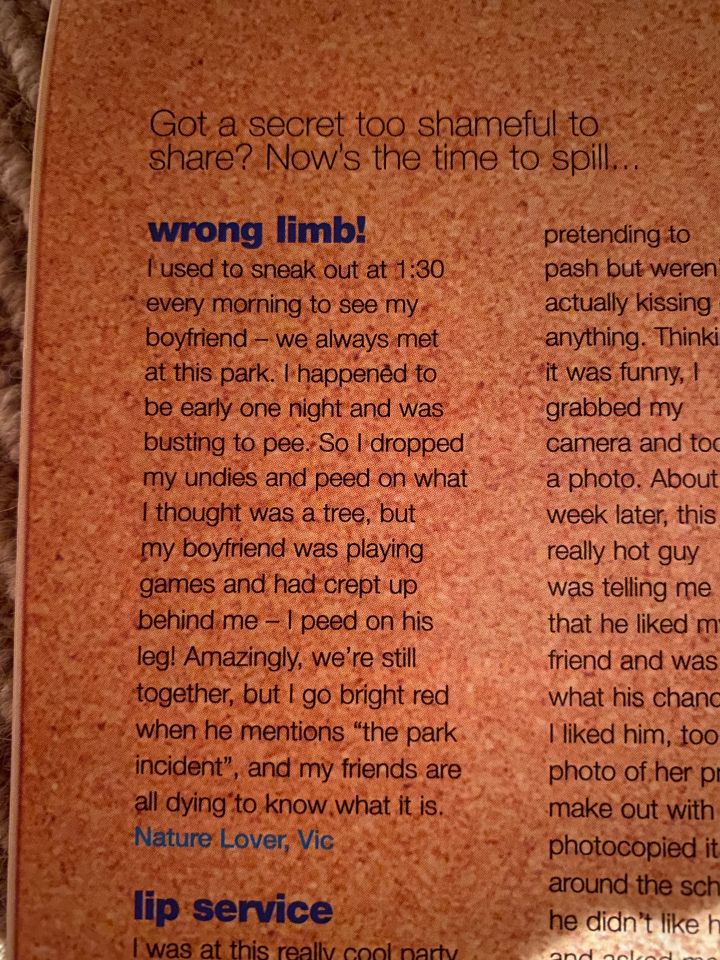 COURT: That 40000% DID NOT HAPPEN. I’m sorry but you would have to be walking around with your eyes closed and also it’s the most pitch black night for you to back your ass up to human person’s leg thinking it’s a tree.

MEL: Yes you definitely did not see your boyfriend’s leg as you were squatting down to piss. Also who pisses ON a tree? As a woman? It’s not necessary! You don’t do it!

COURT: You’d get the most horrible scratches on your cheeks. 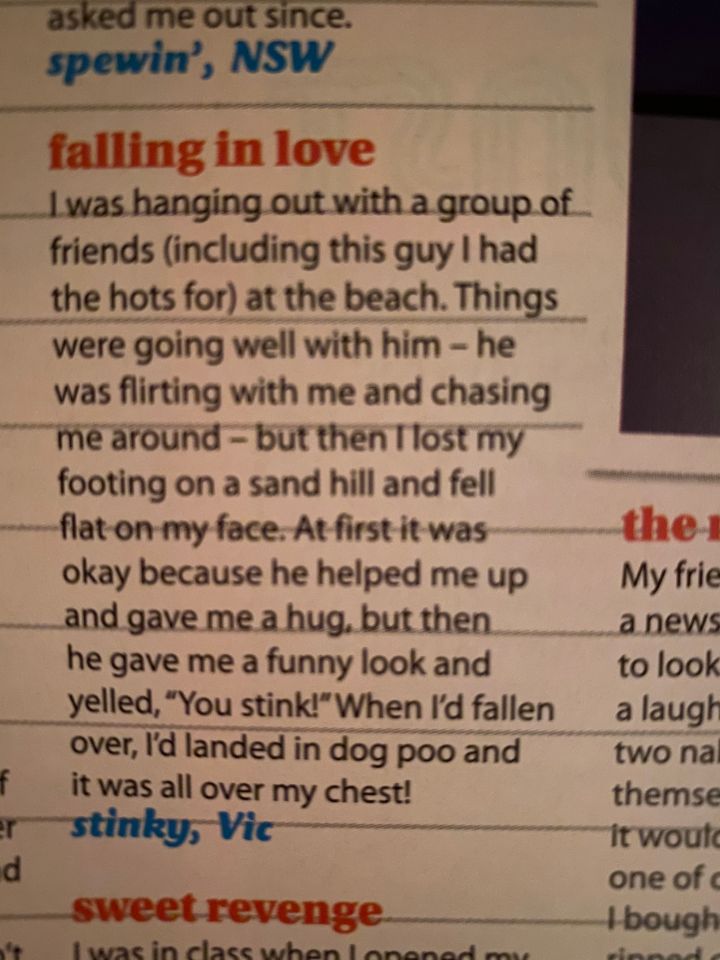 MEL: Ok this one I can believe, and also no thanks time to jump in the ocean and swim off to Tasmania to live my life as a hermit.

COURT: Oh you hate to see it.

COURT: Can I tell you something, I was once playing Spotlight on a golf course as a kid and was sprinting so fast through the trees that I fell into a water hazard at full speed. And the shock of it all made me immediately wet myself.

So I can absolutely believe this one happened, and hey at least HE is also covered in shit after hugging her. They’re in this together.

COURT: I really should have sent that in to Dolly hey.

MEL: I’ve got another one for you. This is peak Demonic Psychopath. 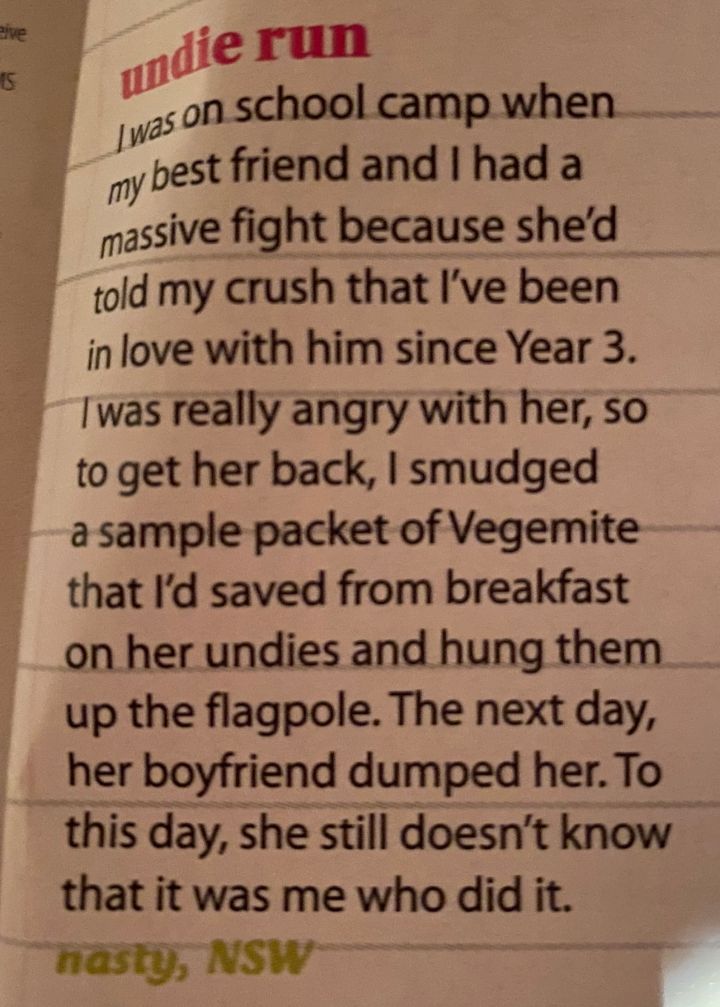 MEL: Oh, my god. This person absolutely grew up to be a serial killer.

COURT: This person grew up to be……….Melissa Mason

MEL: Yes, it was me. No lol it wasn’t but hooooo boy, that is some next level hatred of your best friend right there.

COURT: Hahaha fuck me though, that’s some incredibly quick thinking too. A real McGuyver out there, making do with what tools were available.

If I saw that up the flagpole at camp now I’d be very worried about that person’s gut health. Like, why are you shitting black?

COURT: Here’s a pearler of a revenge attack. 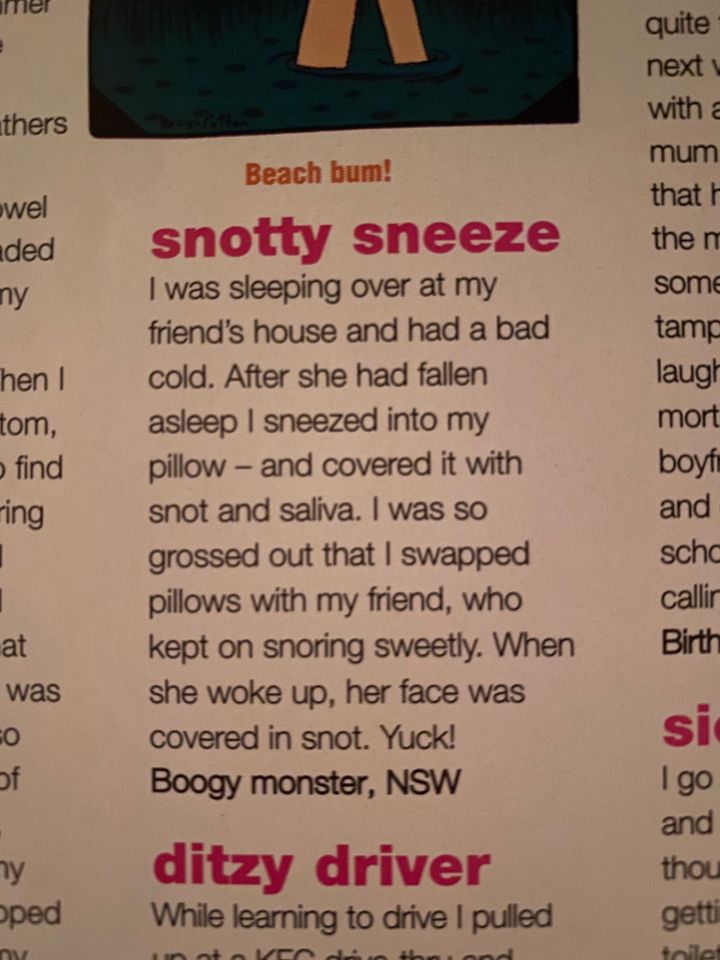 COURT: First of all, why.

MEL: I have so many issues with this.

COURT: Secondly, how the fuck did they get the pillow OUT from under their head and swap it with the Booger Pillow without waking them up? Was ‘Boogy Monster’ from NSW actually Indiana Jones?

MEL: I question the authenticity of this story, big time. But I also question the sanity of whoever came up with this even if it IS fake.

COURT: It was some stoked intern on their fourth wine at 2pm, spinning the big ‘Spill A Secret’ wheel like “Best friend sleepover” *spins wheel* “snotty pillow switchout!!!” 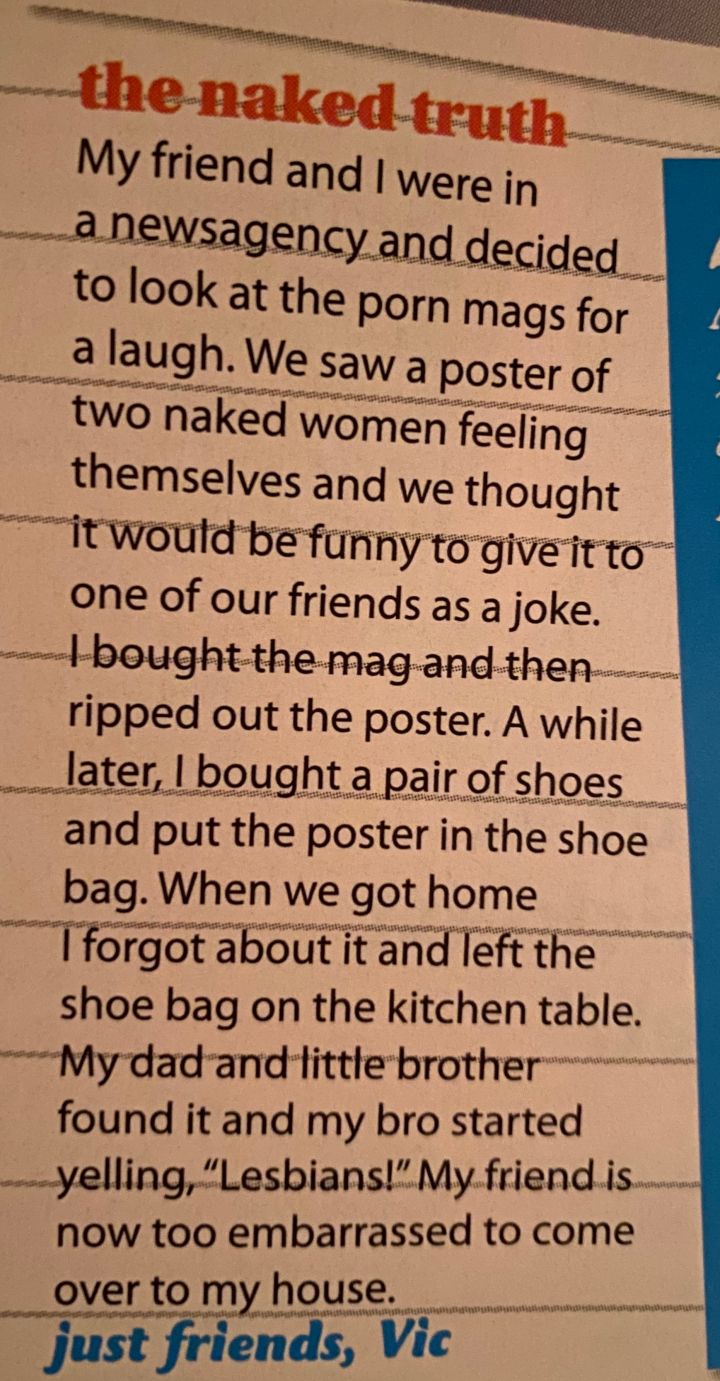 MEL: Imagine being this kid’s dad and finding a graphic lesbian sex image in their shoe bag.

MEL: I also love how the FRIEND is too embarrassed to come back to her house, but we get no word on how her dad dealt with that whole scenario.

MEL: It’s SO SPECIFIC! That takes so much planning!

COURT: First of all how DARE you ruin Kiara’s new white mini do you KNOW how long she had to sweet talk her parents into buying that for her?????

COURT: Ok this also reminds me of a time when I was dancing at an underage disco and I went for a huge slutdrop (I was like 13, why) and I split my pants right up the asscrack. Melissa I hate this it’s bringing back a lot of repressed memories of me continually embarrassing myself in public.

MEL: When I was 25 I did a huge slut drop and split my white faux leather skirt up the ass crack! That memory is too recent.

COURT: Yeah you can’t send that one in to Dolly, sorry.

MEL: I ended up turning it to the side and continuing my night.

Side note, I need to know what “Band Aid Soup” was. But in a very real way, never tell me. I think I’ve got the gist of it there and that is more than enough.

COURT: I also need to know what one is titled “BALLS something something.” 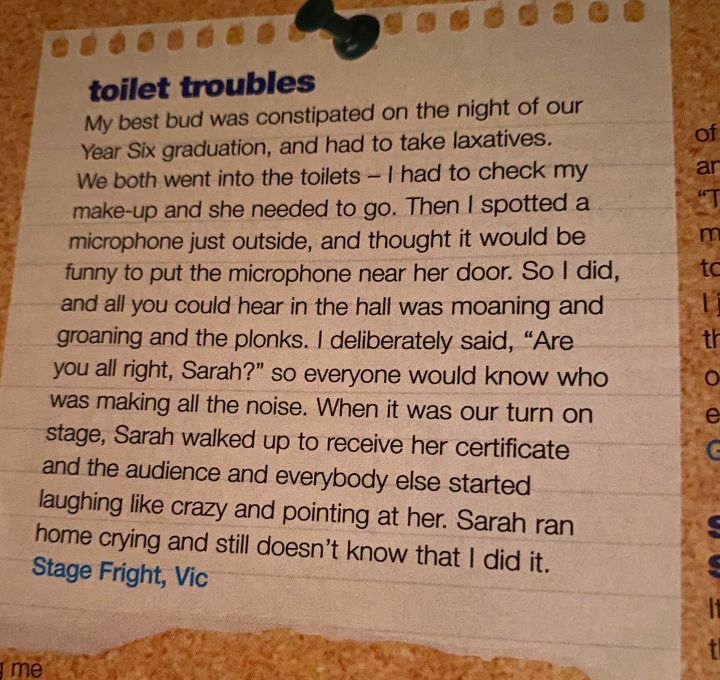 MEL: Courtney, why does everything involve shitting?

COURT: FIRST OF ALL opening with “My best bud was constipated…” is insane.

COURT: SECONDLY, why would you take a microphone which probably wasn’t a high-tech wireless one into a bathroom, like how did you get the lead to go that far.

Poor Sarah, it’s not her fault she probably has IBS now

COURT: Ok here’s my last one, which 100% nearly made me dry heave. Are you ready? 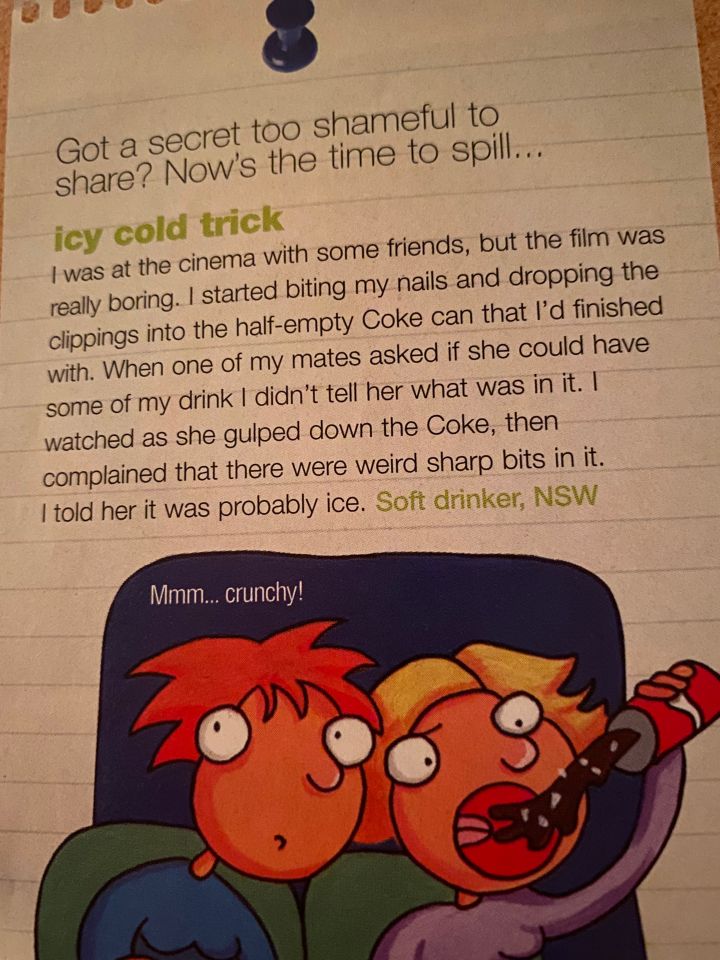 COURT: I just…why. Why are people like this. And also how did they turn out later in life?

Why are you even DOING that, let alone wilfully allowing your friend to drink your nail shards? The fuck is wrong with this child?

COURT: Just be a normal people and drop the nail shards on the floor like the rest of us. Kick them under the seat. Fucks sake.

Thankfully this one doesn’t remind me of anything embarrassing in my own life. I mean, a friend nearly drank a slug on his beer once though. Thank god he didn’t because they can fully kill you.

MEL: What the fuck is your life

COURT: Melissa, I wish I knew and could tell you.

MEL: Why does every Spill A Secret dredge up repressed memories?

COURT: I don’t know. Maybe I need to go to therapy.

I wonder if people are still this fucking batshit but there’s just no outlet like Spill A Secret for them to unload it. 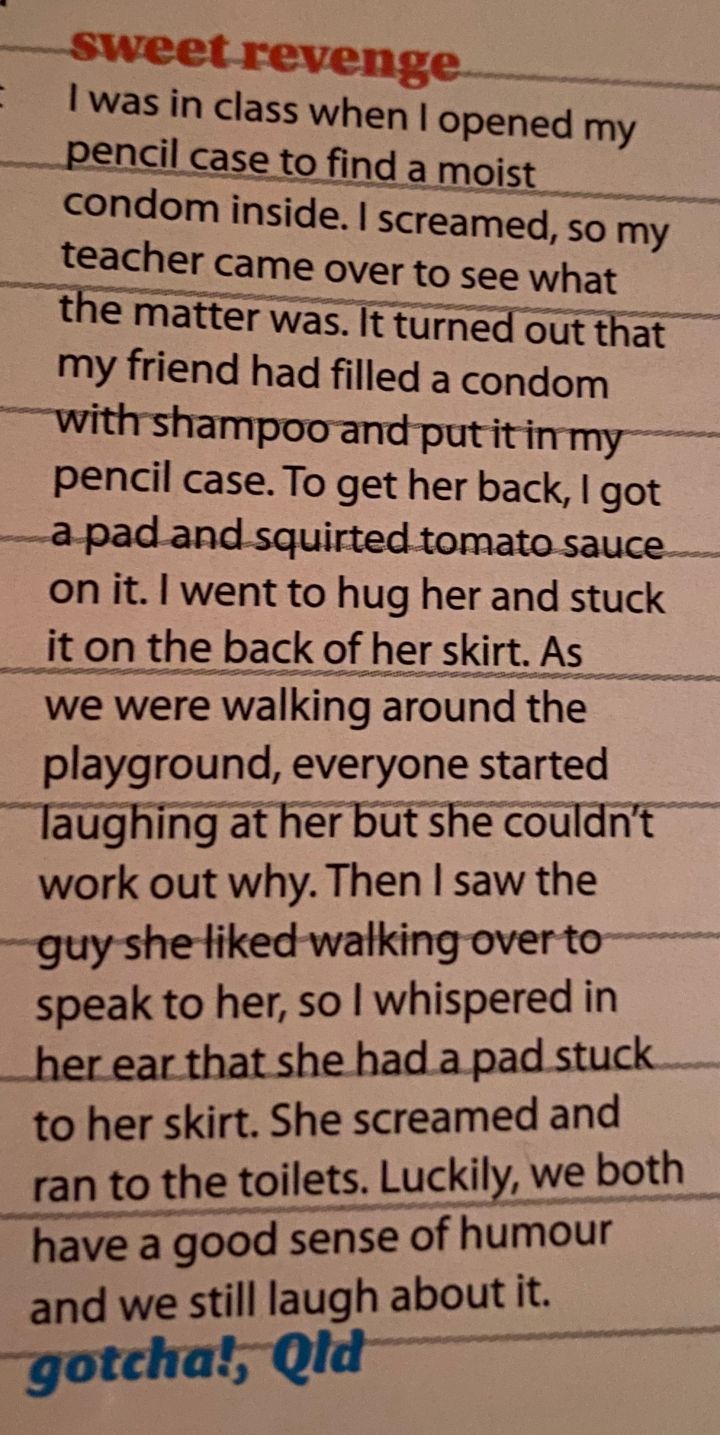 MEL: I simply do not understand how these two stayed friends. Condom in pencil case? Whatever. Sticking a USED PAD TO YOUR FRIENDS BACK NEAR HER CRUSH. Unforgivable offence.

COURT: Honestly considering they’re still mates and can have a laugh about it shows incredible character. But also “moist condom” is a combination of words I never wish to read ever again. Ever ever ever ever.

MEL: No thank you please. 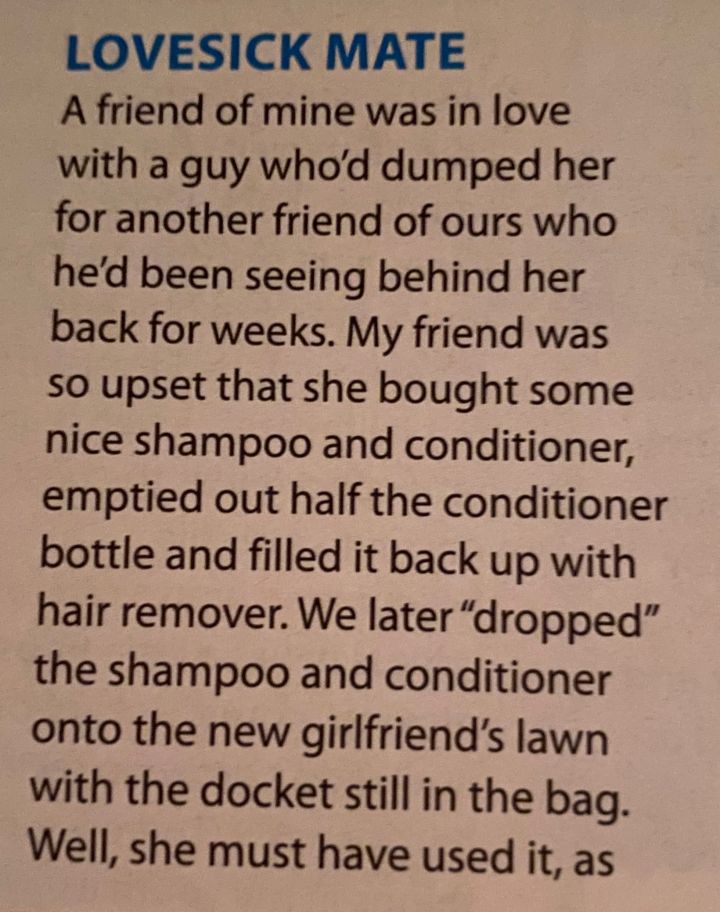 MEL: This one has to be fake, otherwise I’m scared for my life tbh. I cut it off before the finale but you can figure out what happened. WHO DOES THIS.