In Deuxmoi’s latest Instagram Q&A, she got folks to spill the tea about a bunch of rude celebrities and the intel was SPICYYYYY.

After her initial set of IG Stories, more and more folks have come out of the woodwork with stories to share.

Let’s delve into them, shall we?

In the initial set of IG Stories, multiple folks claimed that actor John Krasinski was a “dick.”

Another restaurant worker backed this up, telling Deux: “He is SUCH a dick. I worked at Fred Segal on Melrose for many years and can count on two hands how many celebrities were rude. He’s at the top of the list.”

They went on to rattle off the other rude celebs which included (without context) Christina Aguilera, Reese Witherspoon, Emma Roberts and Vince Vaughn.

Why do none of these surprise me…?

The original Insta Stories started off with a glowing review for internet queen Ziwe.

A Deux disciple asked if Ziwe is “as cool as she seems”, since Deux recently sat down with her for an interview (which you simply MUST watch, by the way).

Deux responded: “Everyone who has run into her in NYC has only had nice things to say about her. My experience with her is that her on-air persona is different than how she really is… not in a bad way, just in an approachable way, if that makes sense.”

She concluded by confirming that “yes, she’s cool.” 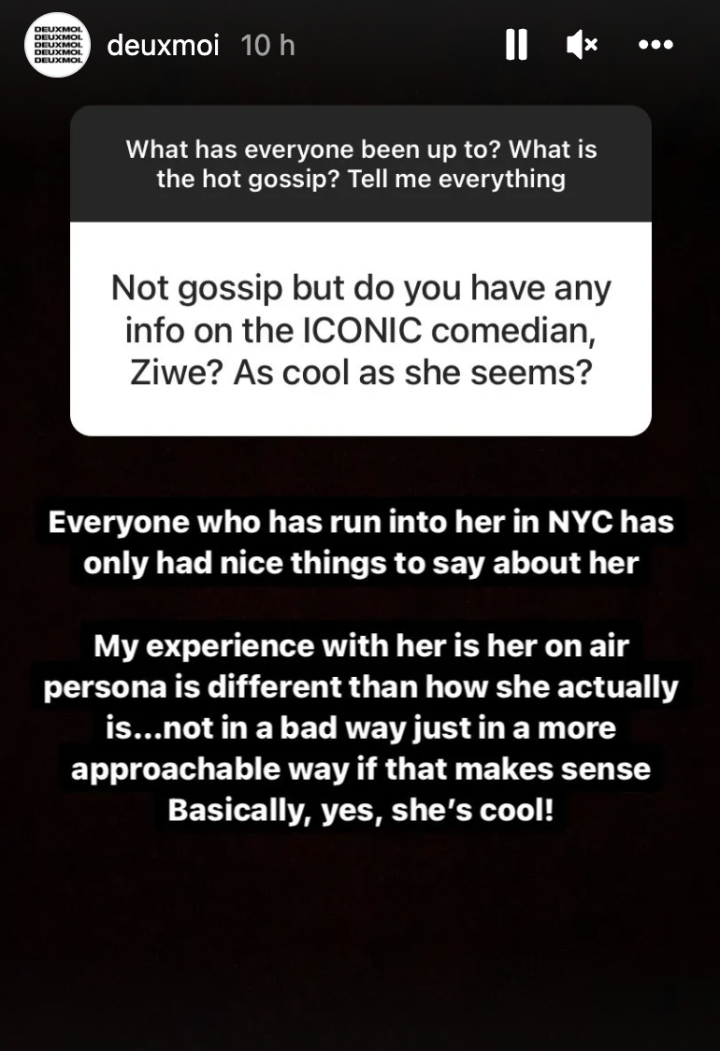 We love to see it!

OK now we’re heading into murky territory, so buckle up.

Another stan asked if Teen Wolf king Dylan O’Brien was “rude” because apparently they’d heard some shit about him.

Deux responded with a firm “DENY.” 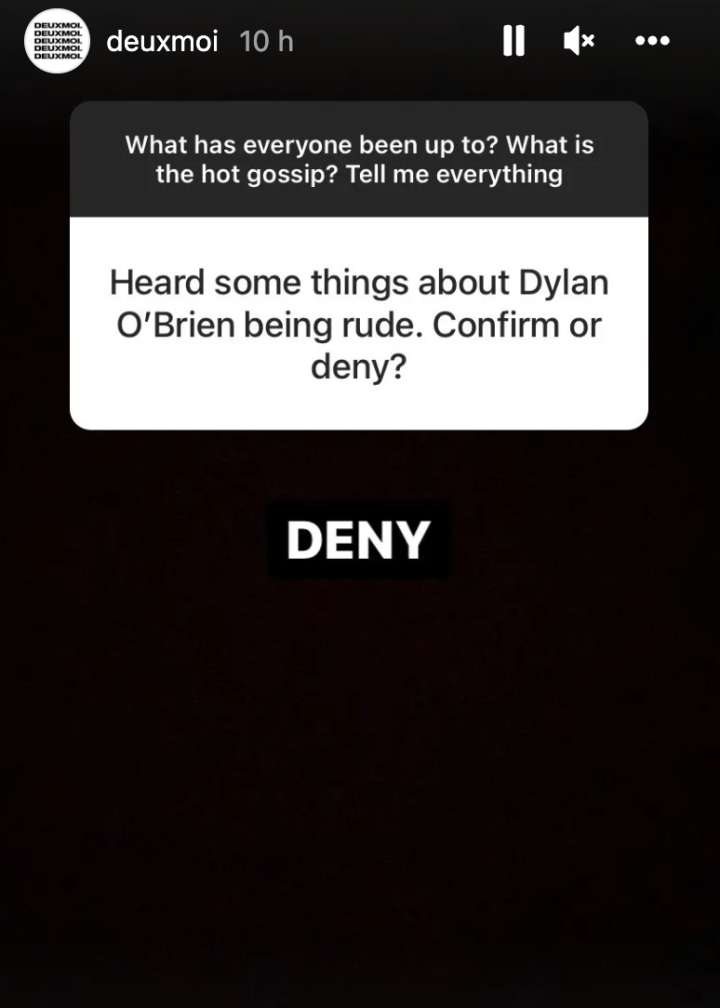 It turns out a reporter had given Dylan a bad rap.

“So you guys telling me that this question is in reference to a reporter who had a bad experience with him?” Deux added in a subsequent IG Story in which she posted a vid of Dylan dancing with a fan.

“Come on… this guy does not seem like a dick.” 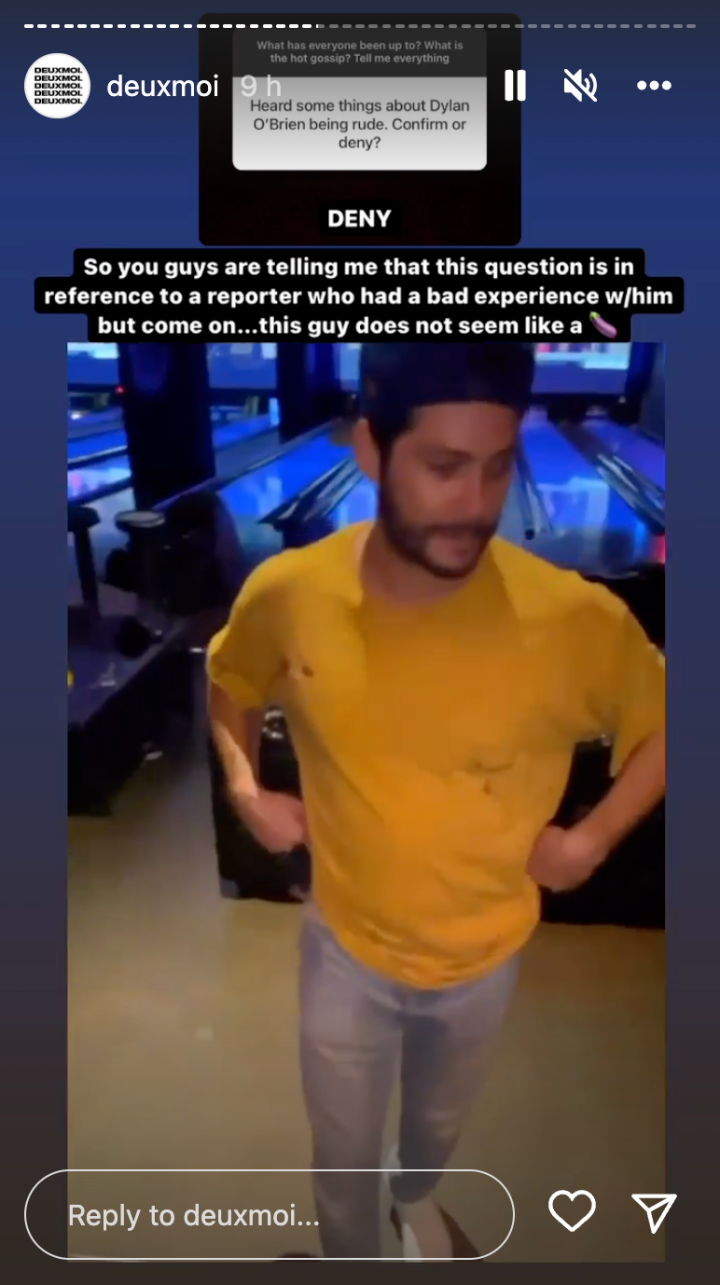 I did some digging to see which reporter had called out Dylan O’Brien in the past and it turns out it was actually Aussie entertainment journo Lisa Kham.

In 2020, Lisa shared a series of TikToks calling out Dylan’s behaviour while he was filming in Australia.

She alleged that during a set visit she attended, Dylan “argued with production” and his general “vibe was really bad and it made me nervous.”

Lisa said when the interview kicked off, he was “frosty from the get-go” and gave her “rude and disrespectful answers” to all her questions.

“I was feeling so uncomfortable, I was on the verge of tears,” Lisa said as she started to tear up in the video.

She added that at that point, he asked her if this was “seriously what you do for a living?” and “he just stormed off.”

Look, love ya Deux, but the fact that Dylan once danced with a fan doesn’t mean that he hasn’t been a total dick on other occasions. Again, ALLEGEDLY.

Have a watch of Lisa’s five-part TikTok series below:

Here’s a nice palette cleanser for ya: someone claiming to know ELVIS star Austin Butler said he’s an absolute sweetie.

“Austin was the sweetest, kindest guy to me back when I was a nobody,” they began.

“He was roomies with my friend back in the day and he was always so welcoming even though I wasn’t part of the cool kids club.

“He never made me feel like an outside. I still appreciate that gesture almost a decade later and I’m happy to see his career blossoming.”

We recently interviewed Austin while he was in Australia and can confirm he is a top notch bloke!

READ MORE
Austin Butler Chatted To Us About His Accent, Aussie Treats & That Time Tom Hanks Got Rona

Aaaaaaaand finally, here’s how the John Krasinski stuff came up.

After a follower asked Deuxmoi about “John Krasinski being a d*ck”, an absolute avalanche of tea was spilled.

First up there was a story from someone claiming to be mates with a person who used to live in the same building as the actor before he landed The Office.

Apparently John Krasinski once knocked off someone’s parking spot and when she called him on it, he said “too bad.”

They added that he was very “unfriendly in general.” 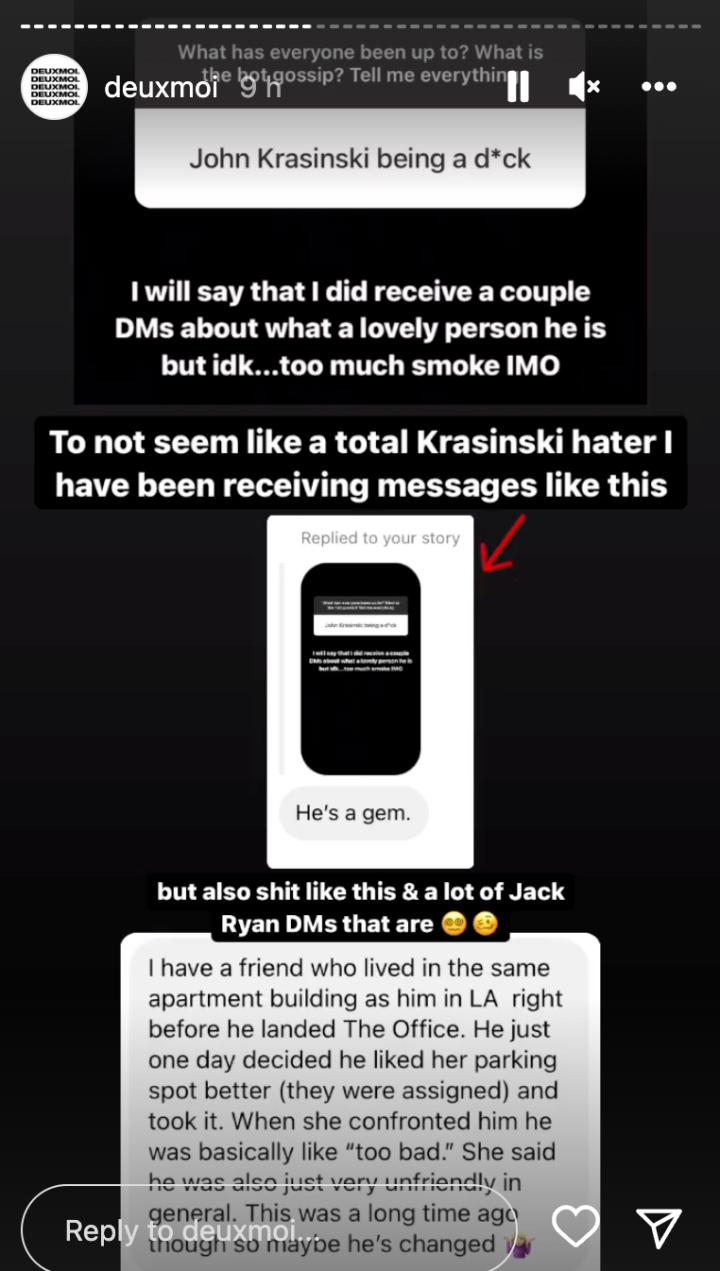 Another follower backed this up, writing: “Can also confirm John Krasinski is a dick.”

“I was on a call where he was screaming at studio executives about marketing. Studio execs. AKA the people giving him money for his movie,” they wrote.

A follow-up person who claimed to have worked with him on a film disagreed with all this, insisting that John is a “great person” and “genuinely kind, very funny.”

They also pointed out that he spent a lot of time flying back and forth from London so “he had a right to be jet-lagged and frustrated when things went wrong.”

And there ya have it!