‘The Dark Crystal: Age Of Resistance’ Is ‘Game Of Thrones’ With Puppets

I sat down to watch The Dark Crystal: Age Of Resistace with some trepidation, worried that the prequel to the Jim Henson classic might not be as dark, strange and scary as the movie I loved growing up. I should never have worried. Not only is the new Netflix series the most beautiful thing I’ve seen on TV this year, it’s also is darker, stranger and somehow more frightening than what came before.

The ten-episode series follows the story of three Gelflings – Rian (Taron Egerton), Brea (Anya Taylor-Joy) and Deet (Nathalie Emmanuel) – as they set out to save the world of Thra, having learned the terrible secret of their rulers, the Skeksis. We’re not talking short episodes, either – each one clocks in at fifty minutes to an hour, so you’re in for a properly epic tale, with big battle scenes and jaw-dropping fantasy sequences.

From a visual perspective, Age Of Resistance is gorgeous. Thra is a sprawling world of murky swamps, snowy peaks and dark caverns, every corner of it teeming with life and detail. The creative team used old-fashioned puppets, wisely only inserting a few touches of CGI here and there, and as a result, the series retains the tactile, lived-in feel of the film. 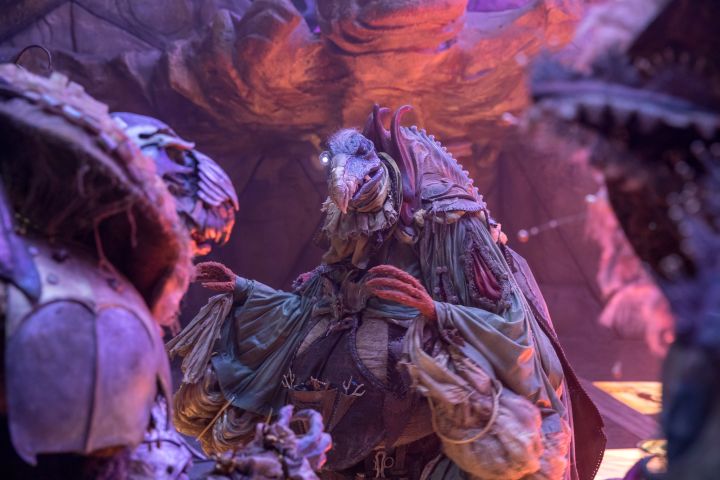 The story, about the Skeksis exploiting the bounty of the planet for their own greed, goes to some surprisingly dark and brutal places. Beloved characters are dispatched with Game Of Thrones-like glee, and there is one early scene that I won’t spoil here, but, let’s just say it was … a real eye-opener. This is a show that actively wants to traumatise you, and it will if you let it, but in the best possible way.

Earlier this week, we spoke with artist Brian Froud, who designed the original film with wife Wendy, and who worked on more than ninety puppets, large and small, for Age Of Resistance. We asked him about the work that went into this prequel, about some of the darker moments, and about the message he wants people to take away.

Alasdair Duncan: How does it feel to be putting a new Dark Crystal story into the world after all this time? Are you nervous?

Brian Froud: We did the first one so long ago, and though we tried to get a new one going again, we never really imagined it was going to happen, but here it is, we’ve done it again! It’s bigger and better than the original. The visuals in this are quite extraordinary …we’ve taken our old technology form the first film, the puppetry, and augmented it with new technology. It has an excitement to it, it’s exhilarating, and looking at it takes my breath away. It’s slightly daunting because you don’t know quite what the reaction’s going to be, because it looks and feels different to what’s contemporary now, but we’re hoping for the best!

AD: Watching Age Of Resistance, I was struck by how similar it looks to the first, it’s like stepping right back into that same world …

BF: Yeah, and there are certain shots in the Netflix series that look like we’ve cut them out of the original and pasted them in, because it’s authentically visually the same, and that’s exciting. The good thing about the series is that we’ve been able to spend more time on it – we’ve been able to expand the world. For the first film, we built the world first in our heads and the story wondered through that, but now we get to see more of the world, and understand more of the breadth of the story, it’s really dramatic. What we discovered with the Netflix series was how far we could actually push the emotion of the puppets and what they could express. 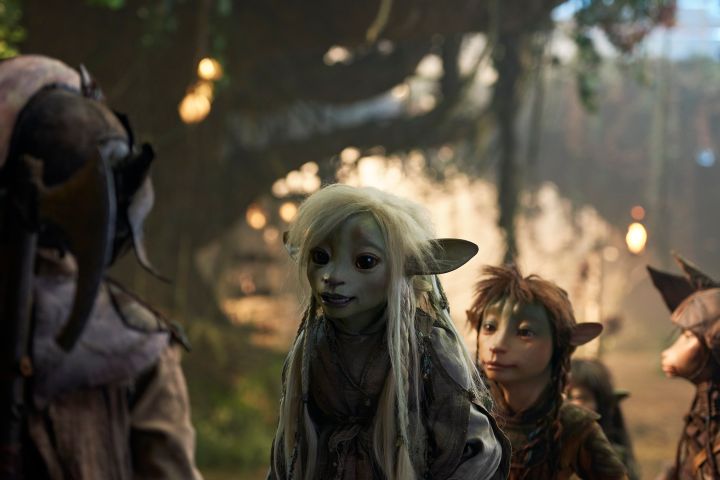 AD: The world of The Dark Crystal is massive and every corner of it feels alive – what kind of work goes into creating something like that?

BF: Jim Henson, who created the original film was a big fan of the sacred sites of England, and the mysticism of the land we live in. When we made the film, he came to visit my wife Wendy and me down in Devon where we live, and he said ‘I want this feel in the film’. I knew that when I was designing everything it had to feel ancient, there was an old civilisation, one that was not necessarily of this Earth, but of a mystical planet. When I worked on the first one, I put in lots of geometry and symbolism and numbers, that sort of thing, so in my designs, everything relates to each-other. There are lots of threes in the film – there are three suns, and there are creatures with three eyes. You see that echo all through the film.

AD: Was it the same with the TV series?

BF: Well, I’ve done lots of designs from the world of The Dark Crystal through the years, but when it came time to do this one an Netflix said they wanted puppets, I just started again. We knew we needed to recreate some old characters and reproduce them, but there were lots of new ones. When I started to draw designs for the TV series, it all came out of my head, I didn’t use any references, I just tried to feel what the essence of the planet Thra is. It’s all rhythms and shapes and forms, it’s all organic.

AD: In the original film we met two Gelflings, but in the series we meet may different clans and tribes from all over the world – how did you go about differentiating them?

BF: The clans live in different parts of the planet Thra, some come from the sea,  others from underground, so there are differences there. That was the leaping-off point, but I ignored that in the end. The main idea that I kept coming back to when designing the series is that everything on this planet is alive. Jim Henson was very keen on us understanding that the earth is alive, and we’re all part of it, linked together. In the world of Thra, rocks move and sing, plants are animals and animals are something else. Any material that the characters use to make their clothing, for example, is not a material that’s of this earth – it’s not wool or cotton. The materials might glow or sing or move, so I worked hard on making shapes and textures and letting those things define the characters. 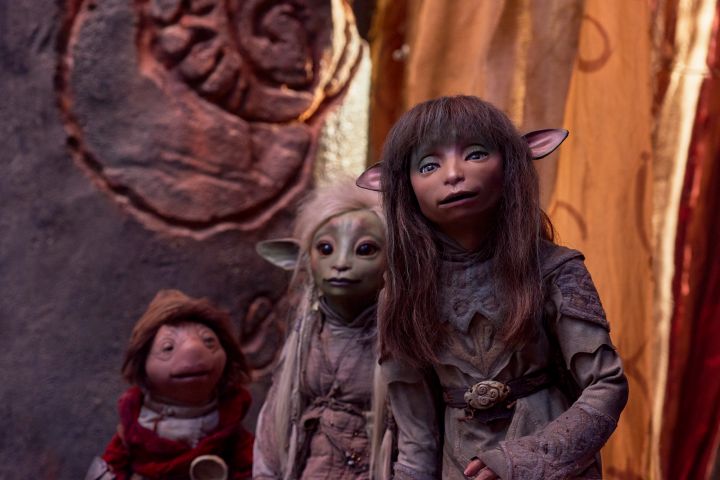 AD: The Skeksis’ exploit the world of Thra and greedily take what they want, and their greed feels very much like an allegory for humanity as we currently are. Was this what you set out to say?

BF: Well, Jim Henson was really fascinated about good and evil and what you do in the world to do good. The original idea was that the split between the Skeksis and the Mystics came about because the desire to do good had created the desire to do bad. We’ve continued with that idea in the series. The Skeksis are absolutely outrageous in their selfishness. I think it’s interesting, because though the original film is nearly 40 years old, the world has not changed. We genuinely wanted to do the original film to change the world, we wanted to impart a positive message about how we all fit in this together. We’ve tried to do that again with the series, but the world is just as bad as it was. We’ve tried to emphasise that message more. This series feels very contemporary to me – it feels like an echo of what’s happening in the world. It’s a fantasy thing, it’s mythological in its contents and visuals, but something like that can articulate  real world of real-life problems.

AD: I was stuck by how brutal The Dark Crystal: Age Of Resistance is at times, like one particular torture scene early on, involving a beetle … When designing the new series, did you just decide to embrace that darkness?

BF: Well obviously the episodes are written by someone else, and I did find some of that troublesome, however, what’s fascinating is that because you’re working with puppets, you can touch on things that you can’t with people. The characters go on a very dark and emotional journey throughout the series, but when it goes really dark … Put it this way, I think you can actually illuminate some of the darkness of humanity in a very strong way when you’re working with puppets, because there’s always a thing that mitigates it. I always think of that when I’m designing them. Running through the series, there’s hope, there are threads of love and companionship … there’s an extraordinary message of hope that mitigates some of the darkness. 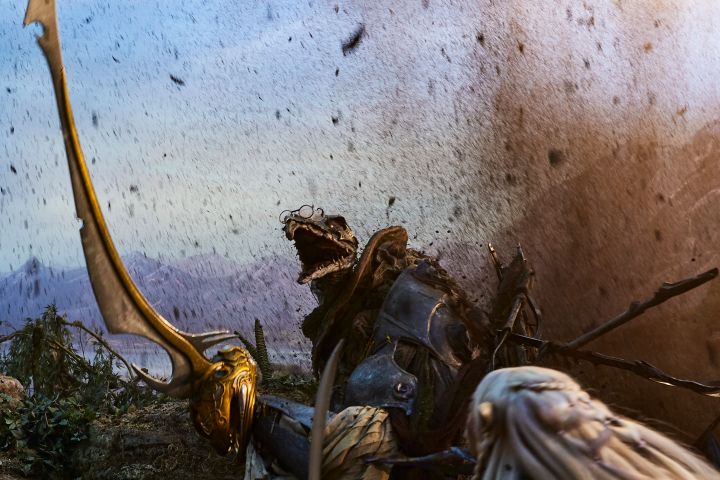 AD: Even though the Skeksis are quite horrifying and do some quite terrible things, they are also funny in their way …

BF: The Skeksis are monstrous, but to me they are also sublimely beautiful, because they always tip into ridiculousness, they always are dis-empowered by how funny they are.

AD: Is there one message or idea you really want people to take away from Age Of Resistance?

BF: Over the years, when I’ve been out signing books or talking about The Dark Crystal, people always say how it scared them as children, but that they’ve always loved it. One thing that strikes me is the number of people who say that, because of that film, they went on to do something artistic – be is writing or art or crafting things or getting into filmmaking. It’s always a creative response. When you look at the Netflix series, what you see is art on the screen, because of the care that everyone put into making these creatures, and the skills and craftsmanship. We worked really hard on getting every detail just right and on pushing boundaries, technologically and visually, and so I hope we can make people say ‘I want to make something too’. I just want to inspire people to be creative.

The Dark Crystal: Age Of Resistance is streaming now on Netflix.