Hoiii peoples! I’ve come to Dan(ce), so don’t get jiggy with me, Kim. And by Dan(ce), I mean that great hunk of spunk Dan Andrews has been spotted in my favourite Kath & Kim Facebook group, Da Kath & Kim appreciation society, and I loike what I soiee.

One of the lovely peoples pointed out that the Victorian Premier is a member of the private group and, as she put it, he’s “a man of foine taste.”

Have a geeze at the evidence below via a fan named Laura Golet (good guuuurl, Laura): 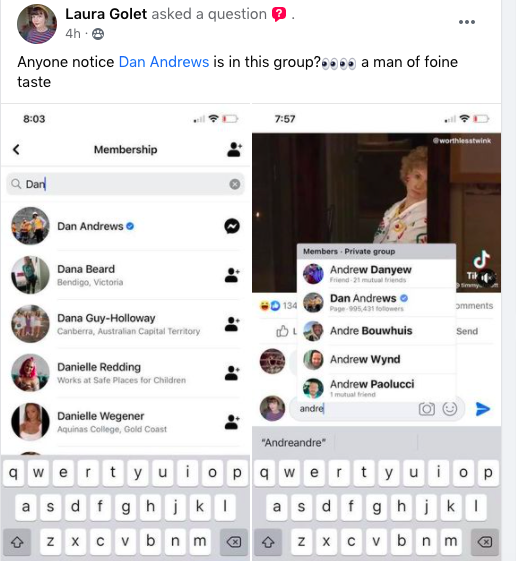 Other members of the Kath & Kim Facebook group seemed to be pleased about having Dan Andrews in their midst and they’ve flooded the comments section of the post with hilarious reactions.

Here are some of my faves:

“Well, he’s a great hunk of spunk so what’d you expect?”

“He can park his boat shoes under my bed any day.”

If you’re a fan of the foxymorons from Fountaingate and you’re not in the FB group, Da Kath & Kim appreciation society, then honestly, what has she come as?

The group is an absolute goldmine of Kath & Kim content and frequently blesses my Facebook feed with noice, different, unusual post. It’s been an absolute ray of sunshine in my life, particularly during the trying times that we’re in, I feel.

Everyday I jump onto the group and I look around and see people I barely know and think ‘WOW, that’s beautiful.’ True story.

Good to have you aboard, Dan.