Chrissy Teigen, incredible human full of jokes and joie de vivre, loving wife and mother, has spent the week just gone roasting both herself and her bae John Legend – but mostly bae – on Instagram, because of his likeness to beloved children’s TV character, Arthur, the aardvark.

Back in Feb, the internet lit up with memes likening Teigen’s hubby and father of her children, to the cartoon, and well, Chrissy babes loved it.

John when you tell him he looks like Arthur pic.twitter.com/0NW3NDtAb1

Since that time, Teigen apparently gave their two-year-old daughter, Luna, an Arthur doll to play with, posting a picture on the ‘Gram on Wednesday of their bub clutching the toy, with the genius caption: “Luna and daddy“.

Teigen went on to explain that the doll was actually hers from when she grew up in Utah in the late ’80s – and that her mum had held onto it. The comment started off pretty sweet… 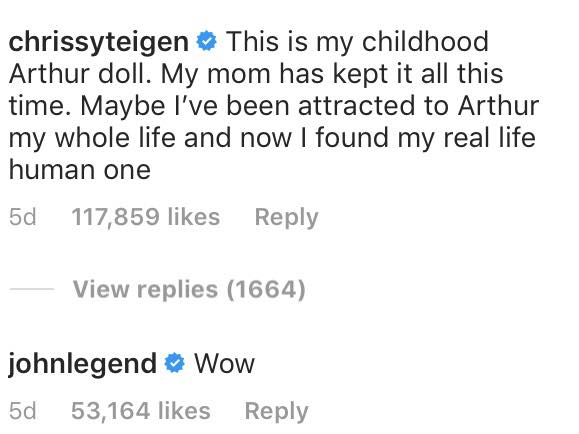 Then, on Sunday, she came back to the subject, sharing artist Deen Ally‘s illustration of Legend in place of our beloved aardvark friend and reminding everyone of the iconic theme song.

And I say hey HEY what a wonderful kind of day. Where we can learn to laugh and play. And get along with each other. You’ve got to listen to your heart, listen to the beat, listen to the rhythm, the rhythm of the street. RP @deenallydesigns

And while Legend was… not into it, celebrity friends John Mayer and Karlie Kloss 100% were. 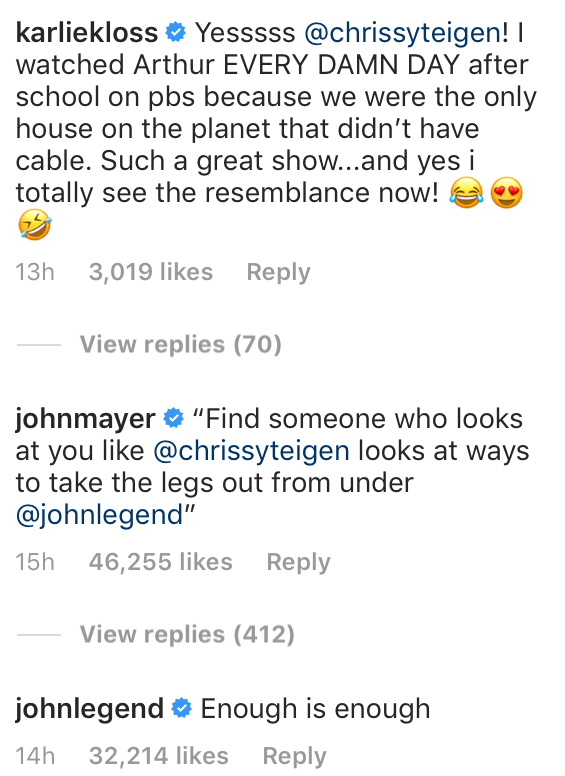 But the ribbing did not stop there, although for her pièce de résistance Teigen included herself in the joke. Posting a picture of herself and Legend at the 2016 American Music Awards, Teigen ‘found her cartoon soulmate’, and for Chrissy, it’s Peter Griffin from Family Guy‘s great aunt, ‘Legs Go All The Way Up’ Griffin. As for the Legend lookalike, it was Arthur’s dad, David, which… is apt too actually.

Omggggggahhhh “legs go all the way up” girl nooooooo

A mistake she soon realised though, ‘cos she obvs meant to post Arthur:

Later that very day, Legend had the last laugh: he took to Instagram himself to post a picture of Luna with his father, Ronald Lamar Stephens (yes, John Legend’s real name is in fact John Roger Stephens), captioned  “Luna and Grandpa (and a stuffed animal whose name we shall not speak)“.

We fucking love this family.