Chris Pratt has taken to Instagram to maybe-jokingly plead with his soon-to-be co-star Chris Hemsworth to stop being so damn beefy, because it’ll make look bad by comparison.

Last weekend, it was announced that Chris Pratt would play his Star-Lord character alongside Hemsworth in the upcoming Taika Waititi-directed Thor: Love and Thunder.

The film is due to start shooting early next year, but it seems Pratt’s a little concerned about how much work he’ll have to put in before then.

This week, Chris Hemsworth posted a characteristically Hemsworthy photo of him pushing around an enormous donut with his massively swollen arms as part of a workout.

“Hey bud. Just heard from my trainer and he needs you to stop working out because since we’re gonna be in the same movie and everything, he doesn’t want me to stand next to you if you look like that so I’m gonna need you to put on 25 lbs real quick cool thanks.” 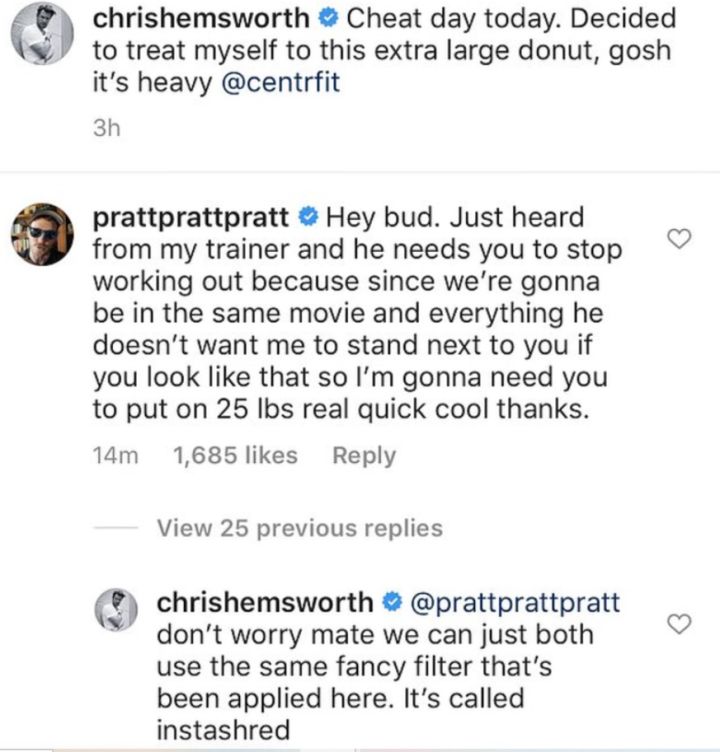 “Don’t worry mate we can just both use the same fancy filter that’s been applied here. It’s called Instashred.”

Tessa Thompson and Natalie Portman will also star in the new Thor, which is set to feature Christian Bale in a still-unknown villain capacity.