Welcome to another instalment of broken dreams and trampled hearts. Nom Queen, Nigella Lawson has reportedly thrown in the tea towel on her marriage after her husband, billionaire advertising tycoon Charles Saatchi, hugged her neck with a closed hand and squeezed it in non-affectionate ways, at their favourite restaurant in East London.

Reports deem the actions “strangling” and “choking” and pictures snapped by onlookers do not suggest otherwise. An unforgiving image was then featured on the cover of Britain’s Sunday People magazine. 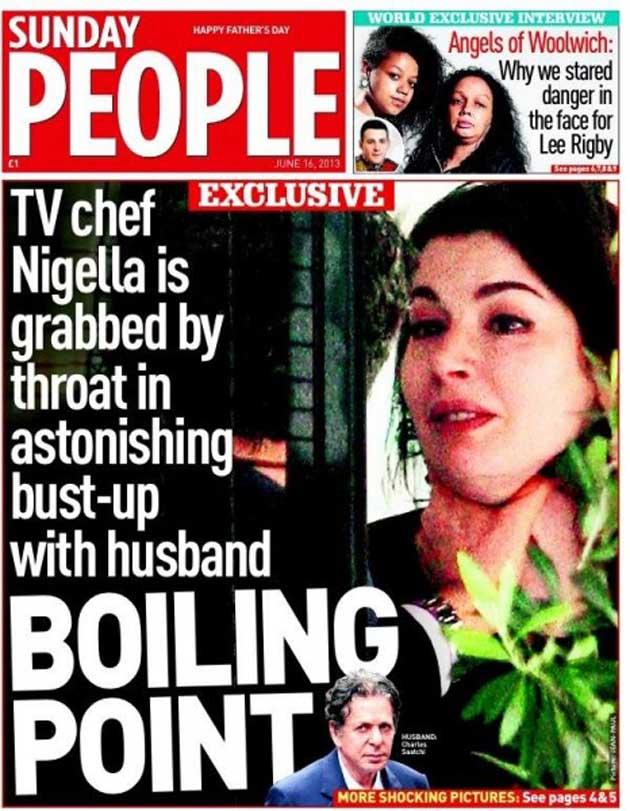 The Mirror, owners of Sunday People, report that co-founder of global advertising agency Saatchi & Saatchi– the world’s largest advertising agency in 80s— “launched a tirade of angry words. Four times he grasped her around the neck with Nigella, 53, looking powerless and petrified.

At first he used only his left hand, then both. At one stage he tweaked her nose then pushed both hands in her face. Twice Nigella jerked her head backwards as if in fear.”

Nigella allegedly tried to pacify him by placing a hand on his and kissing his cheek. This quest for solace apparently occurred after she punished a glass of wine in a single gulp while he sucked back ciggies.

The pair have been married for ten years and live in a £12million converted warehouse in central London with three teenagers from their respective previous marriages. 90 minutes after her husband, Nigella fled the home with her youngest child, 17-year-old Bruno.

No bystanders intervened at the restaurant scene.