A Bunch Of Iconic Charmed Outfits, Ranked By How Impractical They Were To Battle Demons In

When it comes to iconique nineties / noughties television outfits, no TV show had better looks than bewitching series, Charmed.

But with the multitude of crop tops and mini skirts that were worn throughout the series, I can’t help but feel like the sisters often chose fits that would most definitely have been a hindrance on their demon-fighting capabilities.

Like, if it was me I’d be wearing some sensible shoes and activewear to fight evil? But hey, that’s just one man’s opinion.

Here, I’ve ranked a bunch of fabulous but futile outfits that probs weren’t the best choice when heading out to destroy forces of evil. 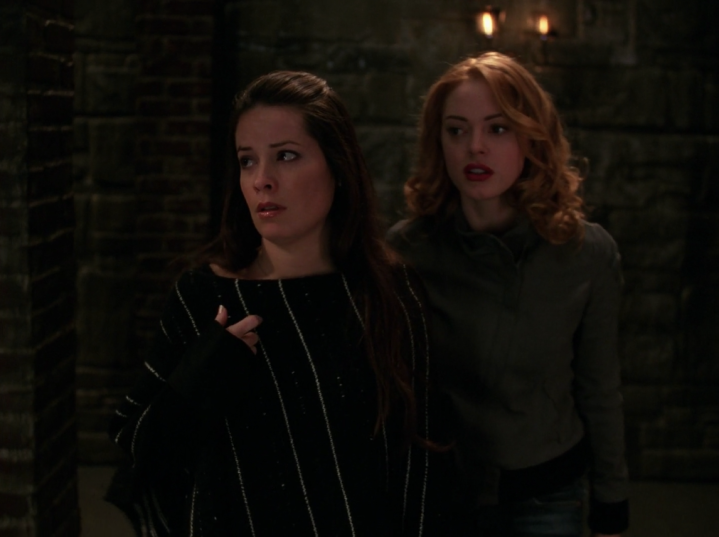 A poncho, Piper? For entering a demon cave to fight a swarm of demons (who are literally called the Swarm Demons) that multiply every time you kill one? Really? That’s what you chuck on for this occasion?

Behind the scenes tea: Holly Marie Combs was pregnant at the time, so they were just trying to hide her preggo belly here, but still, it definitely qualifies for the list of inappropriate garb, although I’ve put this at the tail-end because at least they have an excuse.

Meanwhile, you’ll notice that this is the only time Piper appears on this list because of all the Charmed sisters, our gal Piper was the most sensible when it came to choosing outfits to kick ass in. 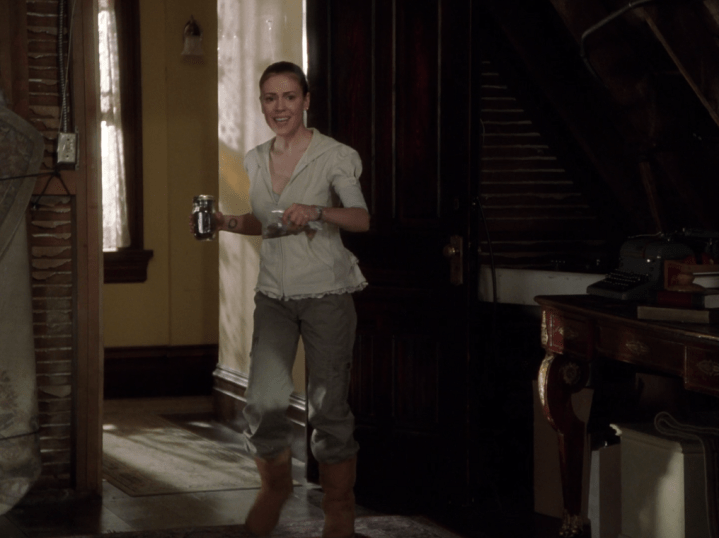 Not a day goes by where I don’t think about the fact that Phoebe wore ugg boots, UGG BOOTS, for the Ultimate Battle in Charmed. 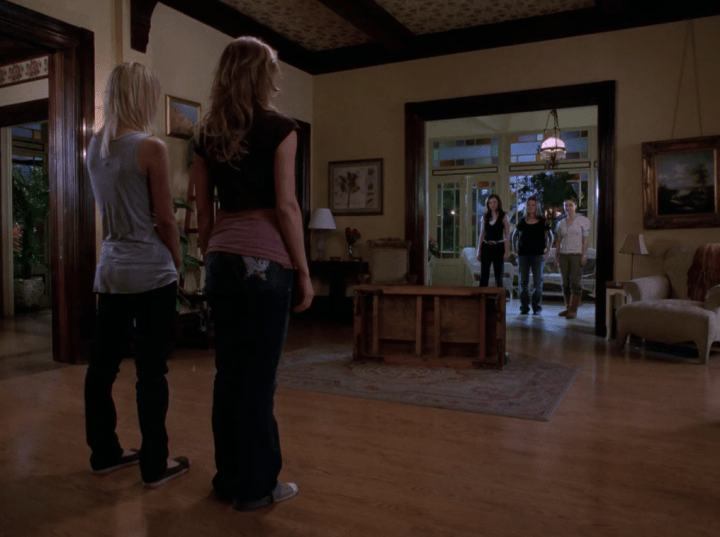 It’s not that they’re a deplorable fashion item, because back in 2006 they were all the rage, but because she was literally facing the most powerful evil that they’ve ever come across, and with the amount of running and combat involved, you’d think she would’ve opted for comfortable sneakers that’d offer her support.

But nup, she went with Ugg Boots, which were not only impractical, but from a 2021 lens, rather hideous, and in that episode she died as a result (spoiler alert) and honestly? I blame the boots. 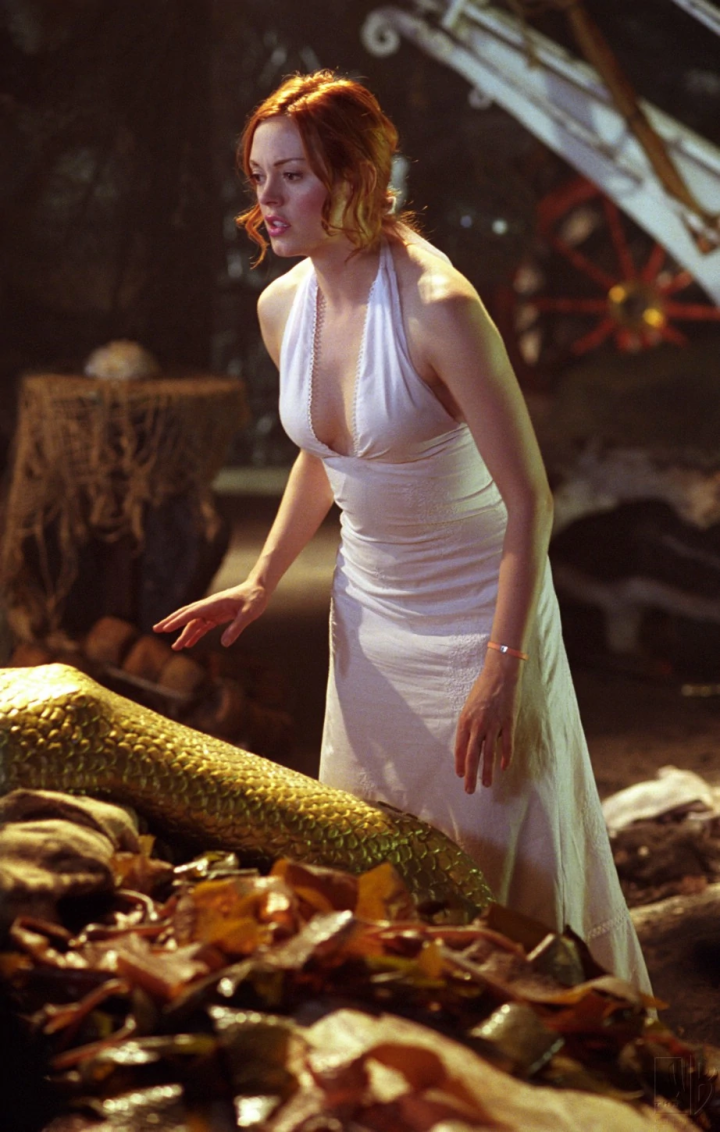 Hot tip: When watching Charmed, you can always tell what decade we’re in, not just from the absence of Prue (Shannen left in 2001, FYI), but also based on what they’re wearing. The other outfits on this list are v. ’90s and this one is v. ’00s, isn’t it? That halterneck.

But as gorg as it is, I’m not sure why Paige thought a constricting dress that goes riiiiiight to the floor would be a fabulous lewk for fighting both Necron (a skeletal demon) AND the Sea Hag.

At this point in the ep, Phoebe had run away from home to be a mermaid (really) and both Paige and Piper were freaking out, trying to bring her back, all the while battling the aforementioned evil beings, and she thought this dress was the best choice for the rescue mission? Hm… 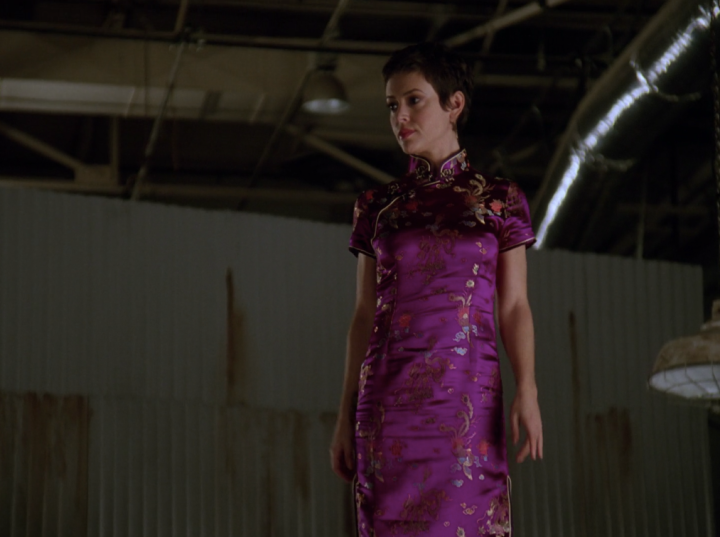 I haven’t included any Charmed outfits on this list that the sisters were wearing when they were sprung upon by demons because it’s not like they knew they were going to have to fight evil and they have the right to look cute on their days off, right?

I also haven’t included any looks from when they were under a spell because they weren’t in their right minds at that point, but this one is definitely Phoebe’s fault because Chris (Drew Fuller) literally orbed to her to pick her up TO FIGHT A DEMON.

At the time she was living in Hong Kong with Jason (Eric Dane), hence the outfit, but as stunning as it is, it most definitely would not have been practical for the battle at hand.

In this scene, she’s levitated in mid-air, ready to fight a creature that resembles the green goo from Robin Williams‘ Flubber, and as you can see from the below screenshot, it didn’t go all that well for her, probably because she wasn’t wearing an outfit that assisted with mobility (especially in mid-air): 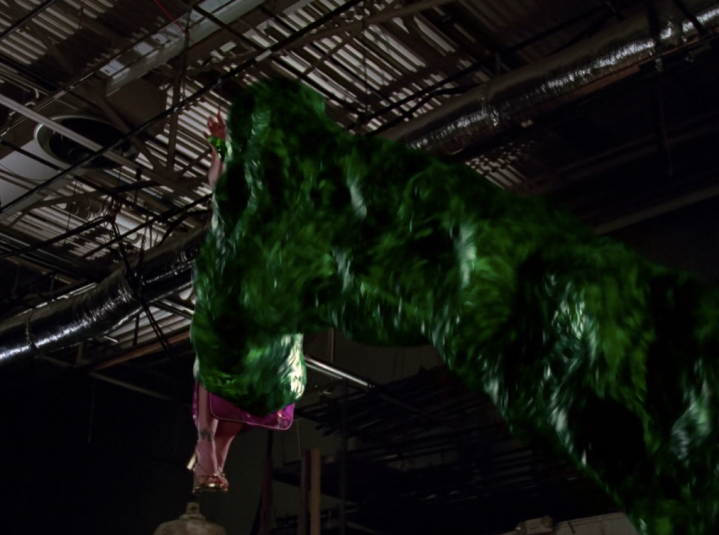 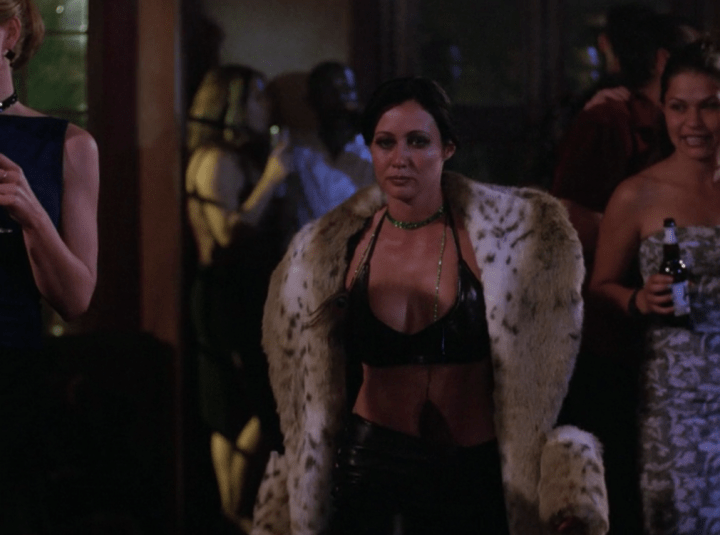 In the episode, Prue goes undercover as a hitwoman to infiltrate a Mafia-esque mob that’s being manipulated by a demon (yes, that’s legit the plot of the episode). So she dons outfits from the hitwoman’s wardrobe to blend in and while I ‘spose the leather pants aren’t a terrible idea, nor is the coat, but considering she had to battle not just a demon, but a crew of mafia thugs, was a leather bra and choker *really* the best decision? 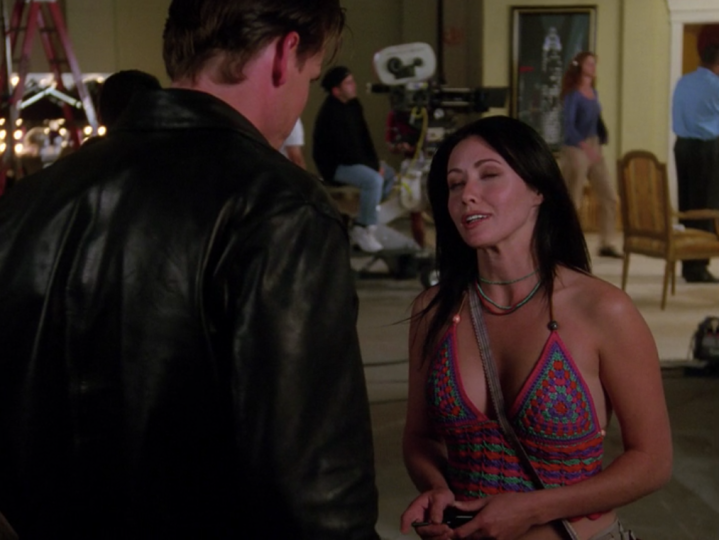 As much as I love love LOVE the knitted crop top (that’s not even sarcasm, I could legit see influencers flogging the shit out of that), in this Charmed episode, the sisters are chasing a murderous doctor who has accidentally stolen their powers, plus their magic is about to be outed to the world.

With the looming threat of exposure, along with the evil doctor on the loose, surely she would’ve needed more support than this flimsy fit? 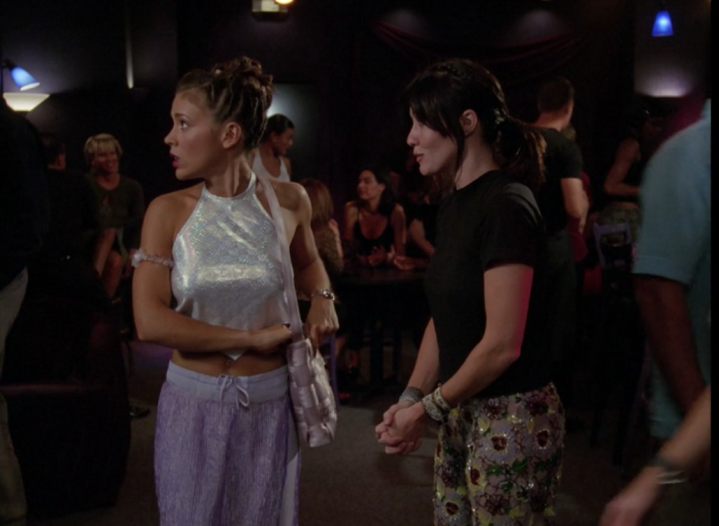 And finally, at numero uno, this shiny thing that’s iconic in all the wrong ways.

This is not just one of the most inappropriate demon-fighting outfits, but one of the worst outfits in general, but that’s no shade to the sisters because in the episode they admit that it’s tacky as hell (or should that be as tacky as the Underworld?).

For context, in this season 2 ep, a demon named Masslin is working with a band manager to feed the demon the souls of the band’s groupies, so Phoebe goes undercover as a groupie to come face-to-face with the demon and free his victims.

But my gripe here is that if you know you’re gonna be facing a terrifying creature that’s feeding off of innocent souls, wouldn’t you wear something that’ll help you in combat? Like, I dunno, pants?

Look at Prue’s pants in the above piccy, they’re fun and club appropes, and still super practical for fighting demons in! C’mon, Phoebe.

All eight seasons of Charmed are now streaming on Stan.

Tourism Whitsundays
There are no more articles to be viewed