If you caught the weekly social media segment on Channel Ten’s Breakfast program last week you may have noticed some awkward energy exchanged between spotty silverfox host Andrew Rochford (at right) and steel balled social media experts Dan Ilic and Brendan Maclean. You can watch the video here but it basically went down like this: Ilic, after running through some adorable cat videos and Carly Rae Jepsen memes, turns to Rochford and says “You know what I like about that is we didn’t get to Sydney Mining Herald, which unfortunately we couldn’t show.” After an awkward beat or two, Rochford replies “Hey Dan I told you not to mention that, well done, congratulations.”

The video Ilic was referring to was a recent viral parody of the Sydney Morning Herald’s “we say no” campaign, created by Ilic for his live format comedy show, A Rational Fear. Sure, it’s self-serving of him to include it but it’s certainly relevant isn’t it? So why was it vetoed? We called up Dan to find out.

So Dan, can you tell us a bit about your social media rundown for Channel Ten the other day? We felt like there was something odd going on beneath the surface. Yeah. So Brendan Maclean and I do a social media segment every week for Ten. What we do is basically ripoff the Buzzfeed homepage and put three or four different memes together and talk about them on the show. This week I decided to throw in the Sydney Mining Herald video because it’s a genuine meme that had gone around the internet and had generated some viral energy, basically it’s a remix of the Sydney Morning Herald campaign which we dubbed and graded and you guys ran last week and it was good, it made it into the rundown and everything looked great. But before we went on air it was explained to me that the video wouldn’t be running “for obvious reasons”.

That’s pretty vague. What did you think “obvious reasons” meant? I think the exact words were “obviously Dan, we can’t run this” and there’s probably enough ambiguity in that statement where I can’t conclusively say what those obvious reasons are. But the way I see it it could only be one of two things, it was too high-brow for the segment or it makes fun of a major shareholder of the network.

It’s ironic in a way because if it’s the latter then that’s the exact fear of the video itself. It’s interesting because on other shows on the network they would be less afraid to do something like that. But I think on that show in particular they are trying to keep it as safe and as broad as possible. It’s obvious that a set of opinions and opinion makers will be favoured on certain networks and publications. Just look at Andrew Bolt. He’s a funny, charming, clever guy who writes very opinionated stuff and his opinions echo those of the media proprietor he works for. I mean, this is nothing new. I’m sure the main reason anyone buys a media property is to use it as a personal mouthpiece or as an influential voice for their own benefits. It’s really nothing new. The only reason you would buy a media company in Australia is for influence – just look at how much money they make. They don’t make heaps of money. Television still makes quite a bit of money but newspapers don’t and the only reason business people own newspapers for example is because they’re a complimentary piece for their businesses.

Do you think this is a genuine concern for the general public? I don’t know. I think the general public is happy as long as they’re getting MasterChef. I think if Gina Rinehart took out MasterChef there would be a massive problem. I honestly don’t think that the general public care all that much. I think the people who care are the ones who are interested and invested in media, and in democracy and in the notion of free and unbiased thought, and that notion is quickly being diluted.

What compelled you to pipe up even though you knew it wasn’t going to be in the segment? I just thought it would be funny. Also, I let my ego get out of control a bit and took it as a personal attack.

Screengrabs from the segment, with captions informed by Brendan Maclean’s facial expressions… 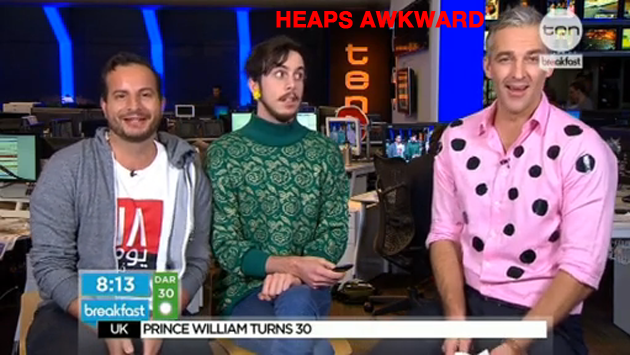 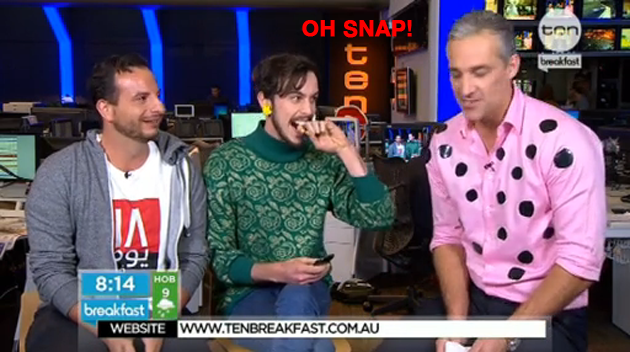